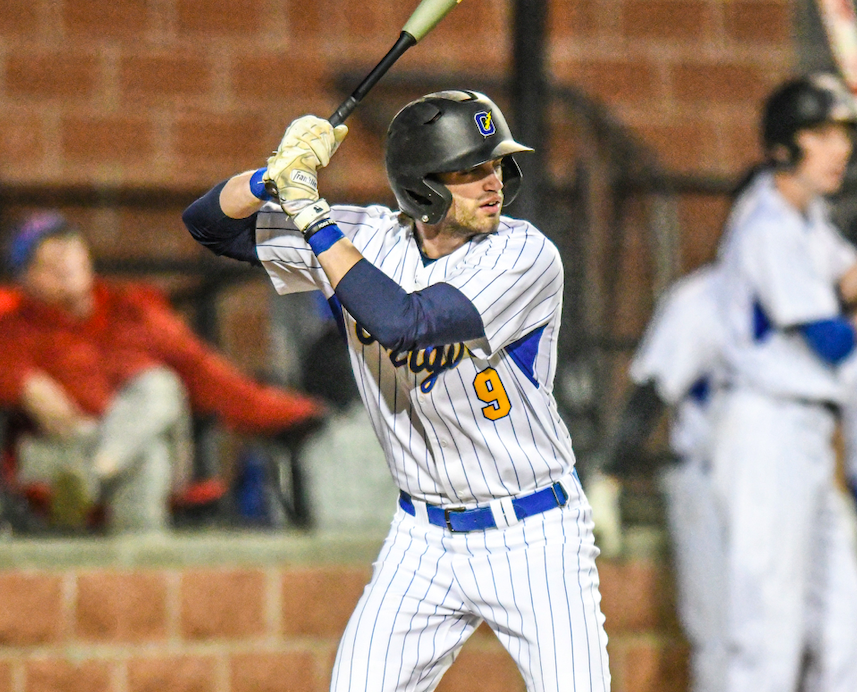 When Kelly Crumpton moved to Oxford he had never hit in the leadoff spot before, but that quickly changed for the former Jackson Prep standout.

The addition of Crumpton, along with Ben Goubeaux, boosted the Chargers offense in 2021. Crumpton’s move to the leadoff spot was an adjustment, but he managed to quickly find success there to be the EAGLE’s Player of the Year.

“One thing we worry about with new guys, especially as late as they came in, is how they’re going to mesh and mix with the kids we already have,” said former Oxford head coach, and new Co-Activities Director, Chris Baughman. “Those two came in, they fit right in from day one. I remember both of them the day they were enrolled, going around and introducing themselves to every player and every coach.”

Blending in two new players into the starting line up worked. After a little bit of an early struggle, hitting around .250 at the plate the first month of the season, Crumpton began to find hid footing and comfort once moved to the leadoff spot.

While playing at Jackson Prep, Crumpton always hit in the second spot of the lineup. When Lock Elliott returned to the lineup after suffering a hamstring injury early in the season, Baughman bumped Crumpton from the third or fourth spot to leadoff.

The ability to have a handful of at-bats in by the first three or four innings due to hitting leadoff appealed to Crumpton. The senior thrived, hitting .420 by the end of the season.

“The leadoff spot was out of my comfort zone at first, for sure, but it wasn’t long before the move started to pay off for the team,” Crumpton said.

Finding his comfort zone also paid off for Crumpton, leading the team in home runs with six and 20 runs batted in. Of his 37 hits, 15 of them went for extra bases with seven doubles and two triples.

Crumpton also spent time on the mound. When playing for Jackson Prep, he pitched against Oxford in one of the final games of the 2020 season before the COVID-19 pandemic canceled the season.  At Oxford, Crumpton was used sparingly with five appearances but did record two saves.

Making the transition from Jackson Prep and the Midsouth Association of Independent Schools (MAIS) to a school in the Mississippi High School Activities Association (MHSAA), especially to a Class 6A school such as Oxford, can also involve some growing pains. For Crumpton, there were not many of those as Jackson Prep would play many MHSAA schools during the season.

“The competition was significantly better in 6A but I feel that helped me adjust to the competition because I’m used to playing the game fast ,” Crumpton said.

Similar to Sam Bianco ending the long stretch of Biancos on an Oxford baseball roster, Hays Roth ends the long run of a Roth in a Charger uniform. Following in his brother Houston’s footsteps, Roth was one of Oxford’s anchors at the plate and on the mound.

Roth hit .382 at the plate for 25 RBIs and two home runs. He finished with 13 extra base hits with nine doubles and a triple. On the mound, Roth went 5-2 in nine appearances with an earned run average of 2.54 and a team-best 64 strikeouts.

“I’d give my right arm to see another Roth come through,” Baughman said. “(Roth) was unbelievable for us the last four years. How he performed at the plate this year, especially through his injury, he was our most solid bat from day one through game 30. On the mound you knew what he was going to give you. …He’s the best overall captain I’ve ever had.”

On the mound, Wicker was nearly untouchable with a perfect 7-0 record in nine appearances. He finished with a 1.79 ERA in 47 innings pitch with 60 strikeouts and walked only 13 batters. At the plate, Wicker hit .211 for 14 RBIs and four extra base hits.

“Ty threw some tough outings for us,” Baughman said. “He threw a 2-1 ballgame at Lafayette. He threw a Houston game here. He threw some games where we may not have played as well, but early on he was un-hittable. He was two pitches and that’s the thing with Ty that made him, at this level, what he did this year so unique.”

Tarver led the Commodores at the plate with a .361 batting average and finished with 24 RBIs and two home runs. He led the team in doubles with nine. On the mound, Tarver had a 5.48 ERA and a 4-5 record in 11 appearances and finished with 44 strikeouts in 38.1 innings pitched.

“Taylor was our best offensive guy this year,” said Lafayette head coach John Walker. “Most productive offensive guy this year and there really wasn’t a close second when you look at (our whole offense). He was easily our best guy. Came through in the clutch a lot of time and had several extra base hits that kind of opened some things up for us when we were struggling to get guys in scoring position.”

The duo of Loper and Varner proved to be a strong one-two punch for the Commodores on the mound.

“Blake had a really good offensive year for us. Kind of the guy we expected him to be, offensively,” Walker said. “Found his way on base a good bit. We both know what both of those guys, the pitching was the big thing. We rode them as far as we could ride them this year. They ate up a bunch of innings. If you look at Wilson’s record, record-wise it wasn’t great but the numbers were pretty impressive.”

Carothers and McCray had outstanding seasons at the plate for the Blue Devils, leading the way on offense. Carothers had a team-high .470 batting average and 35 RBIs while McCray hit .452 for three home runs. McCray also had a 1.5 ERA on the mound for the Blue Devils.

Kuykendall finished with a .357 batting average and two home runs.