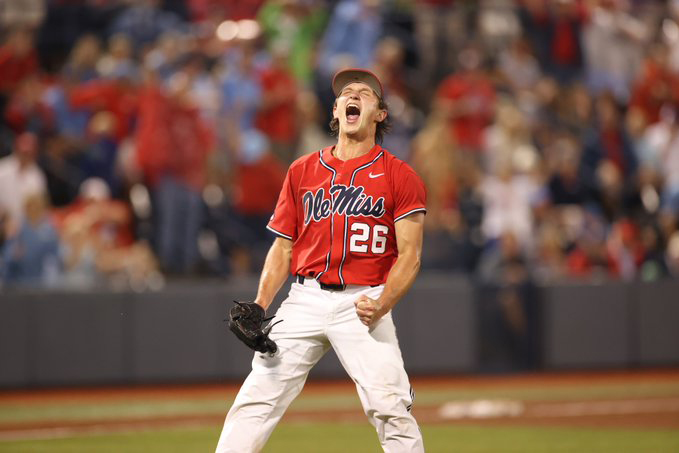 The All-American honors continue to roll in as Baseball America tapped Doug Nikhazy and Taylor Broadway, giving the Ole Miss baseball pitchers their second All-America nods in as many days.

Nikhazy was selected as a First Team All-American for the third time this season, joining First Team honors from Collegiate Baseball and NCBWA. Broadway notched his second honor of the season, adding a Third Team nod from Baseball America to his First Team designation from NCBWA that was announced yesterday.

The junior out of Windermere, Florida, earned his program-record 12th win of the season in Saturday’s Super Regional win at No. 5 Arizona. He struck out 10 in the victory, his eighth 10-strikeout performance of the season, to give him 142 on the year. The final outing pushed Nikhazy past Will Kline (134 in 2007) and Drew Pomeranz (139 in 2010) to second on the Rebels’ single-season strikeout chart, behind only Lance Lynn’s 146 strikeout effort in 2007.

With his All-American selections, Broadway joins the likes of Scott Bittle, Parker Caracci and Stephen Head in a growing line of Rebel All-American relievers. The senior out of Cypress, Texas, set a program record with 16 saves in 2021, three more than any other single-season effort in program history. His 16 saves this season alone tied him for eighth on the Ole Miss career saves chart.

He finished with a 4-3 record and a 3.44 ERA in addition to his 16 saves and posted a 2.51 ERA over his 29 relief appearances. The Rebels’ unquestioned go-to reliever struck out 66 batters and walked just nine this season. His 30 total pitching appearances are tied for the second-most in a single season in program history.

Ole Miss is one of just six teams with multiple Baseball America All-Americans.