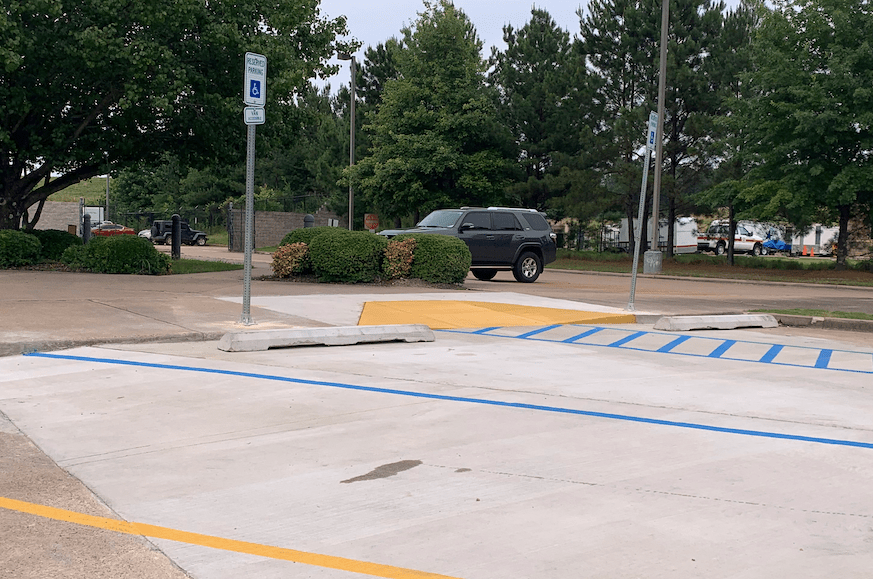 The accessibility parking spots at the Oxford Post Office were recently renovated to meet the current requirements by the Americans with Disabilities Act code. The Mayor’s Commission on Disablity Access sent a letter to the US Post Master General last year asking for help in getting the parking spots renovated. (Jake Thompson/Oxford Eagle)

Accessibility parking at Oxford’s post office has been an issue over the years, but a letter to the US Postmaster General Louis DeJoy from the Mayor’s Commission on Disability Issues helped spark change.

The two accessibility parking spots located in front of the post office’s entrance were renovated and updated this week in response to a request from the commission’s letter sent to Washington, D.C.

Cameron Stubbs, who serves as the commission’s chairman and uses the accessibility spots noticed construction on the two spots earlier this week, which came as a pleasant surprise as they had not received any response to their letter from DeJoy.

“Just this past week, I just happened to be coming in from out of town and probably running to Kroger and they were striping it and pouring concrete,” Stubbs said. “So, seems like our request was heard. Big win for the city.”

While Stubbs said he had not received any correspondence back from DeJoy he did say that he did receive emails from regional leadership of the United States Postal Service asking for grades and specifics of the accessibility parking spots, which the city sent them. There was not any further correspondence betweeen USPS and the commission until Stubbs saw the work done this week.

Before sending the letter, Stubbs noted one person had slipped when trying to use the accessibility ramp and emailed a complaint. Stubbs himself went to inspect the area and was also going to send an email, but then another incident at the post office presented Stubbs and the commission another way to relay their concerns and request.

The letter, which the commission drafted and sent May of last year, was prompted after a sinkhole had formed in the back parking lot of the post office a month prior. Seeing an opportunity, Stubbs and the commission decided to sent a letter to the head of the USPS regarding their desire to see the parking spots updated.

Along with the letter, the commission took photos of the parking spots while they were being in use to show the challenges and difficulties of the accessibility.

“(The sinkhole) will bring construction crews and funding to the facility, and we believe that this is the perfect opportunity to for you to make right such a longstanding wrong,” the commission’s letter read.

According to the letter, Oxford’s current post office, located at 401 McElroy Drive, was constructed in 1998. During the construction, then US Attorney General Janet Reno sent a formal letter to the city informing its leadership that they had no jurisdiction over the construction of the facility. That led to the parking spots and accessibility to remain in its original construction for 23 years, until this week.