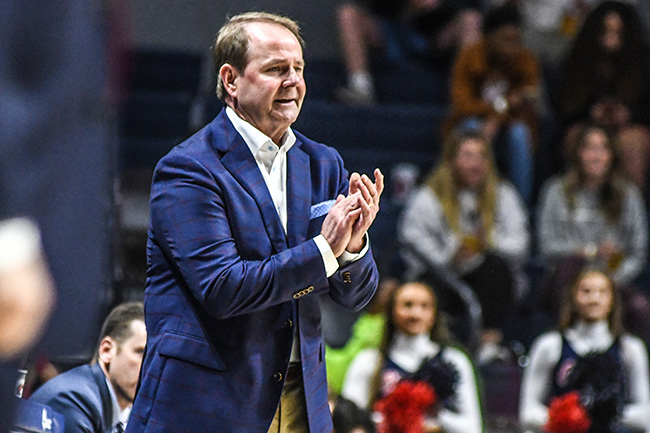 Mississippi head coach Kermit Davis claps during the game against Seattle at the Pavilion at Ole Miss in Oxford, Miss. on Tuesday, November 19, 2019. (Bruce Newman, Oxford Eagle via AP)

The Ole Miss men’s basketball team has released the home non-conference portion of its schedule for the 2021-22 season. Hosting nine non-conference foes in addition to having nine home SEC games, the Rebels are set for 18 contests inside the Sandy and John Black Pavilion at Ole Miss.

“I think this is the very best home non-conference schedule that we’ve had since we’ve been here,” said head coach Kermit Davis. “With Dayton, Memphis and the Big 12/SEC matchup against Kansas State to go along with other excellent teams that have the potential to make the NCAA Tournament, I think our season ticket holders and players will have a lot of fun seeing us play this schedule.”

The Rebels open the season with a pair of home games, starting with a matchup against New Orleans on Nov. 9. Three days later on  Nov. 12, the night before the football team hosts Liberty, Charleston Southern comes to Oxford.

After the Rebels go to Charleston, South Carolina for a trio of games in the Shriners Children’s Charleston Classic (Nov. 18-21), they return home for a Black Friday on Nov. 26 battle against in-state foe Mississippi Valley State. Ole Miss closes out the first month of the season by hosting Rider on Nov. 30.

Four home games are sprinkled throughout the month of December, starting with Memphis making the trip to the SJB Pavilion for a Saturday contest on Dec. 4. Davis faces his former team, Middle Tennessee, for the fourth straight season when the Blue Raiders head south on Dec. 15. One year after making the trip to UD Arena, Ole Miss welcomes Dayton to the Magnolia State to complete a home-and-home series on Dec. 18. Wrapping up the 2021 calendar year, the Rebels face Robert Allen’s former team, Samford, at home on Dec. 21.

The ninth home non-conference game takes place in 2022 when Ole Miss hosts Kansas State as part of the Big 12/SEC Challenge. The two teams are set to meet for the third time in the challenge’s history.

While the dates of the home non-conference games are finalized, the 18-game SEC slate is still to be scheduled by the conference office and announced at a later date. The conference campaign is set for a mix of nine home games and nine road contests.

Season tickets for the 2021-22 season go on sale beginning this Thursday.