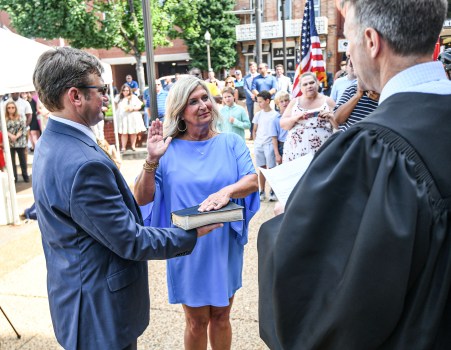 Rhea Tannehill, left, holds a Bible as Oxford Mayor Robyn Tannehill, center, takes the oath of office from Judge Gray Tollison during a ceremony on the Square in front of City Hall on Thursday. (©Bruce Newman) 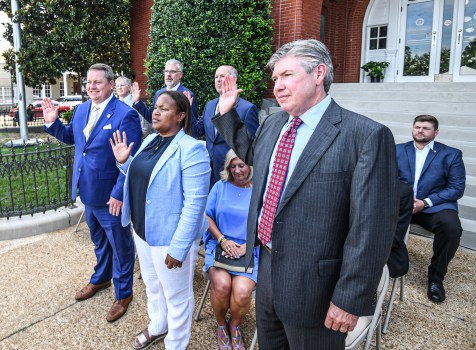 Oxford aldermen, front from left, Jason Bailey, Kesha Howell-Atkinson, John Morgan, and back, from left, Rick Addy, Mark Huelse, and Brian Hyneman take the oath of office during a ceremony on the Square in front of City Hall on Thursday. (©Bruce Newman) 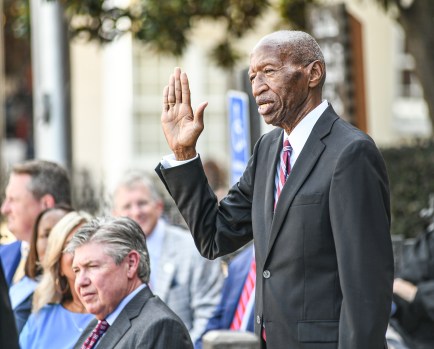 Oxford alderman Preston Taylor takes the oath of office during a ceremony on the Square in front of City Hall on Thursday. (©Bruce Newman) 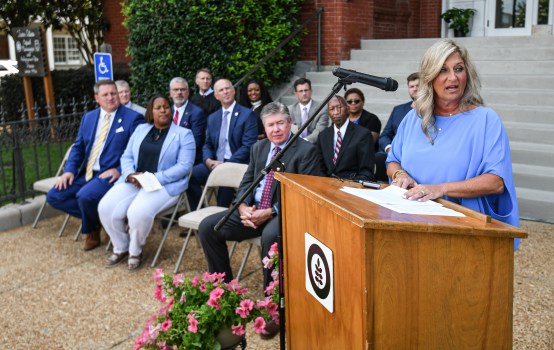 Oxford Mayor Robyn Tannehill speaks before she and the Board of Aldermen take the oath of office during a ceremony on the Square in front of City Hall on Thursday. (©Bruce Newman)

The City of Oxford’s leadership has officially taken office for another four years.

The 2021 Inauguration ceremony for Mayor Robyn Tannehill and the Board of Aldermen was held outside City Hall on Thursday, marking another term for Tannehill and five of the six Aldermen.

On June 8, Tannehill was re-elected for her second term as Mayor after taking office in 2017. Prior to being sworn in, Tannehill took the time to look back on her first four years and thank those who helped get Oxford through a pandemic as well as looking forward.

“It has been an honor to serve as your mayor the past four years and I am very grateful to have earned another term to build on the progress that we have all made together,” Tannehill said. “Over the past four years, we’ve made significant progress. Oxford is a dynamic, diverse city with a strong economy. As we welcome a new term, it’s worth taking a minute to reflect how far we’ve come over the past four years.”

For the first time in 24 years, Janice Antonow did not take the oath of office as Alderman. The former Ward 3 Alderman did not run for re-election which ensured at least one new face would be sitting on the Board this month.

Former Planning Commission chairman Brian Hyneman won the Ward 3 election and will serve on his first Board of Aldermen meeting next week.

“It is going to be surreal in the sense that it’s happened,” Hyneman said of sitting in his first meeting. “From January, we worked on our election, we worked on our campaign, we got elected and now it’s officially come around. I’m ready to go. Just like I said in the campaign, I’m ready from day one to go and start talking about the business of Oxford. I look forward to it.”

The new Oxford Board of Aldermen officially sworn in. pic.twitter.com/TsZcr6B7HY

There was a special swearing in for Ward 5 Alderman Preston Taylor. Taylor’s great niece, Hinds County Judge Crystal Wise Martin, was given the honor of swearing him in, separately.

The first regular meeting with the new Board will take place on July 6 at 5 p.m.