WELCOME BACK: Hoggard “excited” about returning to lead Oxford baseball 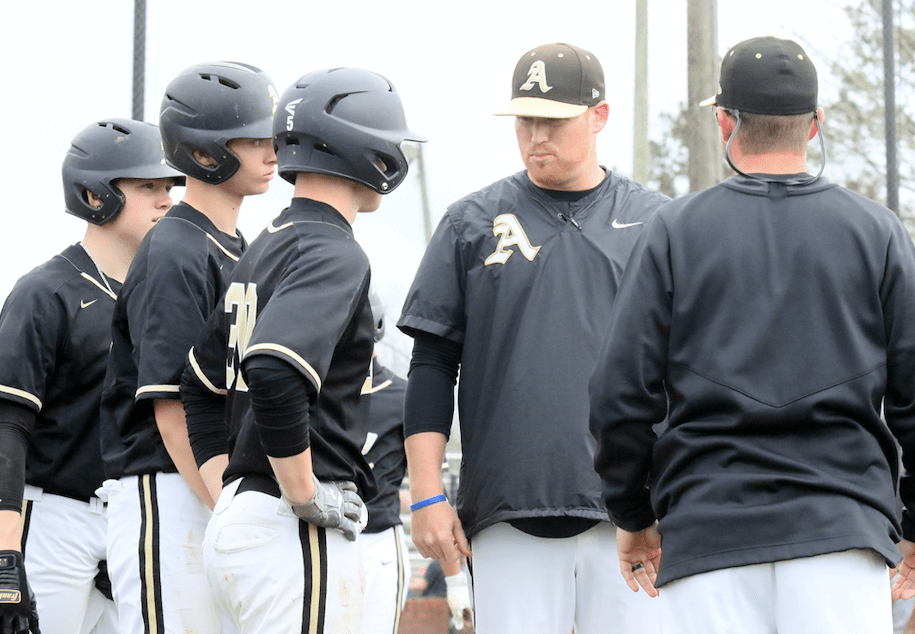 Former Amory coach Cade Hoggard, center, is returning to his alma mater after being hired as the new head coach for the Oxford baseball team last month. Hoggard helped the Chargers win a state championship in 2005. (Melissa Meador/Monroe Journal)

Cade Hoggard is very familiar with the tradition and expectations of championships that the Oxford baseball program has created over the last 16 years, and the reason he wants to come home.

Last month, Hoggard was named the next head coach of the Chargers, taking over for Chris Baughman who stepped away from his coaching duties to become one of Oxford’s newest co-Activities Director. The hire brings Hoggard back to his alma mater, where he helped the Chargers win a state championship in 2005.

“It was (one of those things where) I never really thought about it,” Hoggard said. “Coming back here. There’s always been a part of me that wanted to come back. Obviously, these were great times in my life and I love Oxford. We were very happy at Amory and got a good ball club there, but when they made contact it was one of those things where the wheels started turning. I started getting pretty excited.”

Hoggard comes to Oxford after spending two seasons at Amory. Hired in the summer of 2019, Hoggard’s first year with the Panthers ended before it could really begin with the COVID-19 pandemic canceling the 2020 spring sport seasons.

In the one full season he had with the Panthers, Hoggard helped lead them a MHSAA Class 3A North Half appearance and two wins from Pearl and playing for a state title in May.

When searching for the Chargers next coach, and his successor, Baughman liked what he saw out of his former player — Baughman was an assistant coach during Hoggard’s playing days at Oxford — and wanted him back in a Charger uniform.

“It’s really cool to see him be able to come back and continue on this tradition,” Baughman said. “There’s no doubt he’s one of the fiercest competitors I’ve ever coached. He’s carried that on into his coaching. He’s a winner, a hard worker. He wants to see his kids succeed and he wants to see his kids, where he is, experience what he got to experience.”

Since making the move to Class 6A, Oxford has gotten close to returning to Trustmark Park and competing for another state championship. This season, the Chargers saw their season end in the second round against Tupelo.

Coming home and knowing the expectations is part of the allure for Hoggard, but he also knows what is expected of him. All of those factors add up to Hoggard enjoying the moment and the opportunity, but also acknowledging the pressure he is putting on himself of wanting to succeed.

“The standard at Oxford has just grown the last 15 years,” Hoggard said. “As far as me being an alumni, I’m going to enjoy it but at the same time there’s going to be, not pressure, but a mindset. It would be awesome to dogpile as a player and then come back and see them dogpile as a coach.”