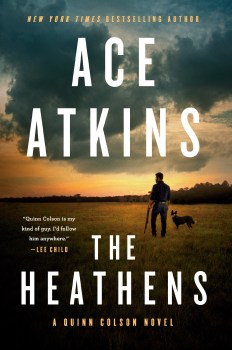 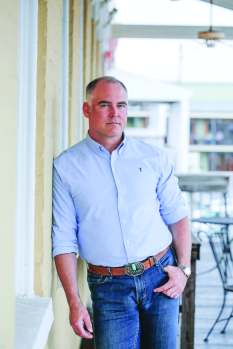 Ace Atkins will be in conversation on Monday at the Old Armory Pavilion as a Square Books hosts a “Tibbehah County Picnic” to celebrate the launch of his newest book, “The Heathens.” (Photo credit: Joe Worthem)

After over a year of online and virtual events, Square Books will host a fully open book-signing for local author Ace Atkins, at 6 p.m. Monday, July 12, at Old Armory Pavilion on University Avenue.

The event – styled as the ‘Tibbehah County Picnic’ – will launch New York Times-bestselling author Atkins’ latest book release “The Heathens,” which is the 11th installment of his popular Quinn Colson Series.

Tibbehah County is the fictional setting for the series about an Army Ranger who returns to his hometown in rural northeast Mississippi, only to find it’s been overtaken by crime and corruption. Last summer, development began on an HBO TV series based on the books.

Atkins will be in conversation with Emmy Award-recipient Jack Pendarvis, which has become a tradition for his local book launches – along with live music from Tate Moore of the Kudzu Kings.

Taylor Grocery Catering will be on hand, slinging some of the best-eating hot catfish on the planet. Also, craft cocktails by Hospitality Bruhs, and cold treats from Oxsicles.

The hosts urge attendees to bring their own chairs, as seating will not be provided.

The Picnic may further blur lines between the fiction and reality of Tibbehah County, but “it’s very much going to be a Lafayette County event,” and a “community event,” said General Manager of Square Books Lyn Roberts.

“Ace is not only a good writer, but he’s a great Oxford citizen,” Roberts said.

Square Books hosted what they called a hybrid reading last month at its usual venue, partner-store Off Square Books, but with occupancy limitations.

The Atkins off-site launch is Square Books’ first full capacity event since the start of the pandemic.  However, according to Roberts, some will remain virtual until the fall.  “It will be a case-by-case thing,” she said.

Atkins grateful that book series continues on with renewed excitement

Beneficial to readers of any series with numerous installments, Atkins’ allows one to jump in anywhere along the way – especially those fortunate enough to know North Mississippi, or the greater-Memphis area.

Such mentions of Payne’s Bar-B-Que, or a Waffle House off Highway 78 – or even ‘Live at 9’ with Alex and Marybeth on the television – in “The Heathens,” as with previous books, can quickly draw a Mid-Southerner into the flow of the storyline.

The comical and often dramatic excitement in Atkins’ gritty storytelling stands on its own, as does each novel.  Also, the author always supplies the necessary backstory where needed.

Fans of the series may recall the demise of queenpin Fannie Hathcock in the previous book, “The Revelators,” at the hand of Tibbehah County Sheriff Colson’s longtime friend and associate, U.S. Marshal Lillie Virgil.

Johnny Stagg, the cherry-red Cadillac El Dorado-driving top-dog scofflaw in town, who’d just been in prison for several years, is back pulling strings behind sordid local affairs.  He has new ambitions to convert what was Hathcock’s vice den off Highway 45 – once popular with a legion of truckers – into a family-friendly amusement center.

A group of kids, led by disadvantaged 17-year-old TJ Byrd, are on the run from law enforcement because of their suspected connection with the gruesome murder of Byrd’s mother, who has an unsavory reputation in Tibbehah, and some history with Virgil.

According to Atkins, the story is loosely based on an investigation and trial that he covered as a young reporter for the Tampa Bay Tribune in the late-90s.

Good detective work by Colson, along with that of his former deputy Virgil, mixed with blunders and missteps by parties involved, gradually brings the truth surrounding the circumstances to light.

This page-flipper should quell the appetites of followers of the series, who await anxiously for Atkins’ practically-annual installments – or just general fans of the crime-fiction genre.

With regards to the Monday event at Old Armory Pavilion, Atkins said, “We’re doing this to not only launch ‘The Heathens,’ but also celebrate a return of book events for one of the best bookstores in the country.  Sometimes we forget what a special place we live in.”