Greg Sankey: Forfeited games could come into play due to COVID-19 disruptions 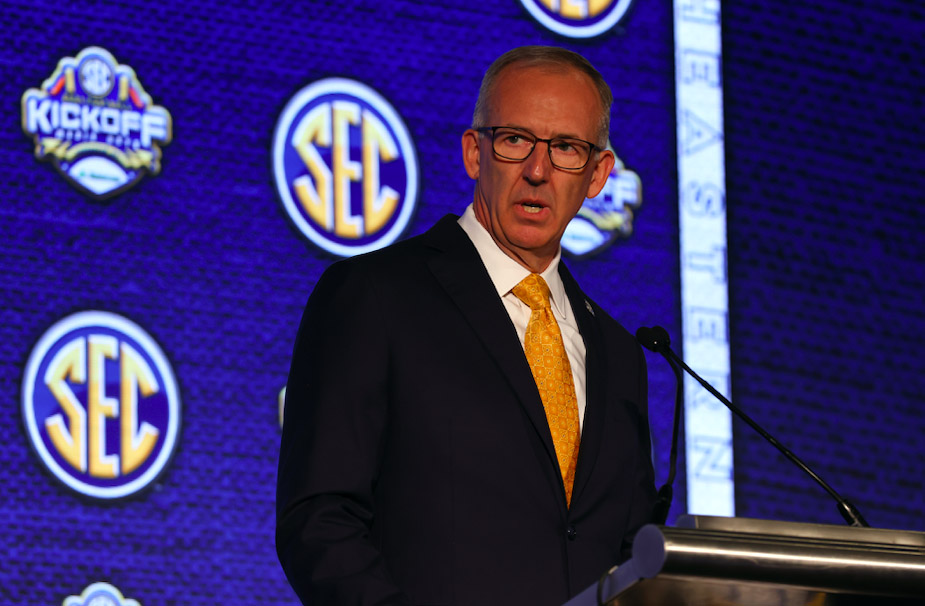 SEC Commissioner Greg Sankey speaks to the media during the 2021 SEC Football Kickoff Media Days on Monday at the Wynfrey Hotel,Hoover,Alabama. (Jimmie Mitchell/SEC)

HOOVER, Ala. — A year removed from the most unusual college football season in memory and still lingering remnants of the COVID-19 pandemic await the 2021 season.

During his appearance on Monday to kick off the Southeastern Conference’s Football Media Days, commissioner Greg Sankey discussed how the conference would deal with any COVID-19 disruptions that might cause teams lose games.

While no-contests were officially ruled last season when teams lost a scheduled game due to positive COVID cases within their program, Sankey hinted at the possibility of a forfeit coming into play this season, yet no official decision has been made.

“So lets just indicate like the realities we deal with. You hope not to have disruption, but hope is not a plan is the great cliché,” Sankey said. “We still have roster minimums that exist, just like last year. What I’ve identified for consideration among our membership is we remove those roster minimums and you’re expected to play as scheduled. That means your team needs to be healthy to compete, and if not, that game won’t be rescheduled.”

The roster minimums were put in place by the SEC for the 2020 season and as of now are still in place two months before the 2021 season begins. Those guidelines included at least 53 available scholarship athletes, including at least seven offensive linemen—one of which must be a center, one quarterback and four defensive backs. Teams were still able to play with fewer than the minimum, or with fewer at those aforementioned positions, but if they fell below those thresholds, the options of rescheduling that week’s game or declaring a no-contest were both on the table.

Ole Miss played nine of their 10 games during the conference-only schedule last season. The Rebels game against Texas A&M was postponed and moved from its original date of Nov. 21 and moved to Dec. 7 due to the Aggies having COVID case within the program. The game was then canceled after the Rebels reported COVID cases in their program.

“To dispode the game, the ‘forfeit’ word comes up at this point,” Sankey said. “That’s not a policy, and what you se are the bookends now for decision-making. We’ve not built in the kind of time we did last year, particularly at the end of the season, to accommodate disruption. And unless we’re going to do that, our teams are going to have to be fully prepared to play their season as scheduled.”

The SEC returned to its normal 12-game schedule for 2021, including four non-conference games and eight conference games. Ole Miss kicks off its season on Sept. 6 in Atlanta against Lousiville.