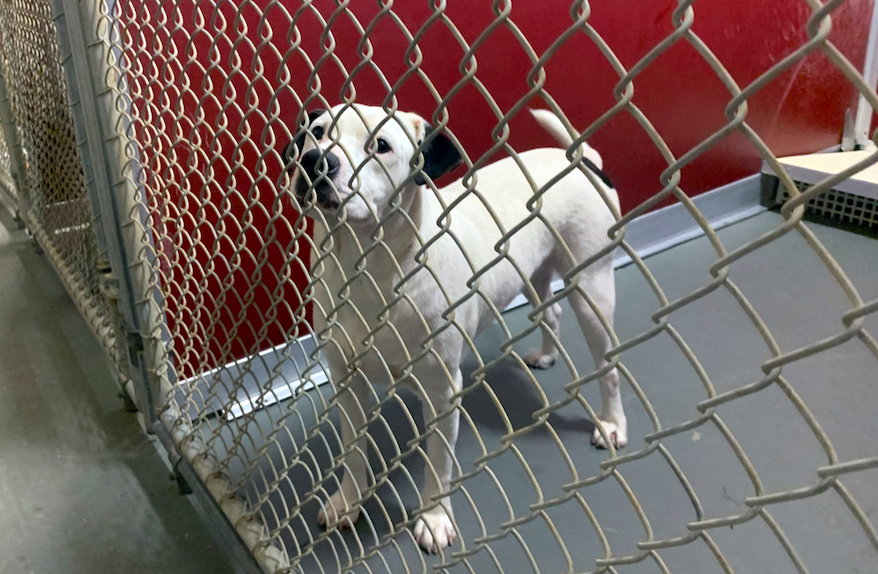 “Chloe” is one of many dogs currently available for adoption at Oxford’s Animal Resource Center. Last week, ARC posted they had reached capacity for dogs and needing fosters or new permanent homes for the animals they had. (Jake THompson/Oxford Eagle)

Oxford’s latest iteration of its animal shelter is still under renovation, but it is already experiencing vacancy issues.

The Animal Resource Center is under construction with no opening date, but organizers have been accepting animals and pairing them with potential adopters. And last week, it hit capacity for housing dogs.

Nicole Young, ARC’s new director, has been overseeing the renovation of the center into her vision and also dealing with the realities that strays and surrendered animals still need new homes now.

She’s facing lots of challenges, such as the new kennels that were ordered and have not arrived and navigating a building that is “constantly under construction.”

“So that added to it, and I think that another thing that adds to it is how long it was shut down,” Young said. “The strays were still here, they just weren’t able to be picked up. Then we had some people who needed to be able to surrender their animals, which a lot of those I have diverted and sent to rescues.”

The large dog kennels are full, but Young said she has more rescue commitments and people coming to look at them. Last week, three dogs were transported to a group in Tennessee, which helped open up some space in the center. Five cats were sent to Vancouver, British Columbia, Canada this week.

“I think the culprit here is timing,” Young said. “It’s not to say we’ll never hit capacity again; every shelter does now and again. It’s just a reality of it and it’s the time of year that it typically happens.”

One major project on Young’s list is an adoption center, something previous shelters in Oxford have not had in Oxford. While the center is not yet open to walk-ins due to the on-going renovation, people are still able to call ahead and set up a time to come look at a specific dog or cat, she said.

While the ARC’s kennels are full from animals surrendered inside city limits, Young said she continues to receive calls regarding animals throughout the county. Lafayette County does not have a service agreement with the city, so Young said she relies on animal shelters in neighboring areas, such as Water Valley and Tupelo, to help get the animals placed.

“We all try to help each other,” Young said. “Shelters try not to compete with each other, because we’re all in this for the same reason. It’s to save lives and improve the lives of these animals.”

To get in touch with Young or someone else at ARC for further information or to discuss potentially becoming a foster or adoptee, call 662-832-6727. All cats and dogs available can be viewed at oxfordms.net/oxfordarc/.