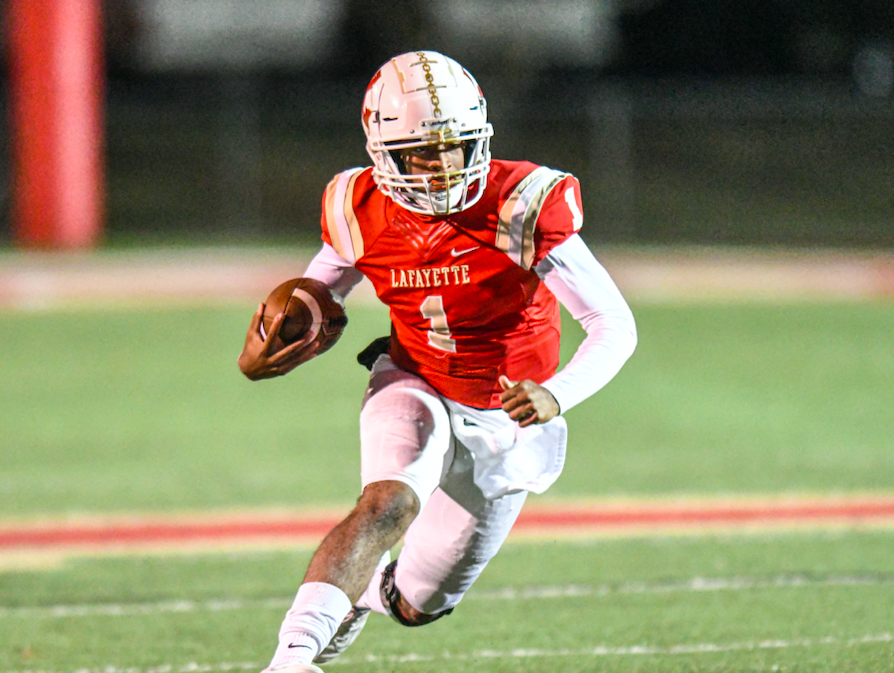 Lafayette High's Tyrus Williams (1) runs against Columbus at William L. Buford Stadium in Oxford, Miss. on Friday, October 30, 2020. Williams will miss his senior season due to having season-ending surgery on his shoulder. (@Bruce Newman)

Lafayette’s offense took a blow two weeks before preseason camp begins with the loss of its starting quarterback.

Tyrus Williams will miss the season after undergoing scheduled surgery for what head coach Micheal Fair described as a “nagging” shoulder injury.

While Williams will miss his final season of football, the potential he would not be available this fall was known by Fair and his staff. Backup quarterback Will Dabney will now move into the starting role for the Commodores when camp begins on Aug. 9.

“You always play through your mind, ‘Whats the worst case scenario in this situation.’ So, it’s not like it completely blindsided us,” Fair said.

During spring practice in April, Dabney took the majority of the snaps as Williams was playing baseball during that time. During the 2020 season, Dabney saw minimal action at quarterback where he completed five of eight pass attempts for 58 yards and a touchdown.

With Williams helping Lafayette on the baseball field, getting Dabney under center in the spring helped Lafayette throughout the summer and as they prepare to enter preseason camp next month. According to Fair, the loss of Williams and the addition of Dabney does not change up much of their offensive scheme or plans.

“We’re not that far behind as far as having a completely different offense,” Fair said. “Will has different strengths and weaknesses than Tyrus does. That goes from year to year anyway. It’ll change a little but it’s not like everything’s back to the drawing board.”

Last season, Williams threw for 1,119 yards and eight touchdowns but was also a weapon with his feet. He rushed for 462 yards and seven touchdowns on 55 carries.

Having the surgery in the summer gives the Washington State commit the chance to play baseball one last team as a Commodore come next spring. But the 2020 season will be Williams’ last for Lafayette.

“Of course it’s tough, (his) senior year of football season,” Fair said. “I know that it’s a big disappointment for him, for sure. That’s just one of those things that had to be done. Hopefully he’ll be back for baseball season.”

Lafayette opens the 2021 season on Aug. 27 against Tupelo.