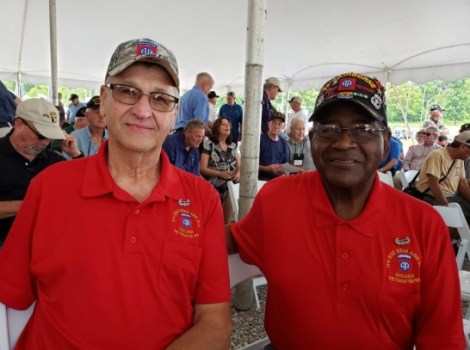 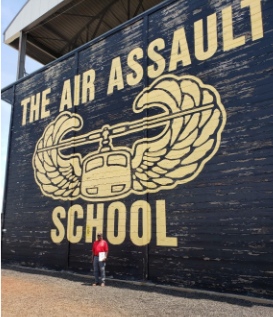 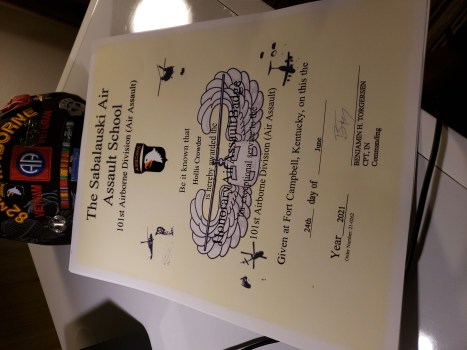 Honorary certificate giving recognition to Hollis Crowder for his service in the 82nd Airborne Division, whose techniques paved the way for the Air Assault School.

Hollis Crowder of Batesville recently received the Honorary Air Assault Badge from the Sabalauski Air School for his service in the Vietnam War.

Crowder and 400-plus 101st Airborne Division veterans received the honor at Fort Campell’s 2021 Week of the Eagle, an annual event to commemorate the past and the present of the division and its veterans.

“Getting the recognition for what we did back then was pretty special,” said Crowder.

The Air Assault Badge usually is awarded by the U.S. Army for successful completion of the Air Assault School, a 10-day course that trains in combat air assault operations, rigging and sling load operations and rappelling from a helicopter.

Crowder officially served two tours during the Vietnam War from 1968 to 1970 in a long-range reconnaissance patrol unit and completed his service as a sergeant.

However, Crowder and his cohorts were never recognized for their service until recently because the award never existed since the Sabalauski Air Assault School was founded after the 82nd Division was deactivated.

“We had to go into jungles and you couldn’t jump in on parachutes, so they documented what we did,” said Crowder. “We dropped down into jungles on ropes. Guys at the school who’ve just graduated, they were really honored to meet us. They say ‘We just have the drill sergeant yell at us when we’re coming down off the ropes. We don’t get shot at.’”

Techniques Crowder and his unit pioneered are taught at the Air Assault Jump School in Fort Campbell, Kentucky, and are used in Afghanistan and Iraq according to Crowder. Crowder is proud to have made history.

“That’s what was really special,” he said. “Years ago it was documented and now standing in front of that wall with the school and to know they modeled it after us ⏤ it’s like a book that they write about.”

Crowder now has the honorary badge to add to his collection of achievements which include a Silver Star, two Bronze Stars, a Purple Heart, a Cross of Gallantry and The Army Commendation medal.

After he left the Army, Crowder went to college and continued to serve his country as a veteran mental health counselor until he retired in 2002 and then as a missionary. He worked with World War II veterans to Korean War veterans, but he specifically worked with warzone veterans.

Crowder started working as a missionary with an African Methodist Episcopal church in California and continued working in affiliation with St. Andrews United Methodist Church in Oxford. He took over 20 mission trips to countries such as Mozambique, Ghana, Zimbabwe and South Africa to provide medical aid, disaster relief, water and construction to the local population.

Crowder officially retired in 2019 and has settled down on his farm with his wife Pamela in Panola County.