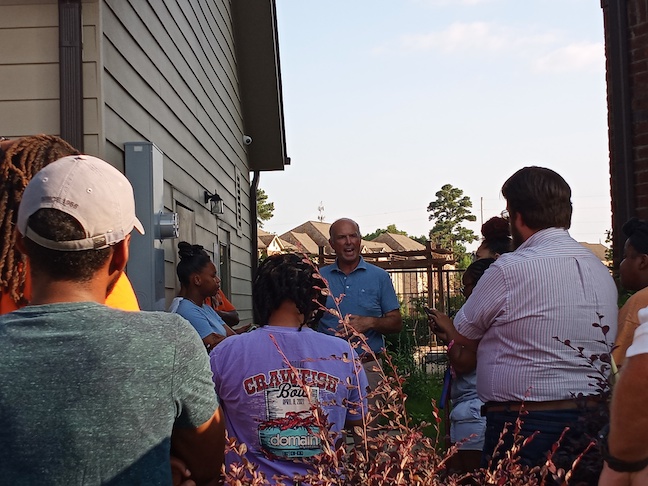 Alderman Brian Hyneman of Oxford’s Ward III talks with residents of Taylor Bend apartments about the future of the residents and the property.

Oxford Alderman Brian Hyneman this week reassured Taylor Bend apartment residents that water service will continue for the next month, despite uncertainty about the future of the complex.

The newly elected Ward 3 alderman met with residents outside the manager’s office at the complex on Wednesday. The meeting was prompted by sudden utilities cutoffs and the residents’ ongoing issues with the property owners and managers’ mismanagement.

The water and Internet were disconnected initially in Buildings 4 and 6 on July 20 and in the remainder of the buildings on July 21.

The property is to be auctioned for sale on Aug. 4. The sale will happen at the west front door of the Lafayette County Chancery Building from 11 a.m. to 4 p.m.

Before any of these come to pass, the current property owners can redeem their accounts and take charge once again, Hyneman said. If the owner does not come current and the property is not sold at the auction, the North American Savings Bank will take hold of it.

Northeast Power and Oxford Utilities will provide power and water for Taylor Bend until Aug. 31, 2021. After the month, residents can pay for power directly to Northeast Power because it is provided to units individually.

“The bank that holds the loan on [the property] has paid all the arrears and the owners have satisfied the electric department,” said Hyneman.

However, water will be a problem since it is directed to the entire building rather than a single unit.

“At the end of August, there will be another bill and we will see about that. It’s my effort to not interrupt your service,” Hyneman said.

In addition, the property’s telecommunications bill has not been paid, interrupting the fire alarm system For the time being, the OFD will dispatch personnel to the property to check every hour in case of a fire emergency.

This fire watch is necessary so residents do not have to be displaced due to unsafe conditions.

“We’ve given a time frame to the current owners and as of two o’clock (Wednesday), the current owners are investigating with the bank to see if they can get (telecommunications) back up,” said Hyneman. “We’re trying to resolve this and pushing to get this alarm system back up because we can’t send a firefighter down here every hour on the hour.”

Residents told Hyneman they have reported issues such as mold in washing machines, leaks, uncut grass and much more to managers since last year but have received no response or help. One resident reported having a broken air conditioning unit.

“What do I do if I’ve renewed my lease?” asked one resident. Many said they have signed new leases and have made payments to the company and are now seeking a return of their funds.

Hyneman said he was hesitant to give opinions and advice and encouraged residents to seek legal advice.

Hyneman and other officials are in contact with the bank and the attorney who represents Nelson Partners, LLC and will keep the residents updated on future developments.