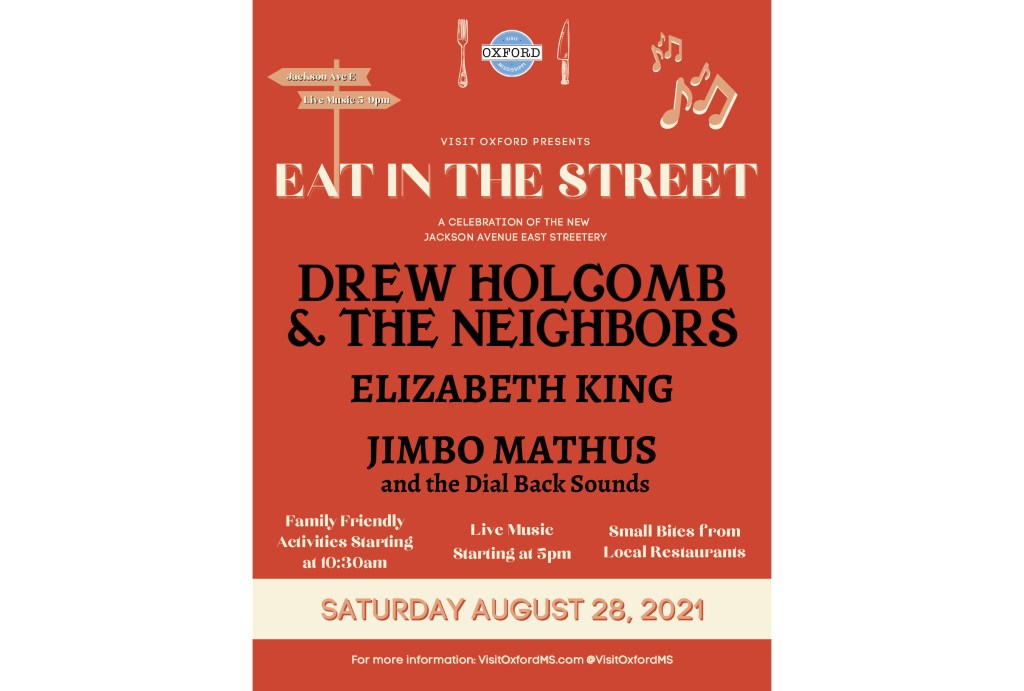 The East Jackson Streetscape project is on schedule to be completed this month and Visit Oxford is throwing a party to celebrate.

On Wednesday, Visit Oxford announced a new event called Eat in the Street that will feature food, activities and live music down the portion of East Jackson Avenue from Bouré to St. Peter’s Episcopal Church. The event is scheduled for Aug. 28.

The streetscape project expanded that area of East Jackson Avenue to widen the sidewalks and allow an outdoor dining area to help make the Downtown Square more pedestrian friendly. The project was scheduled to be completed by Aug. 17, but city engineer Reanna Mayoral informed the Board of Alderman during their meeting on Tuesday that construction was ahead of schedule and the road would be open to traffic by Friday. Mayoral also noted some minor projects would be completed in the next couple weeks.

Eat in the Street was created by Visit Oxford executive director Kinney Ferris and her staff to commemorate the project’s completion.

“We are thrilled that our visitors our visitors and community will now have a more pedestrian friendly area and that businesses will have expanded footprints,” Ferris said. “We’re excited to bring live music to the newly reconfigured street and celebrate that we now have permanent outdoor dining with ‘Eat in the Street.'”

With tables and chairs lining the middle of East Jackson Avenue, people will be able to grab food from “Small Bites” menus from restaurants located around the Square. Participating restaurants include Saint Leo, Moe’s BBQ and SoLa with more restaurants to be added.

A yoga session will be offered at 8 a.m. with instructor Lydia Siniard Foster in front of the Visit Oxford office. For anyone who wants to participate, they are asked to bring their own yoga mat.

From 10:30 a.m. to 12:30 p.m. a balloon artist will be set up on the lawn of the Visit Oxford office. From 1 p.m. to 4 p.m., Ole Miss athletics will set up in the parking lot behind Olive Juice Kids and offer interactive games for children.

Live music will begin at 5 p.m. with local singer-songwriter Jimbo Mathus and the Dial Back Sounds. Memphis soul gospel singer Elizabeth King will take the stage next. King, who recorded her first single in 1970, did not record her first album until this year.

The 77-year-old never expected to have a chance to record her album, but said “after all these years at my age, I never thought I would have another chance.”

Headliner Drew Holcomb & The Neighbors will take the stage at 7:30 p.m. The Nashville-based Americana act is making a return to Oxford after playing shows at The Grove amphitheater and other venues in years past.

“Bring your lawn chairs to set up in the street as you support local restaurants and businesses, as well as enjoy some great live music on our brand new streetery,” Ferris said.