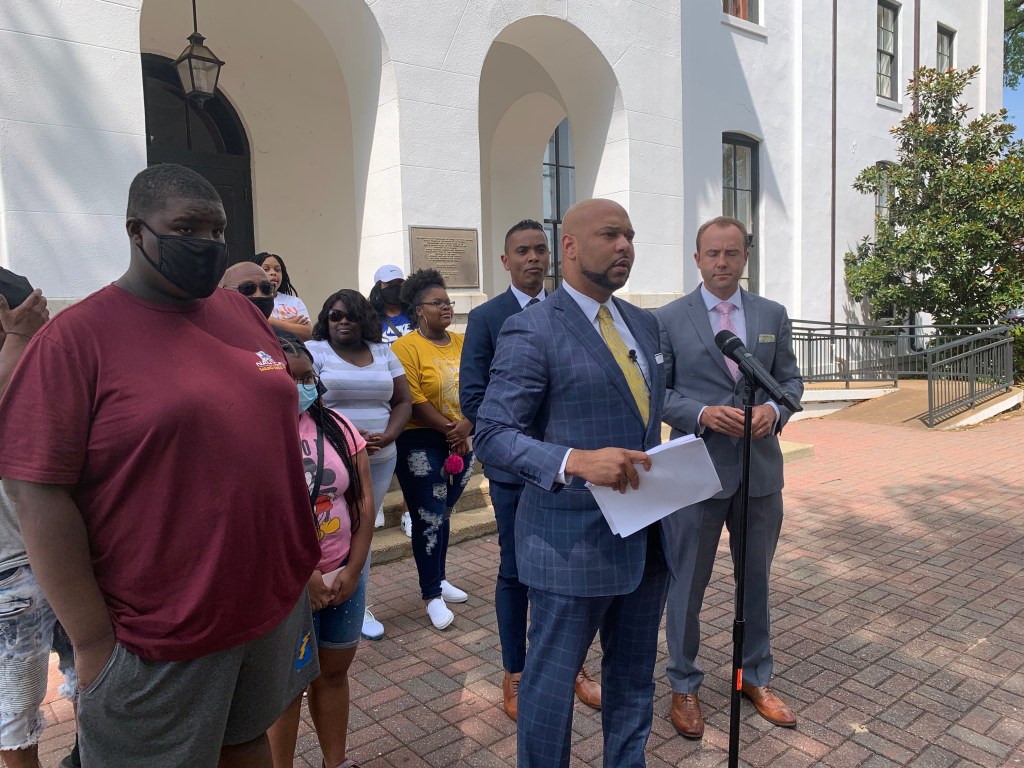 Attorney Carlos Moore speaks to reporters outside of the Lafayette County Courthouse on Thursday after filing a wrongful death lawsuit in federal court against the City of Oxford, Oxford police chief Jeff McCutchen and Matthew Kinne for the murder of Dominique Clayton. Members of the Clayton family were attendance. (Jake Thompson/Oxford Eagle)

The family of Dominique Clayton received justice in the criminal arena last week in New Albany, but in Oxford on Thursday they started the next chapter in seeking full closure.

Attorney Carlos Moore filed a wrongful death lawsuit with the US District Court for the Northern Division of Mississippi against the City of Oxford, Oxford police Chief Jeff McCutchen and former Oxford police officer Matthew Kinne.

Attorney James Bryant with the Cochran Law Firm out of Los Angeles, California and Michael Carr with Carr Law Firm out of Cleveland are serving as co-counsel with Moore in the lawsuit.

Kinne pled guilty to capital murder in the homicide of Clayton, who was found dead in her bedroom on May 19, 2019 after being shot once in the head while she slept. As part of the plea agreement, Kinne was sentenced to serve life in the Mississippi State Penitentiary without the possibility of parole. Now, the Clayton family wants Kinne to pay, financially.

The lawsuit claims that Clayton’s 4th and 14th Amendment rights were violated by the City of Oxford, OPD and Kinne. The suit continues to allege that Kinne admitted he was performing a welfare check on Clayton after the two got into an argument earlier in the night.

During the plea hearing at the Union County Courthouse, it was revealed Clayton and Kinne, who was married, had been having a relationship that had gone on for many months.

According to the lawsuit, Moore has an eyewitness who stated they saw Kinne get out of his OPD patrol car, still dressed in uniform, at Clayton’s Brittany Estates residence. The eyewitness stated he did not suspect anything was wrong with the situation due to Kinne being dressed in his police uniform.

“What Matthew Kinne did in his official police uniform, with his police issued weapon and in his official squad car was heinous,” Moore said. “But what our investigation has realized and revealed was in his confession he was going to do a welfare check. We have an eyewitness who says he saw (Kinne) pull up in a police cruiser. At night time, the police going to someone’s house, that’s not unusual. It did not cause any alarm because he was a police officer doing what police officers do.”

Moore also stated the City of Oxford should have been aware of the fact Kinne was “forced to resign” from the Olive Branch Olive Branch Police Department after Kinne’s first wife died. The death was ruled a suicide but Moore inferred both last week in New Albany and on Thursday that Kinne had something to do with her death.

The City of Oxford has previously stated it does not comment on pending litigation.

Any money the Clayton family receives from the lawsuit will be put into a trust for Clayton’s four children to have when they are older to help take care of themselves, according to Moore.

The City of Oxford, McCutchen and Kinne each have 21 days to respond after being served the lawsuit. The lawsuit is asking for an unspecified amount in damages and demanding a jury trial.

Community Church of Oxford ’embraces’ community with Back to…