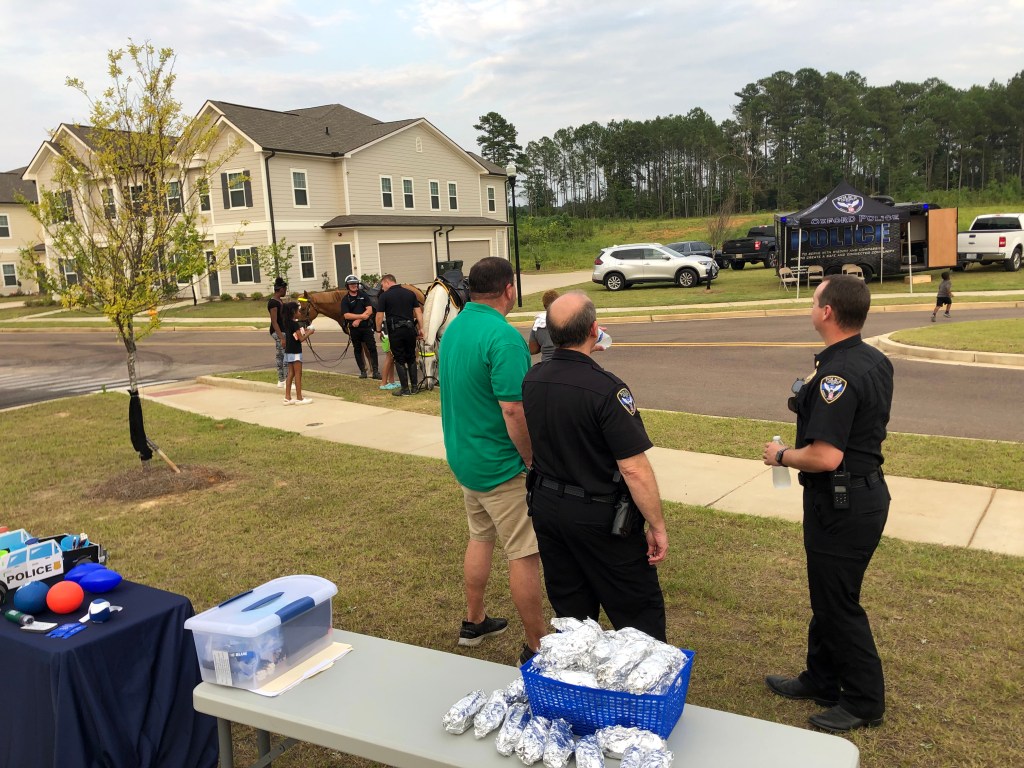 What started out as a question and answer session between members of a newly developed community and the Oxford Police Department has turned into a monthly gathering of fellowship.

Members of the Eastover community have been having once-a-month events, similar to a small block party, in conjunction with the department as Oxford’s police officers are working to bridge gaps and strengthen relationships.

Alderman Kesha Howell-Atkinson, who helped get Eastover and other affordable housing communities to Oxford, also has worked to get these events started after speaking with residents who had questions regarding code enforcement and other items.

Eastover, which reached full occupancy in 2020, became a part of Oxford after the city annexed more than 12 square miles in 2018.

“They had some concerns about the annexation with the fire hydrants and the street lights and wanted to know the police patrol and things like that,” Atkinson said. “So, I thought that we’d just come together and just put it all on the table. A new area had been added to the city so a lot of information kind of got lost in the transitioning into the city and kind of wanted to know what the city’s doing, not doing. So they wanted to kind of clear it up.”

The latest event was held last Monday, which was the third event that Oxford police chief Jeff McCutchen attended.

With the social unrest and the current events of the country in the last year and a half in the wake of George Floyd’s murder at the hands of an active Minneapolis police officer, the events between OPD and the Eastover community have helped repair any damage done or trust lost between the two groups.

“This is one of their concerns. They want more police presence. They want to know who is policing them,” Atkinson said. “I was like, ‘Absolutely. We’ll get them out there and learn their names and they can learn your names so there’s not an elephant in the room when you need to call them.’ Anybody can call. The police need them, as citizens, and they need to be able to depend on (the police) to make us safe. Who’s better to call than someone you trust, that you’ve seen out here.”

An OPD substation is located at the Eastover development, which helps keep a police presence at one of Oxford’s residential areas that is the furthest away from the main police station on Molly Barr Road.

Having a presence at Eastover and near other residential areas including Belle Rivers, the city’s other affordable housing development, and the Brittany Woods area helps continue to strengthen relationships in the community, according to McCutchen.

Throughout the first three events McCutchen has attended, he stated the attendance has grown as more community members have come out each month.

“It was just great to hear from the community about, ‘This is what we’re concerned about in our community. This is what we want you to focus on'” McCutchen said. “They helped us shape what we will do at the office … Once we meet each other and we start to build a relationship, we automatically treat each other differently.”

Atkinson and OPD plan to continue to have events on a monthly basis.