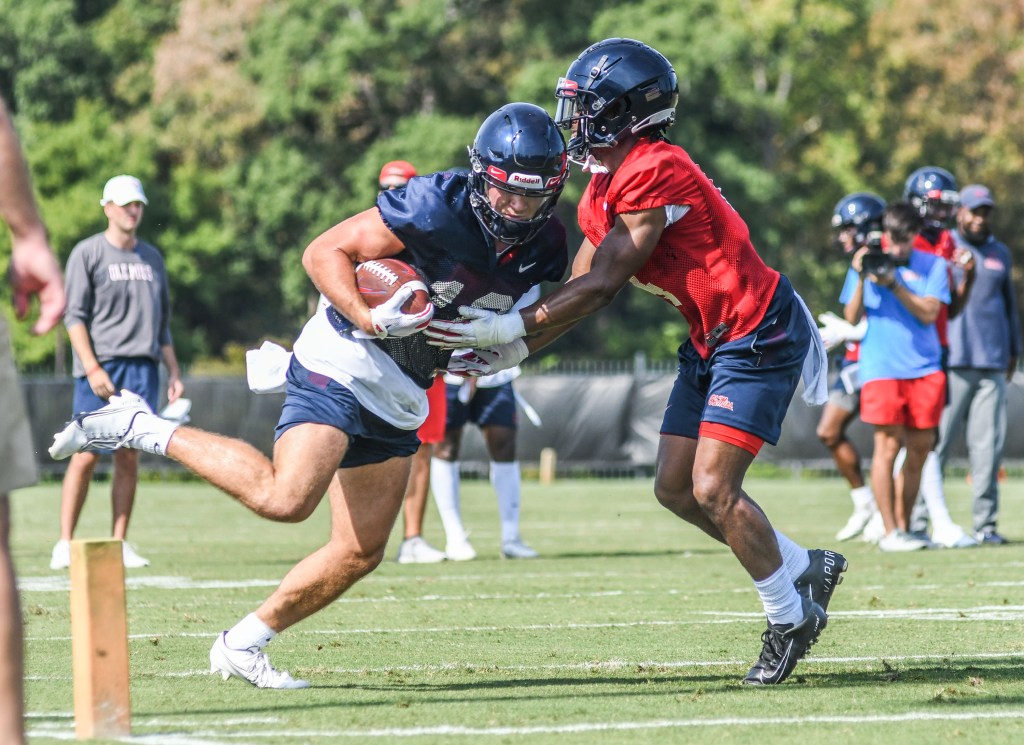 John Rhys Plumlee and Jerrion Ealy have been linked together since coming to Ole Miss and this season is no different.

Whether because both are dual-sport athletes, balancing between football in the fall and baseball in the spring, or both are playmakers on the field, the Oak Grove and Jackson Prep standouts are never far apart in any conversation.

As fall camp begins and the 2021 season slowly creeps closer, the two offensive stars are learning a new position together at the slot. It was heavily discussed and publicized during the summer and offseason that Plumlee could see himself in a new role come August. That was proven true as he is officially a wide receiver — despite being listed as a quarterback on the roster.

Plumlee worked all of Monday’s practice with the receiving corps, taking many reps with the starters and catching passes from quarterback Matt Corral, who took Plumlee’s spot as the Rebels starting quarterback last season.

The transition has been a smooth one thus far, according to head coach Lane Kiffin, who touched on Plumlee’s shift from the quarterback room to the receiver’s room following Monday’s practice.

“The focus is John playing receiver, because I don’t think he could get really good at that while doing both, having never done it before,” Kiffin said.  “He’s basically (at receiver) full time right now early in camp, seeing how he can develop from there. It’s really the only fair thing to do to him. If you go back and forth, it’s just too hard at this level to get really good at it.”

Entering their second season together, Kiffin and offensive coordinator Jeff Lebby are working to expand their playbook and offensive scheme. With that comes using Ealy in different roles beyond simply a running back. One of those expanded roles includes working out of the slot.

In the first two days of camp, Ealy said he had not worked too much in the slot, taking only a handful of snaps out wide.

One thing that is helping Ealy is having the ability to lean on Plumlee, who he admitted is ahead in adapting to the new position due to using his quarterback skills in knowing how the routes and where to be.

“It’s great to have (Plumlee). He’s a great person,” Ealy said. “If you know John Rhys, if you’re on the same team or even in the same room you’re blessed. Having him, he can teach me some things. He can teach me the position. It’s nice having him. He’s (further along). He played quarterback, so he kind of already (knew the position). He just had to move there.”