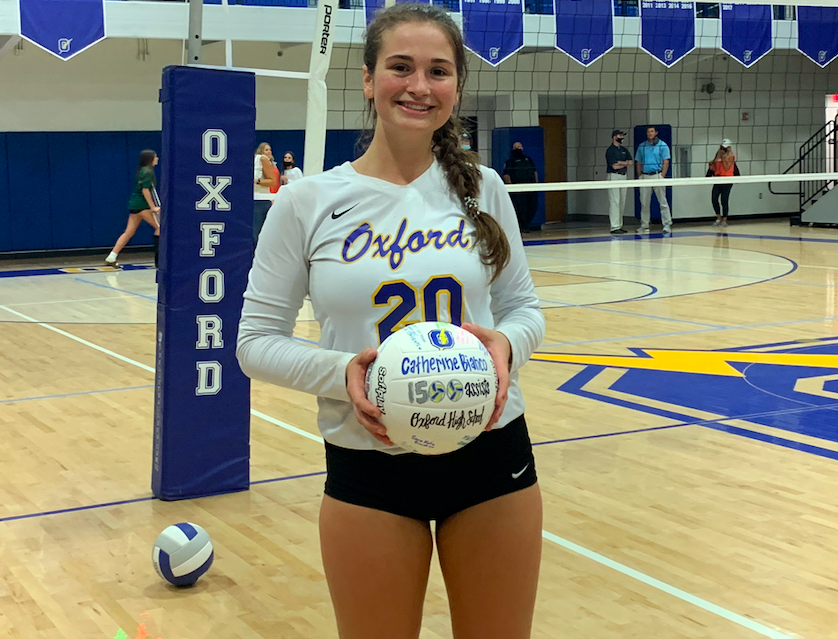 Catherine Bianco has been a pivotal piece of Oxford volleyball’s success on the court and on Thursday she solidified her place in program history.

The milestone accomplishment might have have been unbeknownst to Bianco, but it was not lost on her teammates and fans in attendance as the Oxford High School gym erupted after she notched the career tally.

“I was very much in shock because no one told me and I had no idea,” Bianco said. “It means a lot to mean just because I have really good teammates who just make getting 1,500 assists obviously very easy with a good defense and the hitters that I have.”

Bianco’s individual success is just a microcosm of the overall success the Chargers (3-0) have had in the very early stages of the season. After missing the first few matches due to a COVID issue in the program, Oxford has picked up wins over Lewisburg, DeSoto Central and Lake Cormorant.

Knocking off the defending Class 6A champions in the Jaguars as well as the Gators, the Chargers are feeling a wave of confidence as region play is around the corner. The string of success is something head coach Ashley Martin, who is in her second year, attributes to what her team is doing off the court.

“We’re talking about what it means to be a team and they’re really buying in to what it means,” Martin said. “They’re really sticking together through adversity and changes. …I think that we’re doing all the right things that we’re supposed to be doing right now. On the way home (from DeSoto Central) the film wasn’t even posted yet and the girls were passing around the iPad looking at what they did wrong after sweeping DeSoto Central.”

Another potential key to the Chargers early success is the continuity and stability within the program. There were not any seniors on last year’s team, meaning every player has returned for 2021.

Having her entire roster return has helped Martin establish a culture and a rhythm to the program that the Chargers are believing in.

Oxford begins Region 3-6A play on Tuesday when they host Starkville at 6 p.m.