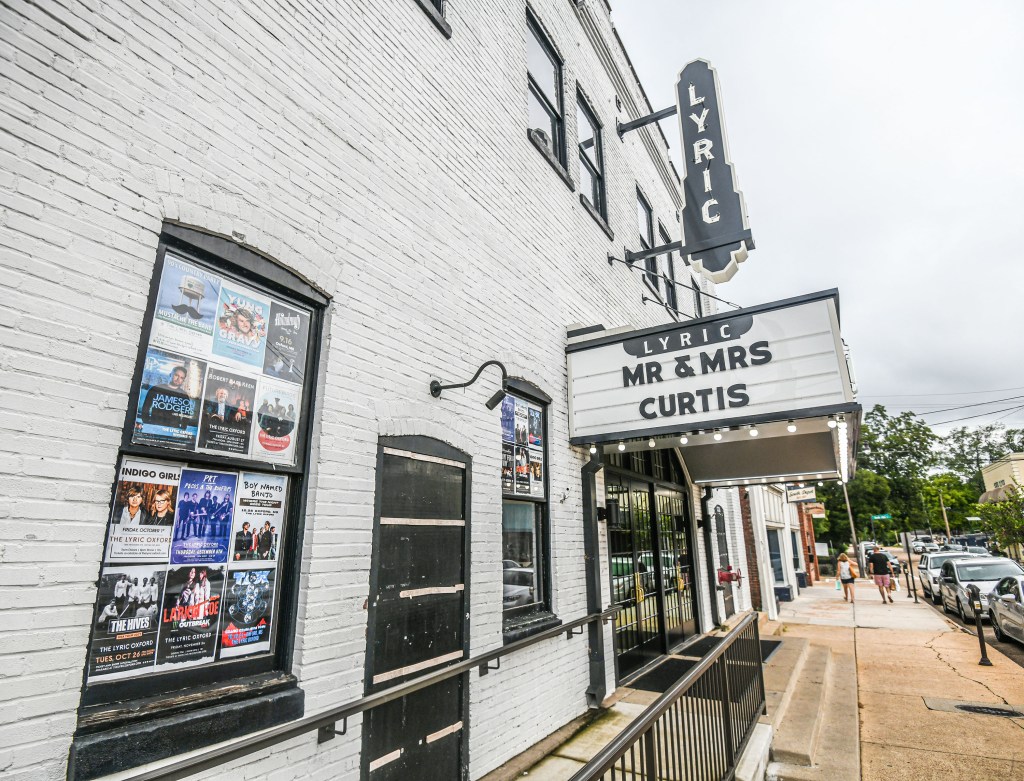 Flyers in the windows of The Lyric promote upcoming shows on Friday. Earlier this week the music venue announced that “in order to prevent further cancellation of concerts due to Covid-19 and for the health of our staff, patrons, artists, crew members, and community, we will now require proof of vaccination or a negative test for entrance to all ticketed concerts”. (©Bruce Newman)

Sports arenas and concert venues around the country are beginning to implement requirements for entry due to the latest surge of COVID-19 cases and two locations in Oxford are following suit.

The Lyric and Proud Larry’s announced this week they would begin requiring proof of being fully vaccinated or to show proof of a negative COVID-19 test for all their ticketed events.

While both venues made the decision to move forward with these requirements, Lyric general manager Lindsay Dillon-Maginnis told the EAGLE that it was more of a case of when, not if, they would make the call.

“This has kind of been the trend for most festivals, Live Nation, AEG,” Maginnis said. “Promoters who have been in our line of work, we could see the storm coming. It was more when are we going to announce it to the public rather than, ‘Do we have to do this?’ You could see the writing in the tea leaves.”

Requiring vaccinations is a controversial topic across the country in the political arena as well as the entertainment industry. Venues that have announced similar requirements have seen ticket holders request refunds for shows they were planning to attend in the wake of those announcements.

According to Maginnis, they have had “less than one percent” of ticket holders for scheduled events this fall request a refund. Most other feedback has been positive, though some negative feedback has been received.

“It’s been an overwhelmingly large majority of support. I will say that,” Maginnis said. “I think what people see online or what you see in comments is vitriolic or negative. But with those people, if you dig deeper, have no connection to the Lyric or Oxford or even Mississippi. They seem to be people, I hate to use the word trolling, who are not ticket holders. Their names don’t pop up in our database and seem they’re just trying to fight the anti-vaccine, the mask policy across the board.”

The Lyric currently has shows booked from Aug. 26 through Dec. 9. In the venue’s announcement there was not a set timeline for when they might remove the COVID-19 requirements for entry to shows, but Maginnis said they would reevaluate things on Nov. 1.

All but three of the Lyric’s 16 booked shows for the fall, including the sold out Black Keys show on Sept. 23, will require proof of vaccination or a negative test to attend.

“This wasn’t our plan in July, or June. I can’t even say that it was in the beginning of August,” Maginnis said. “As the Delta Variant has gotten worse and Mississippi has gotten more and more cases, we’re going to reevaluate our policy on Nov. 1 to see if the case count has gone down and where do we stand. If it looks like we may have a better control (over the COVID cases) then we may go back to just normal entry the way that we did before COVID.

Thursday’s show featuring The Futurebirds will be the Lyric’s first in-person concert in nearly 18 months after shutting down March of last year.