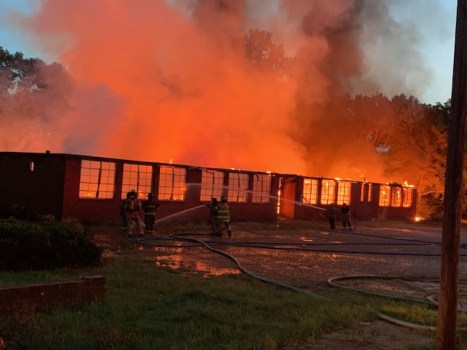 Davidson School was built and founded by Ezra C. Davidson, the principal and founder of Davidson schools, served as a school for African American children during segregation until it closed in 1970. (Photo: Calvin Hawkins | Yalobusha County)

On Tuesday, August 17, a fire destroyed most of the former Davidson School building on Calhoun Street in Water Valley.

“It really hurt me to see that burning like I did,” said Hawkins.

The school, which was an African American school, closed down in the years after integration. The building, located at 403 Calhoun Street, has sat empty since then and was reportedly scheduled to undergo a restoration project.

The church next to the building did not receive significant damage from the fire.

Water Valley Fire Department Chief Mark McGovak said the lab has not reported back to him, but from his assessment the cause of the fire was not arson or electrical but due to a lightning strike.

“We did have a lightning strike in Water Valley at 5:15 that evening and all the signs point to something that started on the roof,” said McGovak. “I don’t believe there was any foul play.”

“I grew up on the same street all my life for the last 44 years,” said Hawkins. “I drive by that building every day going to my parent’s house just down the street. It was really a monument that cannot be replaced. All that I have left is pictures and memories.”

According to Hawkins, the building was originally built by Ezra C. Davidson, the principal and founder of Davidson schools, in 1955. The building served as Davidson Colored School until it closed in 1970 and reopened Water Valley Elementary School where 3rd and 4th grade students were taught.

One of the former teachers at Davidson, Dolly Henderson was hired on to be one of the last principals at Water Valley Elementary by Joseph Ford, a former principal at Davidson, according to Hawkins. Henderson lived close to the school as well.

Everdale Baptist later relocated and the building continued to change hands until Charlie Dyers bought the land and planned to renovate the building.

“The building had been utilized for weddings, funerals, birthday parties – just as a night community center for the African American community,” said Hawkins. “A lot of strong history has taken place at that school. The whole community hates to see it burn.”

The Eagle has attempted to contact Dyers but there has been no response.