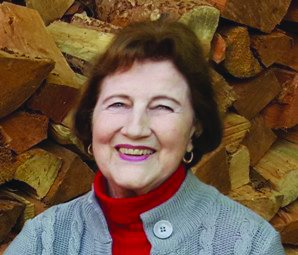 Elaine Hoffman Scott passed away on Thursday, July 29, 2021 in Little Rock, Arkansas–a place she loved and served with a tireless passion for education and the arts, and a place where she formed a web of mutually sustaining personal connections.
She was born in Greensboro, North Carolina to Mark and Elaine Hoffman on December 7, 1936. She spent her formative years in Oxford, Mississippi and then earned her Bachelor’s Degree in English at Wellesley College in 1957. She married Isaac Alexander Scott Jr. the following summer. After working as a middle school teacher in Springdale, Arkansas, she returned to Oxford to earn a Master’s Degree in English from the University of Mississippi. She then settled in Little Rock and lived for more than 50 years in the Hillcrest neighborhood in the house with the beautiful Ginkgo tree. Most recently, she made her home at Chenal Pines in West Little Rock where she joined other active seniors in a newly founded book club, afternoon yoga, Sunday matinees, and drumming classes.

Her enthusiasms for Little Rock and the broader state were many. Perhaps her most satisfying endeavor was serving on the State Board of Education from 1985 through 1997. During this time, she remembered waking up each day and thinking, “Today we could do something good for the children of Arkansas.”

In her early years in Little Rock, she taught in the English Department at the University of Arkansas at Little Rock, coordinated the Friends of the Library volunteers, distributed books to school children as part of Reading is Fundamental, served on the Chamber Music Board, and contributed to a number of additional clubs, organizations, and political causes. In later years, she served on the University of Arkansas Medical Sciences Institutional Review Board and was president of the board of Life Quest (2014-15). Throughout her years in Little Rock, she was a member of Edelweiss, read numerous novels with the Fourth Thursday Bookclub, and participated in a large number of local organizations and clubs, all of which brought her joy and are too numerous to mention here.

She was preceded in death by Isaac Alexander Scott Jr. in 2009. She is survived by her three children Melissa Scott, Caitlin Scott, and Bran Scott, as well as Caitlin’s husband Edward Derby, Bran’s wife Elane O’Rourke and daughter Elisabeth Scott. She is also survived by her brother Mark Hoffman and his wife Mary Jo Hoffman and by Isaac’s sister Sherwin Ghaphery.
A memorial service will be held at 4:00 p.m., Saturday, August 28, 2020 at Ruebel Funeral Home, 6313 West Markham St., Little Rock, Arkansas 72205. Face masks will be required. The service will virtually be broadcast live to Ruebel Funeral Home’s Facebook at 4:00 p.m., Saturday, August 28, 2020.

In lieu of flowers, donations may be made to the Friends of the Central Arkansas Library System, 100 Rock Street, Little Rock, AR 72201 (online at www.cals.org), or the Mark and Elaine Hoffman Memorial Music Scholarship Fund, The University of Mississippi Foundation, 406 University Avenue, Oxford, MS 38655 (www.umfoundation.com/main/make-a-gift/).