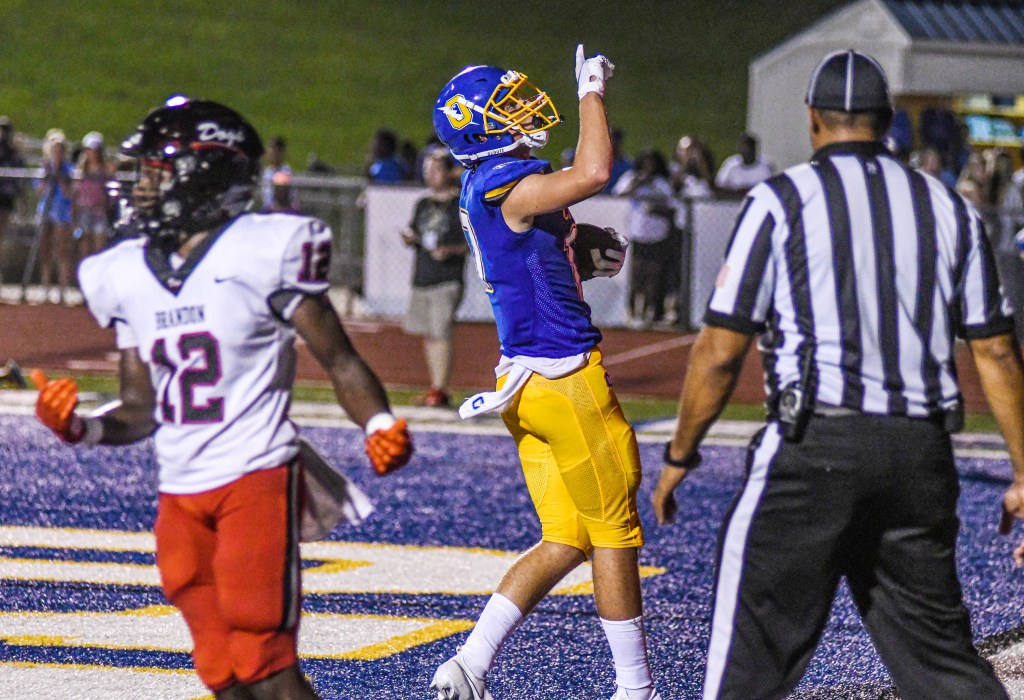 Oxford’s Jack Harper (17) reacts after making a touchdown catch in the final minute of the first half against Brandon’s Jevon Durr (12) at Bobby Holcomb Field in Oxford, Miss. on Friday, August 27, 2021. (©Bruce Newman)

The journey to a third straight state championship game started on Friday for the two-time reigning and defending Class 6A North champions, and it was a good harbinger of what the rest of the season could be.

Oxford once again proved they are the kings of the comeback, rallying from 14 points down to defeat Brandon 24-17 in battle of 6A contenders.

The Chargers (1-0) scored 24 unanswered points, but struggled on offense early with Brandon’s defense able to stifle and disrupt most of the first half. Things began to click during their final possession of the half when quarterback Michael Harvey found tight end Jack Harper for a 1-yard touchdown pass to cut the Bulldogs’ lead in half at the time.

Late in the third quarter, Harvey found Dane Harmon for a 40-yard touchdown pass to tie the game at 14-all. They took the lead for the first time with a field goal by William Wilkinson to convert on a Brandon mistake after the Bulldogs muffed the snap on a punt attempt.

Running back Omar Howell got in on the scoring with a two-yard touchdown reception off a pass from quarterback Trip Maxwell.

Brandon (0-1) managed to find points from both its offense and defense. The Bulldogs scored the first points of the game when quarterback Landon Varnes connected with Malcolm Harvey for a 12-yard touchdown pass to take a 7-0 lead early in the second quarter.

The Bulldogs doubled their lead about five minutes later, with a scoop-and-score by the defense after causing a Harvey fumble deep in Oxford’s territory.

Oxford’s defense clamped down in the second half, holding the Bulldogs to only a field goal in the fourth quarter for the final margin.

“Defensively, I thought we played really, really well,” Cutcliffe said. “We gave up some yardage at some different times but we were able to get some big stops … I thought we tackled a little better in the second half. Brandon has two really good (running backs) that run in there and do some things to make it tough on you. I thought we settled in and played better the second half.”

Oxford is off next week after losing their game at South Panola due to the Tigers having to quarantine due to a COVID-19 outbreak. They return to the field on Sept. 11 against John Curtis Christian in Shreveport, La.