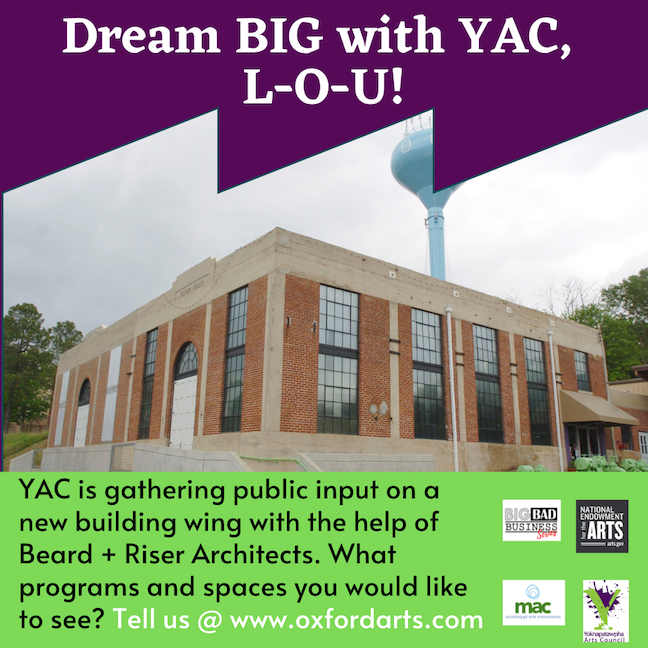 The Yoknapatawpha Arts Council has received funding through the National Endowment for the Arts to gather public input on a new building wing and is partnered with Beard + Risers Architects to see this vision come to life.

The wing will be dedicated to the humanities, which includes languages and literatures, the arts, history, religion and philosophy. Although the ideas are limited in humanities, the NEA has given YAC a wide path to work with, according to YAC Executive Director Wayne Andrews.

YAC recognizes that Oxford has a diverse and creative community that deserves to have its voice heard and they encourage everyone, especially up and coming entrepreneurs, to give their input on the new wing in a survey.

Beard + Riser’s principal architect Dale Riser has created a survey for adults and children to get input on what they think the community needs g.

“We have learned that children believe what Oxford and Lafayette County needs is a place to hold cat parties and a rooftop swimming pool,” said Andrews. “It’s my understanding that cats and water don’t mix but I’m down with the swimming pool.”

Riser has conducted research for projects across the south, including Mississippi and Louisiana, and has a great expertise on the sense of community and what tools the public needs.

The new wing can potentially serve as a studio space, a creative space or start-up space just to name a few.

“This is the chance to say, ‘We need this,” said Andrews. “Here we have this community building and what kind of spaces, tools and resources need to be in it to be effective?

Additionally, YAC has a goal to raise $3 million in five years and they have already achieved half of that goal in one year. The council is taking donations from the public and are approaching foundations for funding.

“We’ve got this,” said Andrews. “The only thing we don’t have? [The public’s] opinion. You know that saying: your opinion doesn’t count. Well, this is the time it does. It is not going to be Wayne’s space, because if it is: cat party and rooftop pool.”

For more information about the Yoknapatawpha Arts Council, the listening session and how to donate, visit www.oxfordarts.com.