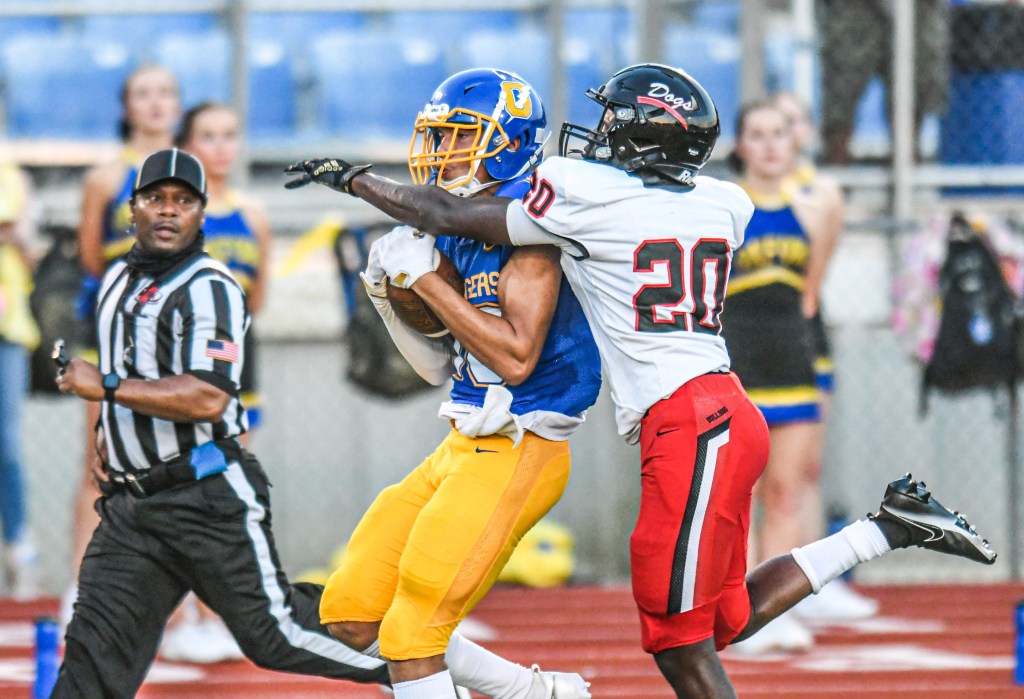 Oxford’s Ashten Shorter (16) makes a catch against Brandon’s Manny Didia (20) at Bobby Holcomb Field in Oxford, Miss. on Friday. The Chargers were ranked No. 2 in the state in the first Associated Press prep poll released on Tuesday. (©Bruce Newman)

Oxford and Oak Grove have been inseparable the last two seasons, both on the field and off, when it comes to the discussion of who is the king of Class 6A.

The discussion continues as the first Associated Press Mississippi prep poll was released on Tuesday, putting the Chargers and the Warriors atop the standings once again.

Oak Grove (1-0), the defending 6A state champion, is ranked No. 1 overall in the first poll of the season while Oxford (1-0) comes in at No. 2 overall. The Warriors received six first place votes while the Chargers received one. Madison Central, West Point, Ocean Springs, West Jones, Greenville Christian, South Panola, Clinton and Louisville round out the top 10. Clinton and Louisville were tied at No. 9.

In the Class 6A poll, the Warriors were the unanimous No. 1 team, receiving all seven first-place votes and the Chargers were ranked No. 2. Madison Central, Ocean Springs and South Panola rounded out the top five.

The Commodores were ranked No. 5 in the Class 5A rankings behind West Point, West Jones, Picayune and Neshoba Central.

Oxford finds themselves with an unexpected by this week due to South Panola losing their first two games of the season because of a COVID-19 outbreak within the program. Lafayette travels to Horn Lake while Water Valley hosts Senatobia in the Blue Devils home opener on Friday.