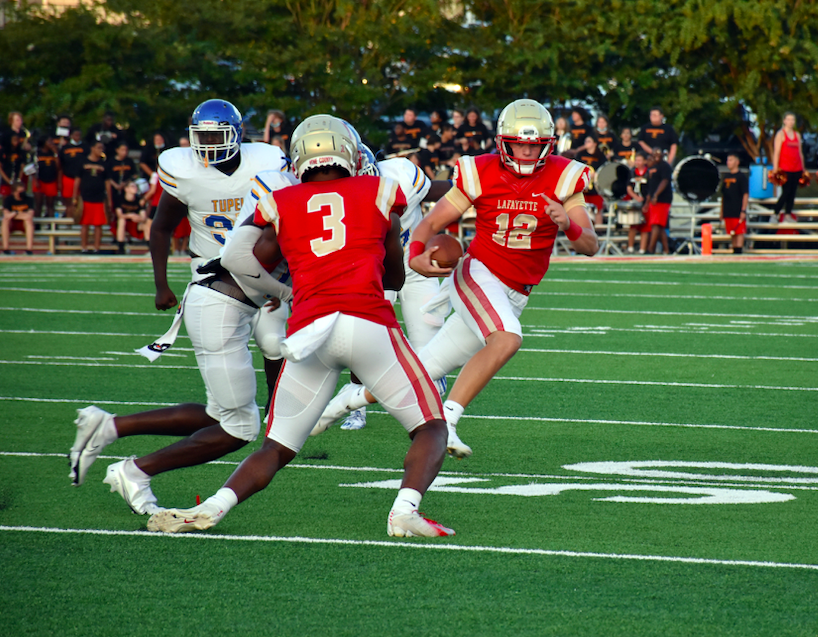 Lafayette quarterback Will Dabney (12) runs during their game against Tupelo at William L. Buford Stadium on Friday. The Commodores travel to Horn Lake this week. (Jared Redding)

As the calendar turns to September the second week of the high school football season arrives on Friday.

The opening week provided exciting matchups between Oxford and Brandon while Lafayette and Tupelo put on a defensive clinic, scoring a total eight points combined. Water Valley got their season off on a resounding right foot with a shutout win at Independence.

As week two rolls in, the Commodores and Blue Devils continue preparations for their next opponent while the Chargers have an unexpected week off and more time to prepare for their trip to Shreveport, La. on Sept. 11.

South Panola is still under COVID-19 protocols, causing them to forfeit their first two games of the season, including this week against the Chargers. Due to inability to find a replacement game and the new rule put in place by the Mississippi High School Activities Association this season, Oxford accepts the forfeit and improves to 2-0 on the season without playing a game this week.

The start of the 2021 campaign could not have gone any better for Water Valley.

The Blue Devils went up to Independence and shut out the Wildcats 34-0 for a statement road win in their season opener. Now, Water Valley (1-0) returns back to Bobby Clark Field for their home opener against a former region opponent in Senatobia.

Due to COVID-19 issues with North Ponotoc and then weather issues, causing New Albany’s field to be unplayable, The Blue Devils (1-0) did not have a jamboree to serve a tune up. Not having those two quarters to allow his players to experience a preseason warm up before last week’s game caused Water Valley head coach Brad Embry some trepidation, though that quickly went away as the game progressed.

“(I was) nervous,” Embry said. “You don’t know what to expect and your guys, some of them have played a lot of football and others haven’t. As a coach, it puts you kind of in an uneasy state of mind. Some of the things we thought would happen did happen. Normal, early season mistakes. But again, I was proud of our guys.”

The past two seasons, Water Valley and Senatobia were Region 2-3A opponents but that has drastically changed this year. Senatobia went back up to Class 4A after realignment while the Blue Devils shifted up to Region 1-3A.

The Warriors are coming to Water Valley after dropping their season opener in a 20-6 loss to DeSoto Central last week.