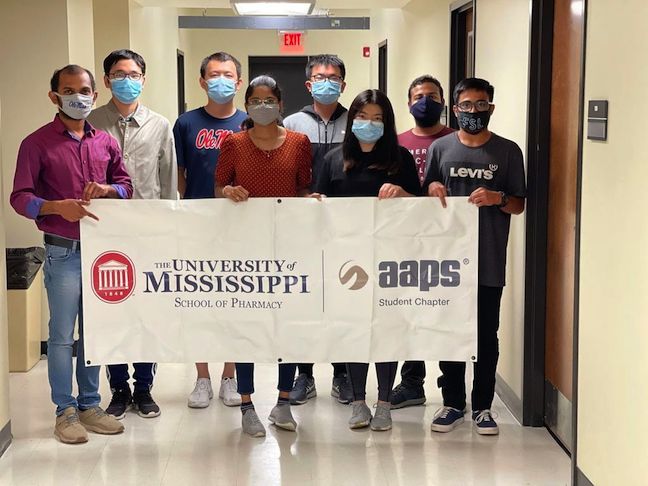 The University of Mississippi chapter of the American Association of Pharmaceutical Scientists has been selected as a recipient of the 2021 Student Chapter Award by the national organization.

The award is given to chapters that demonstrate exceptional commitment to service and outreach. Up to three chapters nationwide are selected for the award each year.

This is the first time the university’s chapter has received the award. A plaque honoring the achievement will be presented to the group at the annual AAPS PharmSci 360 meeting in October. The chapter also will receive $1,000 to support future activities.

Abhishek Shettar, treasurer of the chapter and a graduate student in the Department of Pharmaceutics and Drug Delivery, said the award is a tremendous honor and a reflection of the successful work the chapter has done over the past year.

“It feels great to be part of this organization, which is also part of the profession,” Shettar­ said. “It feels special that the student chapter has won this award during our tenure as the executive committee.”

The chapter has been active over the past year, even as COVID-19 limited participation. It hosted events such as a hands-on coating workshop in conjunction with the School of Engineering, as well as another session co-hosted with the Graduate Writing Center to assist fellow graduate students.

Community service was a focus as well. The chapter joined with the School of Pharmacy’s Academy of Managed Care Pharmacy and International Society for Pharmacoeconomics and Outcomes Research student chapters to support the Doors of Hope campaign, providing assistance to homeless and at-risk families in the Oxford area.

Those efforts were previously recognized by AAPS in January when the chapter was featured in the organization’s monthly Student Chapter Focus newsletter.

Michael Repka, chair and distinguished professor of pharmaceutics and drug delivery and director of the Pii Center for Pharmaceutical Technology, praised the work of the chapter in bringing home this award.

“Over the last several years, I have seen the energy that students in our department have injected into the AAPS student chapter,” Repka said. “It was exciting to see all students working as a team to add value to the organization.”

Shettar hopes that the award will serve as inspiration for future graduate students in the field, and that it will help strengthen the chapter.

“This award will definitely inspire the incoming graduate students to work hard and think of more innovative ideas to help grow the chapter along with their individual growth,” Shettar said.