Matt Corral “expecting the unexpected” from Louisville in opener 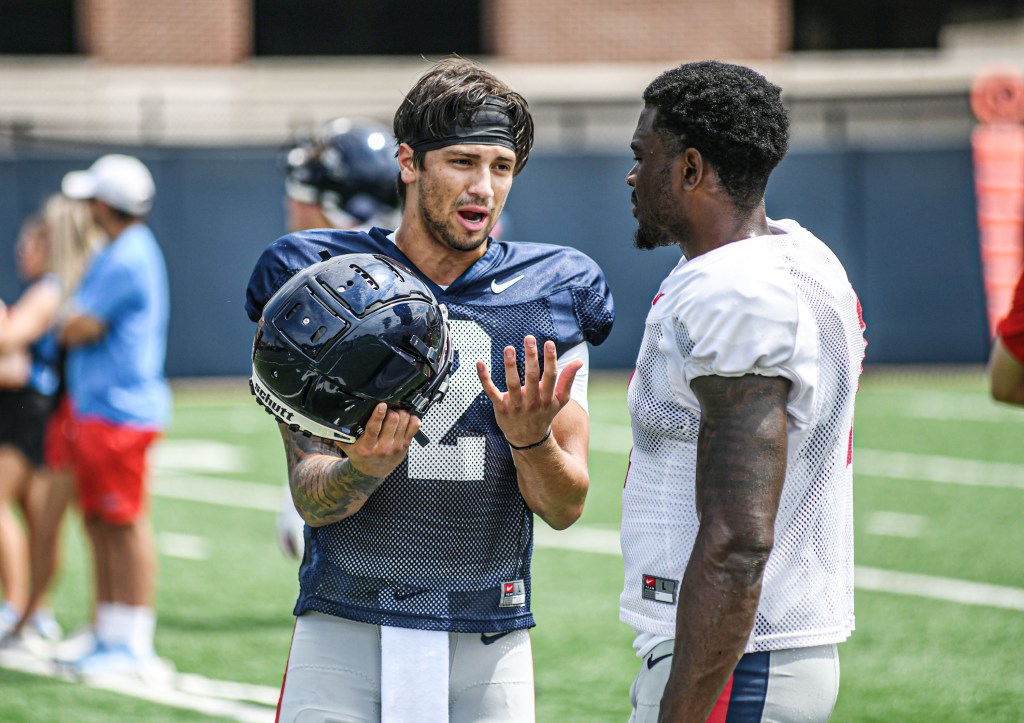 The weeks of preparation and talking are over for Ole Miss as they prepare to travel to Atlanta this weekend to kickoff the 2021 season.

The Rebels will play Louisville at the Mercedes-Benz Stadium on Monday in the second Chick-Fil-A Kickoff game (7 p.m. CT, ESPN) of the weekend. No. 1 Alabama plays No. 14 Miami on Saturday in the other game.

For Matt Corral, it begins a season that could be a banner year with plenty of hype about the top returning quarterback in the Southeastern Conference. Talk of him becoming a dark horse in the Heisman Trophy race is growing, including Robert Griffin III picking Corral as his favorite to hoist the trophy come December.

With all the outside talk on sports stations, websites and social media pages, Corral took a preemptive strike to block all the noise out, deleting his social media accounts earlier this week. Corral isn’t completely unfazed when some of the conversation leaks into the meeting rooms, but is also keeping the blinders on.

“I just don’t look at it,” Corral said. “I deleted my social media (on Wednesday night)…Instagram and Twitter. I’ll probably be on it here and there, but I don’t think it’s something that I’m going to be looking at. Like, I didn’t even see (Robert Griffin III’s prediction) until I was in an interview with the sports announcers and they told me that. That’s pretty awesome.”

Corral is also getting some help in keeping grounded this season.

“I don’t really try to focus on it. Coaches don’t even talk about it. They talk about how much I suck. It’s all good,” Corral said in jest.

When it comes to the on the field preparations, Corral is not oblivious to the fact defenses will mimic what worked against the Rebel offense last season, specially in the Arkansas and LSU games. The strategy of dropping eight players back and leaving three on the defensive line is something Corral anticipates seeing on Monday.

All during the summer and offseason, Corral has acknowledged his errors and mistakes in those games a year ago and admitted the fault fell purely on his shoulders. Improving those cracks in his armor was a main priority this offseason.

“I’m expecting (Louisville) to drop eight,” Corral said. “Obviously, nothing’s going to surprise me. Because I’m expecting the unexpected. … Basically what Arkansas did.”

Keeping Corral healthy is a key and pivotal piece to a potentially very successful season for Ole Miss. Kiffin has expressed his desire to not see Corral rely on his legs in games.

For Corral, he knows having to run out of the pocket or if an opening in front of him emerges, he needs to take advantage of those moments. Though, he also acknowledges the game could dictate when those moments are necessary.

“It’s all about situation,” Corral said. “(Offensive coordinator Jeff Lebby) knows I’m going to be smart. He trusts me. But if he sees me being aggressive and taking an unnecessary hit, he’s going to say something. The key is to take less hits than I did last year, just get out of the way when I need to. Understanding the situation. If it’s fourth-and-one and we need it, I’m going to take that hit and get that extra yard…I’m going to be passive, depending on the situation, I guess.”