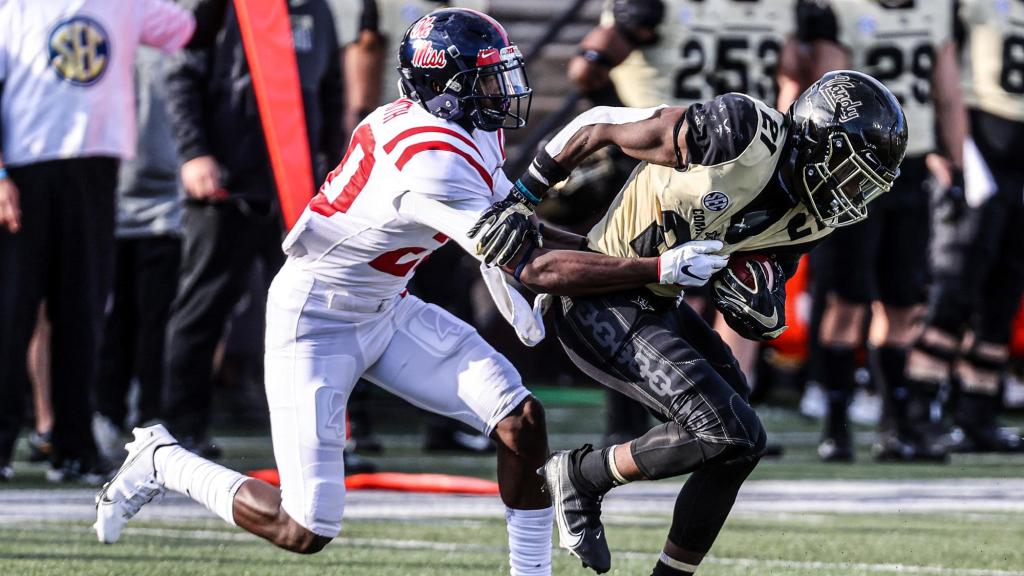 Ole Miss senior defensive back Keidron Smith has been named the winner of the 2021 Chucky Mullins Courage Award, as announced during a special team meeting on Saturday.

The award, sponsored by Phi Beta Sigma fraternity, honors the late Chucky Mullins, who had his Ole Miss career come to an end during the 1989 Homecoming game against Vanderbilt when he was paralyzed after making a tackle. After returning to his studies at Ole Miss, Mullins passed away May 6, 1991.

A native of West Palm Beach, Fla., Smith becomes the 31st recipient in the 32-year history of the award, which is presented annually to an Ole Miss upperclassman defensive player that embodies the spirit of Mullins – courage, leadership, perseverance and determination.

“This is a huge honor to win this award,” Smith said. “It’s just a blessing to know that my coaches and teammates thought I was the right guy for this. To be able to be linked with the Chucky Mullins Award for the rest of my life is truly special. I’m going to go out there and do my best to keep up his legacy.”

On a defense loaded with veterans, Rebel head coach Lane Kiffin said his staff identified several worthy candidates but agreed Smith would be a great representative of Mullins’ legacy and the award.

“Keidron has provided tremendous leadership and dedication for our program,” Kiffin said. “His willingness to embrace any role necessary to help the team is remarkable, and we are excited to recognize him with this distinguished honor.”

A change from recent seasons, Smith will wear a 38 patch on his No. 20 jersey rather than switch numbers. A patch was also worn by the award winner from 2006 through 2010.

“In discussing the award with potential candidates, it was clear that many of them have personal connections with their own jersey number,” Kiffin said. “While we have the highest respect for Chucky’s No. 38, we also understand what these players’ numbers can mean to them and their families, and we didn’t want a deserving candidate to sacrifice that in order to receive this great honor. After discussions with former players close to Chucky and the award, we decided to give the winner the option to wear either the number or the patch.

“Chucky’s legacy will always have tremendous meaning to our program and everyone in the Ole Miss family, and we hope this decision will help ensure that the award winner each year is the player that most embodies the spirit of Chucky.”

Smith has appeared in every game for the Rebels since arriving on campus in 2018, including 22 starts. The two-year starter is the Rebels’ top returning tackler from last season with 64 total tackles. He finished second on the team in 2020 in pass breakups.

Smith has finished with 47 or more tackles all three years while roaming the Ole Miss defensive backfield. He leads all active Rebels with 21 passes defended.