RUNNING ‘DORES: Lafayette bounces back with rout of Horn Lake 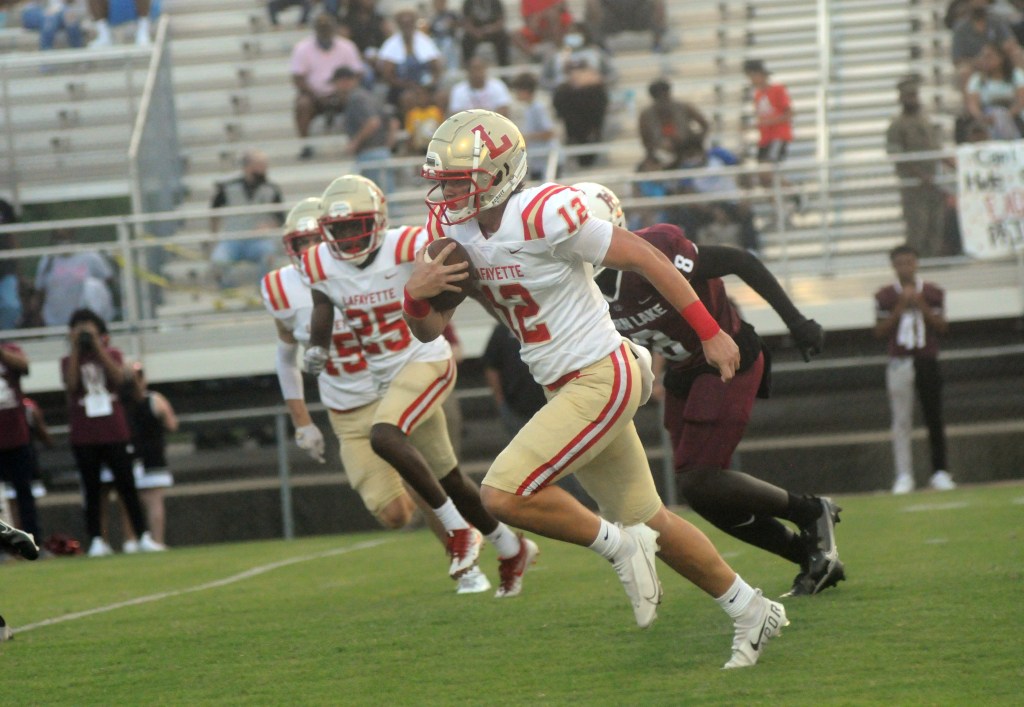 Lafayette quarterback Will Dabney (12) runs for a touchdown in the first quarter of their game against Horn Lake on Friday at Horn Lake High School. The Commodores won 38-7. (Jake Thompson/Oxford Eagle)

HORN LAKE — Lafayette struggled to find points last week against Tupelo and it gave them a “sour taste” in their mouth, according to head coach Michael Fair.

The Commodores washed that taste out quickly, struck fast and early to defeat Horn Lake 38-7 at Horn Lake High School. It was the first win of the season, and first road victory,  for Lafayette. With the help of a short field on their first three possessions, the Commodores (1-1) scored on two of them.

On their first play on offense, quarterback Will Dabney called his own number and found the endzone on a 38-yard run. Two possessions later, Jay Reed scored on a one-yard run with the aid of a couple offsides calls on Horn Lake inside their five yard-line.

Reed scored his second off of a nine-yard run. The scoring drive was set up via an interception by Jeremiah Tanner. Reed’s third touchdown of the first half was off of an 11-yard run.

“We all know we left some plays on the field last week and (Dabney) knows it more than anybody,” Fair said. “For him to come out and play at a real high level was important. He needs to enjoy this because he’s worked hard to get to this point. He’s got a skillset that’s fun to watch.”

Running back Dee Gipson also scored in the second quarter with a five-yard run. Lafayette only started inside their territory once in the first half.

“(Gipson) is one of those guys that’s been showing out at practice and making plays,” Fair said. “We’ve got a few little injuries … he kind of had an opportunity to do some things in practice and really did well and showed all the rest of the guys, ‘Hey, this is how you make the team. This is how you get plays on Friday night.”

The only thing that got in Lafayette’s way on Friday were themselves. The Commodores were flagged for 50 yards worth of penalties, with 40 of them in the first half. Most were pre-snap penalties for false starts on offense and offsides on defense.

“We still had way too many pre-snap stuff that we’ve got to clean up, but our effort’s not something we got to fix. We play really hard tonight,” Fair said. “We kind of pride ourselves on playing a clean football game and tonight we made some mistakes there and we’ve got a lot to clean up.”

Lafayette’s defense continued to be stifling this week. They recovered three Horn Lake (0-2) fumbles with two of them resulting in touchdowns.

Linebacker Mario Wilbourn was not available for the, as he was not dressed out. Despite not having their senior leader on the field, the Commodore defense did not miss a step, creating havoc in the Eagles backfield all night.

“What good teams do is they kind of pick up for the one that’s not out there and I thought they did that tonight,” Fair said. “Our defensive front is good and we’ve said that since day one. I think they’re starting to get their own identity over there and it’s fun to watch.”

Lafayette returns home to William L. Buford Stadium for a two-game homestand, starting next week when they host another Class 6A opponent in Southaven.