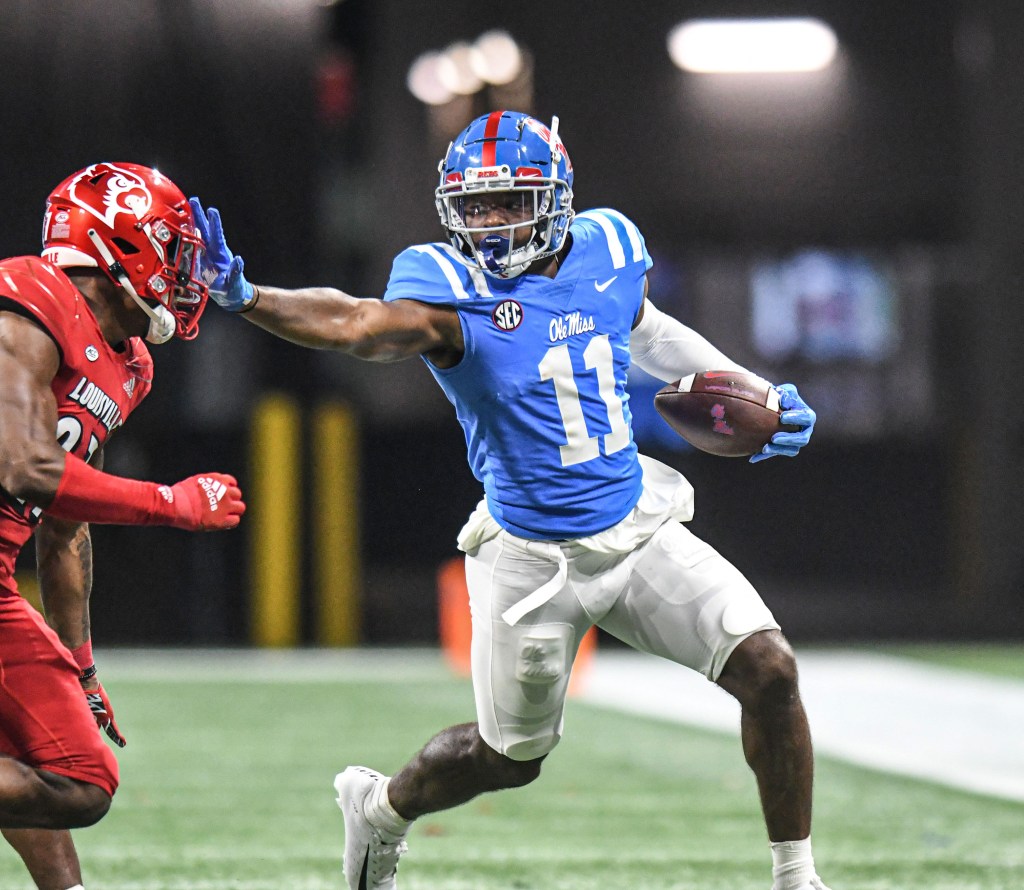 ATLANTA —  The Ole Miss offense performed as expected, minus a couple setbacks, while the defense showed potential improvement had been made in its season opener on Monday.

They did all this without Lane Kiffin even in the state of Georgia.

The Rebels defeated Louisville 43-24 in the Chick-Fil-A Kickoff Game at Mercedes-Benz Stadium, kicking off what could be a promising 2021 campaign.

Questions lingered on both sides of the ball for the Rebels entering the season and some of those might have been answered in Atlanta.  The biggest question on offense all offseason and fall camp was who would be the receiver, or receivers, to step up and fill the void left by Elijah Moore.

Senior Dontario Drummond appeared ready to take the next step and become Matt Corral’s prime target. The Laurel native hauled in a game-high nine catches for 177 yards and a touchdown. The next best was running-back turned part-time slot receiver Jerrion Ealy’s 52 yards on three catches.

“He’s smart,” Corral said of Drummond.  “He’s working the tight end spot. He’s working in the slot and that does a lot for us. We can use him and go in fast tempo and get him wherever we want him because he can go out there and execute.”

The running game from a season ago was still intact for Ole Miss (1-0) and show deep the running back room is. Snoop Connor, who was listed fourth on the depth chart behind Ealy, Henry Parrish, Jr. and Kentrell Bullock, proved he could easily be the Rebels key runner.

Corral got his season off to a near perfect start, completing 22-of-32 passes for 381 yards, one touchdown and a rating of 179.1. He also rushed for 68 yards and a touchdown on 12 carries.

“I think (Connor) is setting a great example for our team,” Corral said. “When those depth charts came out he was fourth on the depth chart. He’s fourth on the depth chart right now, and not a word came out of him. That guy was doing extra. He was in the film room. He was getting his footwork right. Getting the protection right. That guy was doing everything right and that’s a definition. That’s a winner. We need more of him on our team. ”

The defense had questions aplenty entering this season after being one of the worst in the country last year. While the bar might have been low to clear, the Rebel defense high jumped over it with their first performance in 2021.

The Cardinals (0-1) were held to 107 total yards in the 26 of them through the air from quarterback Malik Cunningham. Louisville’s passing yard total was the lowest allowed by an Ole Miss defense in a first half since the Rebels played Wofford five years ago.

Linebacker transfer Chance Campbell had his first debut as a Rebel and provided plenty for fans to get excited about. The former Maryland player finished with seven tackles, with three of those coming on Louisville’s first possession. Otis Reese, AJ Finley, Tysheem Johnson and Ashanti Cistrunk all finished with a team-high eight tackles.

“It felt good going into halftime with a shutout but coming out of halftime, we came out a little flat,” Finley said. “We have to take that out of our game to be an even better defense than we were today. ”

The defense’s success was without linebackers Lakia Henry and Mark Robinson who were both ejected in the first half for targeting.

Ole Miss has a short week, hosting Austin Peay on Saturday for their home opener. Kickoff is set for 6:30 p.m. CT and will air on ESPN+