GRINDING IT OUT: Lafayette survives tussle with Southaven for 12-8 victory 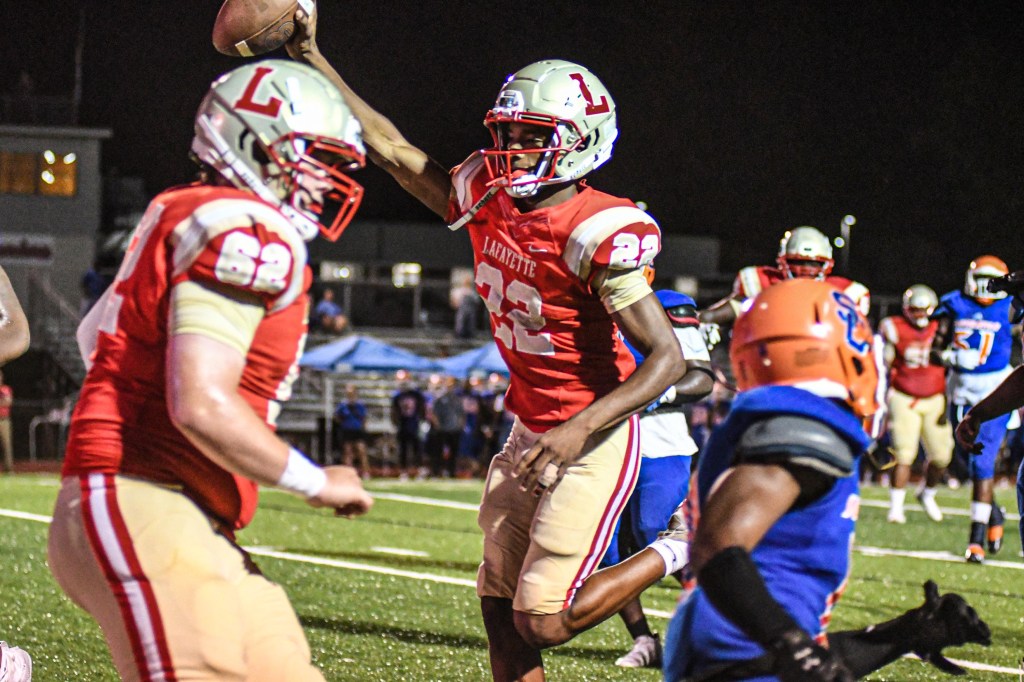 For the first 15 minutes of Friday’s contest at William L. Buford Stadium, very little went right for the Lafayette Commodores. However, they didn’t point fingers, played the next play and found a way in the end.

The Commodore defense turned in another dominant outing and delivered late to secure a 12-8 victory over Southaven. Through the first three weeks of the season, Lafayette’s defense has surrendered just a single touchdown.

“I can make up words for those guys,” LHS head coach Michael Fair said. “They’re really really good. I love their effort, their intensity. With a defense like this, as hard as they play, we’re always going to be in the game even when things don’t go great. Boy, we had some miscues tonight, but to have a defense like this you can lean on is really special.”

Southaven presented a matchup problem up front early defensively, but the big plays eventually came. Jay Reed finished with 88 yards on 26 carries while quarterback Will Dabney finished with 75 yards on 12 attempts. Scores were tough to come by, but Makyi Reed-Jones and Trikyus Woodall were able to find the end zone. Woodall’s touchdown came on a pass from the head coach’s son, Charlie Fair after an early injury from Dabney.

“It’s something we’ve been doing in the yard since he’s been old enough to walk. It’s pretty special to see him do it in a game,” Michael Fair said.

Before that, things were looking bleak for the Commodores. After forcing a three-and-out, the Lafayette punt returner watched as Southaven’s punt rolled down to his team’s own one yard line. The Chargers took advantage of that mistake and blew up the backfield for the game’s first points, a safety. Southaven had the early 2-0 lead with 8:46 left in the opening quarter.

Southaven took the ensuing kickoff all the way down to Lafayette’s red zone, but penalties and negative plays later resulted in a turnover on downs. On Lafayette’s next offensive possession, Dabney immediately threw an interception to Southaven’s Jamari Davis, who took the ball 15 yards the other way for a pick six. Just like that, the Chargers held a 8-0 lead with 3:53 left in the first quarter, following a failed two-point conversion.

Following a few failed offensive drives on both sides, Dabney led the Dores deep into Charger territory midway through the second quarter. However, Dabney got swung down to the turf hard, resulting in him leaving the field and his backup, Charlie Fair entering the game.

Fair delivered a clutch screen pass to Jay Reed on 4th-and-7 and later threw his first varsity touchdown pass to Trikyus Woodall from nine yards out. Following a failed PAT, Southaven’s lead was trimmed down to 8-6, 5:23 remaining in the first half.

Lafayette carried that momentum into the locker room with the score remaining the same. Despite early struggles, Lafayette held a slim 78-56 margin in the yards category. Things started on the wrong foot yet again for Lafayette coming out of the locker room. A backwards throw by Dabney was ruled as such with Southaven recovering the loose ball in Commodore territory. The defensive side of the ball again bailed Lafayette out of another situation for force yet another punt on the ensuing drive.

Late in the third quarter, Lafayette engineered their best drive of the night. A 48 yard run by Dabney set up Makyi Reed-Jones with a 27 yard touchdown run and Lafayette’s first lead of the night. The two-point conversion following the score failed, but the Commodores had a 12-8 lead with 1:35 left in the third quarter. The Commodores were later given golden opportunities throughout the fourth quarter with a Burgess forced fumble and Woodall interception, but the Chargers stood their ground.

With 7:18 left to play, Southaven moved quickly down field by going up tempo and later found themselves knocking on Lafayette’s door. The Commodore front stood for three plays, but on 4th-and-3, a pass interference call gave the Chargers another chance under five minutes to play.

The defense delivered once more, forcing an incompletion and a turnover on downs with 4:43 to go. Reed proceeded milked the clock while a late fumble recovery put the game on ice. At the end of the night, Lafayette’s defense gave up just 126 total yards.

Next Friday, the Commodores close out non-region play by hosting the 50th annual Crosstown Classic against Oxford. Kickoff is set for 7 p.m. at William L. Buford Stadium.

“We can fall into the trap of making this week all about Oxford, but if we don’t make this about us right now, we’re messing up. We have so much to fix. If we do that and prepare, we’re a tough team to beat,” Michael Fair said.