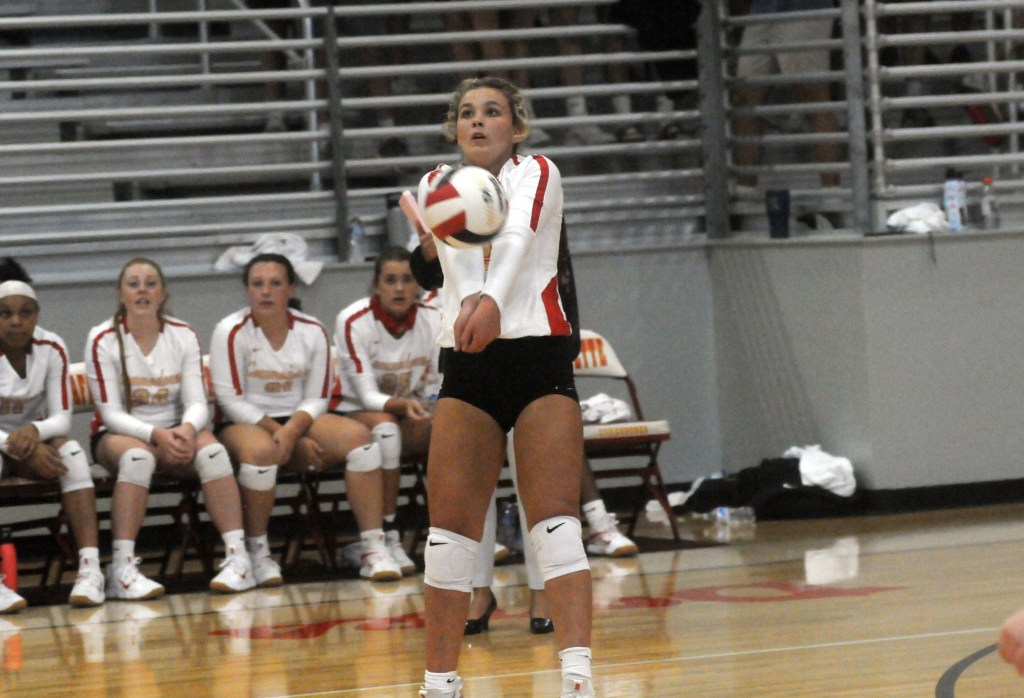 Lafayette’s Caroline Crockett receives a return during their match against Lake Cormorant at the Lafayette High School gym on Thursday. The Commodores won 3-2. (Jake Thompson/Oxford Eagle)

Lake Cormorant has had Lafayette’s number on the volleyball court for quite some time, but on Thursday the Commodores exacted some revenge in a pivotal region match.

The opening set was back and forth but the Commodores were unable to get past Lake Cormorant’s line of defense at the net with the Gators seemingly blocking every attack thrown at them. It allowed for Lake Cormorant to take the early 1-0 edge and caused the Commodores to have to adjust and regroup.

“I’m just proud of the fight,” said Lafayette head coach Zoe Storck. “I’ve told them defense wins championships and we’ve been working really hard at that. … I think that shows the growth that we’ve made at adapting to the teams that we’re playing. We saw some things from them in the first set, we made some changes in the second and third set.”

The Commodores managed to keep composure and were able to quickly grab a 2-1 lead by winning the second and third sets.

With a chance to only drop one set in their first two region matches, Lafayette was not able to put the Gators away as Lake Cormorant edged out a 25-23 win in Set 4 to force the deciding fifth set.

Keeping true to the rest of the match, the final set was as competitive as the previous four. Trailing by as many as three points late, the Commodores rallied to pull out the victory.

“Definitely very high-spirited (in the lockerroom after),” Storck said. “These are the games that we work towards. These are the big division games that we want to win and we’ve been working hard in the gym every single day to make sure that when we’re in tough divisions games like this that we’re able to come out on top.”

Chloé Carr led the Commodores with 27 digs to go with two aces while Caroline Crockett recorded 16 assists and 11 digs. Kailey Gooch finished the match with 14 kills, 10 digs and three blocks.

Lafayette returns to action on Saturday, traveling to Tupelo to participate in the Volleyfest tournament.