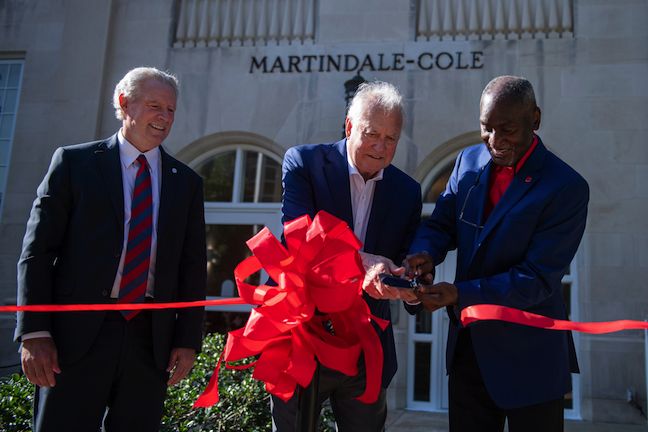 A wave of applause and celebration washed over a crowd of hundreds Friday (Sept. 10) morning as Don Cole and Larry Martindale cut the ribbon in front of the newly named Martindale-Cole Student Services Center at the University of Mississippi.

Cole’s iconic laugh could be heard over the crowd as he and Martindale gripped each other’s hands and shared the moment.

Staff members clapped as they leaned out of the building’s second- and third-floor windows to join the chorus of cheers, shouts and whistles. Many raised their hands, some cried. A shout of “Come on, Cole,” punctuated Cole’s opening remarks.

“You can feel it in the air,” he said. “You can see it in your surroundings. You can sense it in your presence. Something historic is happening here today at the University of Mississippi.

“It’s almost divine and I am so pleased so many of you all decided to be a part of this historic event.”

The lawn, sidewalks and flower beds between the Martindale-Cole Student Services Center and the J.D. Williams Library were packed with faculty, students, administrators, staff, and longtime friends and colleagues of Cole, including James Meredith and Chancellor Emeritus Robert Khayat.

A Lifetime of Student Advocacy

As a student, Cole was one of the 89 Black students who were arrested and jailed for staging a protest during a 1970 campus performance by Up With People. Most of the arrested students were taken to the local Lafayette County Jail, but Cole and several others were taken to the state’s most infamous prison, the Mississippi State Penitentiary, commonly known as Parchman Farm.

“No one would have blamed Don if he never returned to our campus again, but he had unfinished business, ladies and gentlemen,” said Chancellor Glenn Boyce. “What followed was an amazing 25-year career at the university, where he served as a mathematics  professor, program director, grant writer, assistant to the chancellor for multicultural affairs, chair of several university committees and a trusted mentor to legions of students.

“While Don retired in January 2019, his legacy is seen, heard and felt all across this institution each and every day because of the care that he modeled and embodied to help each student reach their full potential during their time at Ole Miss. So, how fitting is it that his name now adorns this very building where so many students go for support on our campus?

“I don’t think there could be a better place at the University of Mississippi to see Don Cole’s name than on a student services building.”

A Desire for Representation

Larry Martindale, the building’s first namesake, spent his career in hospitality focusing on making his guests feel welcomed and supported. It was his experience as a partner in the Ritz-Carlton hotel chain that led him to contribute to the reinvestment in campus beautification under then-Chancellor Khayat.

And the result of his and his wife Susan’s contributions, the student services building was named in his honor in 1995.

That same experience is what drove the Martindales to seek out another name to put on the building 25 years later.

Meredith, the first Black student to enroll at the university, sat in the front row during the renaming celebration. It was the statue of Meredith – less than 100 yards from the student services building – where Martindale was ultimately convicted to add the name of a Black student advocate to the building.

When Martindale saw a diverse group of families taking a campus tour, he followed along, and by the time the student leaders began explaining the history of James Meredith, Martindale’s mind was made up.

“We were honored, but after a while, Susan and I got to thinking, we really need to put that building to work, to help the university moving forward — to represent who it is today and tomorrow,” Martindale said.

“We talked to the administration and that’s when Don Cole’s name started popping up. We got to know him and Marsha (Cole) and now this building represents who Ole Miss is today, and tomorrow and for the future.”

A Charge for the Future

With the addition of Cole’s name to the building, Boyce said generations of students will be influenced by his example of leadership and advocacy.

“We’re so pleased that generations of current and future students will continue to have Dr. Cole’s example shaping their education,” he said. “This tribute ensures his journey will always be remembered, will always be on display and will always be celebrated by our university.”

To close the celebration, Cole issued a charge to the audience and, specifically, those working in the building to adopt the new Cole-Martindale Principle, which he said embraces inclusion, values diversity and demands equity.

“Larry Martindale, Don Cole, James Meredith, Robert Khayat and everybody else here charge the keeper of this center to apply that Cole-Martindale Principle to this building,” Cole said.

“We charge that the Cole-Martindale Principle will allow this center to give a collective voice to those many students who would otherwise have been silenced, not heard and not appreciated because of their stature.”