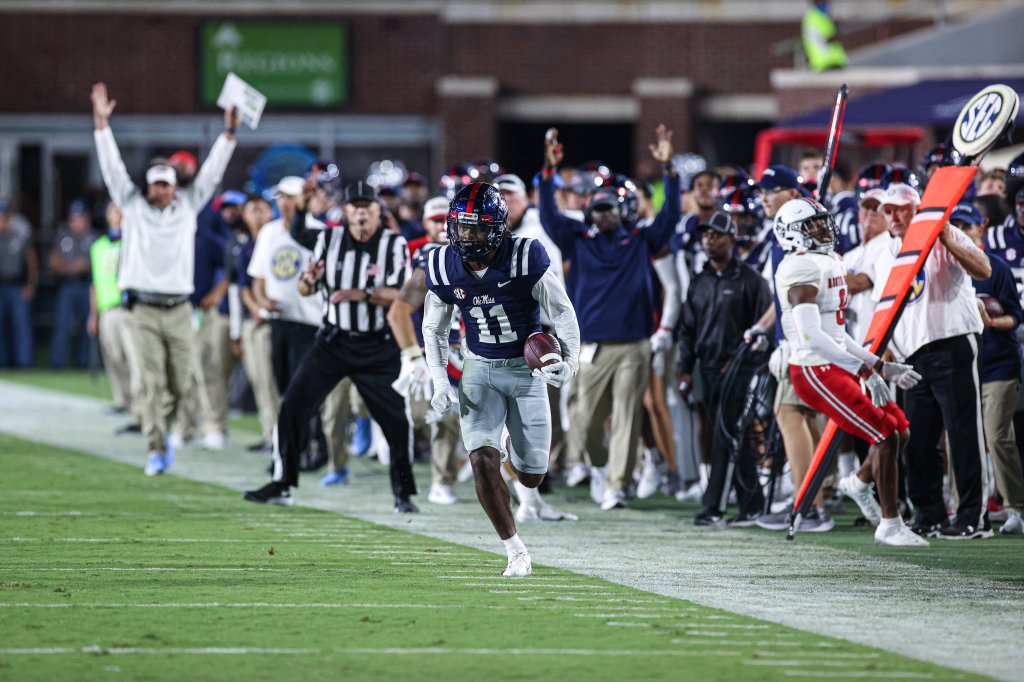 Ole Miss wide receiver Dontario Drummond runs down field after making a reception during their game against Austin Peay at Vaught-Hemingway Stadium on Saturday. The Rebels won 54-17. (Ole Miss Athletics)

The first two games of the 2021 season could not have gone any better for Ole Miss.

In their home opener on Saturday, the No. 20 Rebels trounced Austin Peay 54-17 at Vaught-Hemingway Stadium, five days after defeating Louisville in Atlanta.

Despite the short week that included only one true day of practice, Ole Miss (2-0) show no signs of fatigue. In fact, quarterback Matt Corral looked sharper on Saturday than the did against the Cardinals.

Corral threw for 281 yards and five touchdowns, completing 21 of 33 pass attempts to finish with a quarterback rating over 180.

After his breakout game against Louisville, wide receiver Dontario Drummond continued to be Corral’s go-to target on Saturday. The Corral-Drummond connection carved up the Governors defense for 107 yards and two touchdowns on six receptions.

While having a start then stop career so far at Ole Miss, Jonathan Mingo once against showed why he could become a key part of the Rebel offense. The Brandon native had seven catches for 99 yards and two touchdowns.

“(Mingo’s) played great,” said Ole Miss head coach Lane Kiffin. “You look even in the first game with the few catches how physical he looked.”

In the ground game, Henry Parrish, Jr. had eight carries for 72 yards while Snoop Connor had five carries for 23 yards and a touchdown.

The big question continues to be the play of the Rebel defense and if its performance against Louisville was a flash in the pan or a sign of progress.

Through two games the answer might be progress after the defense held Austin Peay (1-1) to 114 rushing yards, but did give up 260 passing yards.

Sam Williams helped the defense provide some offense in the first quarter. Williams strip-sacked Austin Peay quarterback Draylen Ellis and then recovered the fumble for a scoop-and-score.

“We’ve seen that from Sam all camp,” Kiffin said. “He came back from the summer just a different player. We struggle everyday with him, blocking him in practice. I was just hoping that would carry over in the game. We don’t do as many things, defensively, and I think it’s helping him.”

Ole Miss wraps up his short homestand next Saturday when they host Tulane (1-1) at 7 p.m. CT. The game will air on ESPN2.