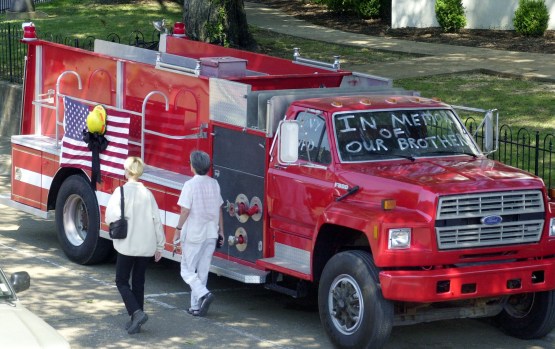 Women walk past a Lafayette County fire truck friday, September 14, 2001, that has been decorated to the memory of firefighters who have died or are missing as a result at the World Trade Center terrorist attackes earlier this week. The words "In memory of our brothers" has been written in sshoe polish on the windshield. The truck is parked on the Square in Oxford, Miss. (AP Photo/Oxford Eagle, Bruce Newman) 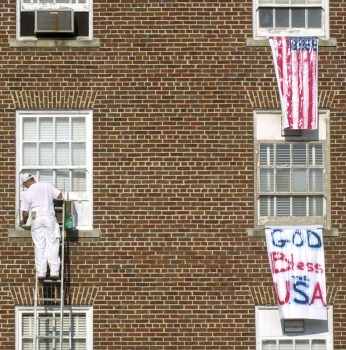 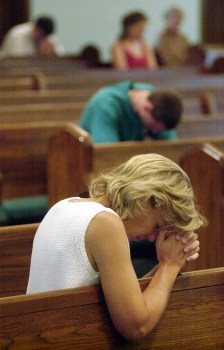 Luann Willis bows her head in prayer for victims of the terror attacks on the World Trade Center and Pentagon during a service at First Baptist Church in Oxford, Miss. Tuesday, September 11, 2001. About 50 persons attended the service. (AP Photo/Oxford Eagle, Bruce Newman) 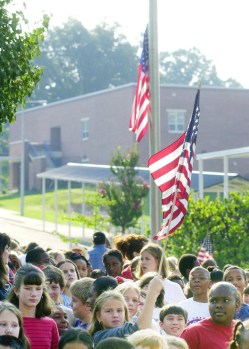 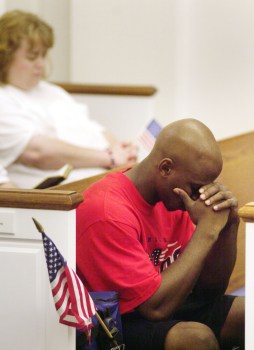 University of Mississippi student Alex Coleman of Marianna, Ark. bows his head in prayer at the Paris-Yates Chapel on campus shortly after midnight Friday, September 14, 2001. President Bush has declared today as a "National Day of Prayer and Remembrance." (AP Photo/Oxford Eagle, Bruce Newman)

When Sept. 11, 2001, began it was like any other Tuesday that came before it in the City of Oxford.

There was to be a special election to determine the next alderman for Ward 5, who ultimately was Preston Taylor who is still sitting on the board. A day earlier, the community had honored the late J.C. Goolsby, whose death occupied the front page of The Oxford Eagle.

Don Whitten was the sports editor at the Eagle in 2001 and was busy working on preparations for the paper’s coverage of the Ole MIss – Vanderbilt football game that Saturday.

“We had no Facebook. We had no Twitter,” Whitten said. “There was an internet and you could email and all of that, but this was back in the days to where news breaking like that came from the old wire machines went ‘ding ding ding.’”

Debbie Rossell, who was the news editor at the time, came into Whitten’s office around 8 a.m. and asked about the latest update on “the planes in New York.” That was brand new information to Whitten, who along with John Davis was unaware of anything transpiring in New York, or anything not involving Ole Miss playing Vanderbilt in football five days later.

The pair was quickly brought up to speed about the first plane striking one of the Twin Towers in New York.

It was then, the wire machine came to life to provide confirmation that the world had changed in an instant.

“It went ding ding ding and a little short thing came across and said ‘airliner hits Trade Center building. More news to follow,’” Whitten said. “About 30 seconds later it came out with another and they started coming regularly.”

There was not much to go on besides what was shown on television as the news was unfolding live in for everyone to witness. Whitten and the rest of the staff went into a holding pattern waiting to see what it was they, and the rest of the country, were witnessing.

Richard Howorth was the mayor of Oxford at the time and Whitten remembers one of the news reporters calling Howarth to ask if he knew any information. Howorth was not able to provide any updates as he was trying to get in touch with his wife, who was in Washington D.C. that morning.

Howorth eventually got a message from his wife a couple hours later.

From there, the plan shifted to trying to get in touch with anyone who might have a connection in New York City or in D.C. to get information to help localize what was becoming the worst terrorist attack on the country’s soil in history.

While the reporters were doing their best to provide any new information they could for the Eagle’s daily afternoon edition, across town students were sitting in classrooms watching everything unfold on television.

Chris Cutcliffe was a month into his freshman year at Oxford High School and remembers exactly where he was when the news of a plane hitting the towers started to trickle through the classrooms.

“I was in my second period class when we first heard the reports and our teacher turned on the news and we were just in disbelief and quiet,” Cutcliffe said. “I remember lots of parents checking students out. It was just kind of an eerie feeling throughout the day.

“I remember having serious conversations and people talking about a potential for a world war and the draft in the military again and all these kinds of things. I think there was just a lot of people afraid, to be honest, about what all this was going to mean.”

The Ole Miss game that Whitten and Davis were still focusing on writing about and previewing remained scheduled to be played that Saturday until 24 hours before kickoff. The Southeastern Conference ultimately decided to not play games that weekend, cancelling that Saturday’s slate of games on Friday.

Cutcliffe’s father, David, was the head coach of the Rebels at the time and he remembers his father having to navigate this national crisis as well as potentially still game plan for Vanderbilt who was still scheduled to arrive for most the week.

“For them it was very difficult because they did think they were going to play,” Cutcliffe said. “You have this tragedy that occurred, and you’re still trying to go practice football to prepare for the game as usual, but things were certainly not at all usual or normal that week. I think it was a very difficult week for everybody involved and I have to imagine, to some extent, it was a relief in that game getting postponed so you can kind of focus on maybe what mattered the most at that time.”

With most natural disasters such as hurricanes or other storms that cause people to flock to the grocery stores or the gas stations, the attacks on Sept. 11 were no different. There were some lines at gas stations in Oxford that Whitten recalls but nothing else major happened following that fateful Tuesday.

“When you had a big storm or hurricane or something, you’d localize it to a point,” Whitten said. “But, (9-11) was probably the biggest thing that we (covered).”