No. 17 Ole Miss preparing for “SEC opponent” in Tulane 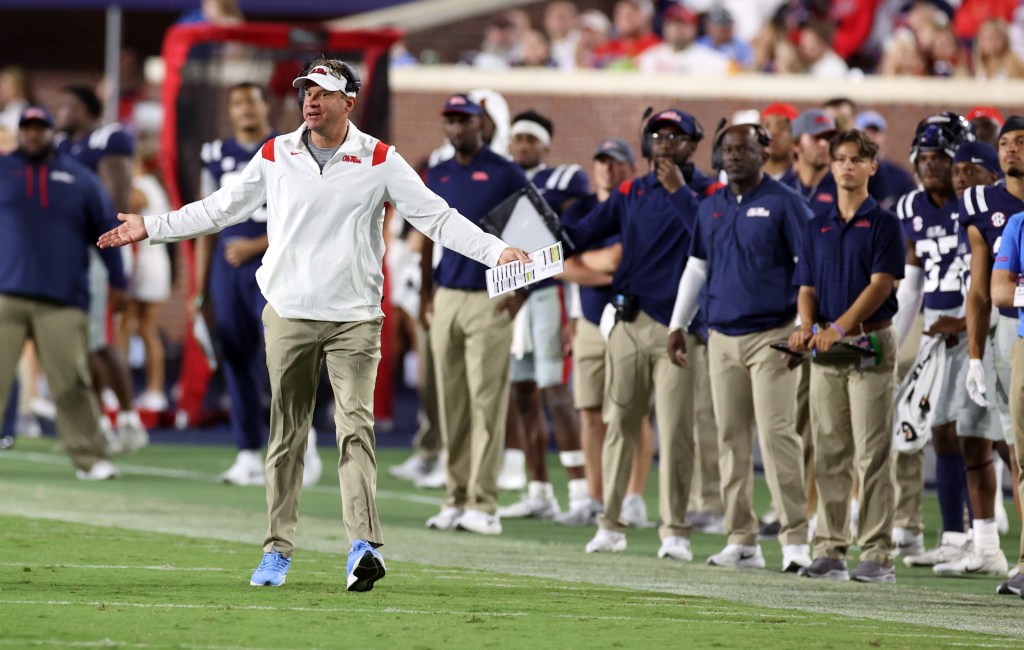 In a little over two weeks, No. 17 Ole Miss travels to Tuscaloosa for a highly anticipated rematch against No. 1 Alabama, but the Rebels cannot overlook the roadblock in front of them.

On Saturday, Tulane comes to Oxford and presents possibly the toughest challenge of the Rebels (2-0) first three games. The Green Wave nearly pulled the upset over Oklahoma in the opening weekend and then routed Morgan State on Saturday.

Second-year head coach Lane Kiffin did not mince words during his weekly press conference on Monday when giving his thoughts on Tulane (1-1).

“(Tulane) is a really good team, very talented, very well coached. And that’s not coach-speak. You can see it on film,” Kiffin said. “They go to Norman and go down to the last play of the game. Watching, they have really good players. Like a lot of times, these Alabama, Louisiana schools…there are a lot of players there in the state. They can’t all go to Alabama, Auburn or LSU, so we see them all over the place, really. They’re good-looking kids. I told my team today, ‘if you don’t know about conferences and just watch film and watch them play, this is an SEC opponent.’”

The Rebels are coming off the 54-17 win over Austin Peay last weekend and Kiffin offered high praise for their upcoming opponent. Tulane put up nearly 600 yards of offense on Morgan State with a balanced attack of 290 passing yards and 294 rushing yards.

Kiffin discussed the challenges the Green Wave offense can present to an opposing defense.

“They’re really multiple,” Kiffin said. “They’re well-coached and they cause issues. It looks like (Tulane head coach Willie Fritz) has done it at a number of places, but they can change from week-to-week when they look at what you’re doing. They cause problems, not just run plays like a lot of people do. They have a really good quarterback that can move. We have a lot of work to do.”

When it came to his team and providing more insight in how they performed against the Governors, Kiffin was not completely full of praise as he was when discussing Tulane.

Pro Football Focus graded the Rebels offensive line at 86.1, which was one of the top-three scores for an offensive line in the country on Saturday. This was mentioned to Kiffin, who scoffed at the grade and did not seem to validate PFF’s analysis.

“Pro Football Focus doesn’t know a whole lot about watching film,” Kiffin said.  “No disrespect, but we didn’t play real well up front. I know the numbers look good, but tell Pro Football Focus to realize we’re running against five-man boxes most of the time and they’re staying deep because there are three receivers. So, we’re supposed to be able to run into that. We got beat in pass protection in one-on-one matchups. The quarterback had to get rid of the ball early. I was not pleased with how we played up front”

That same offensive line was without starting center Orlando Umana, who sat out last weekend’s game due to what was described as an upper body injury. Umana started against Louisville in Atlanta five days earlier in the opener and practiced two days later before sitting out the Austin Peay game.

Kiffin noted Umana is expected back in the starting lineup for Saturday and was listed as the starter in this week’s depth chart released on Monday.

Ole Miss and Tulane are scheduled to kickoff at 7 p.m. CT on Saturday. The game will air on ESPN2.

Oxford and Lafayette team up with United Way for Crosstown Classic