Heard is perfecting the art of design and how to ‘Get Up!’ 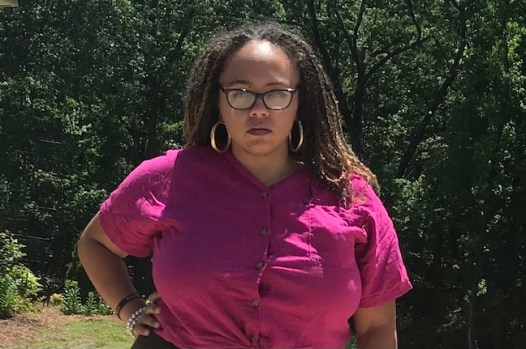 Timber Heard, owner and designer of Talitha Kumi Jewelry & Handbags, prides herself for her hand-stitched, beaded and crafted products. 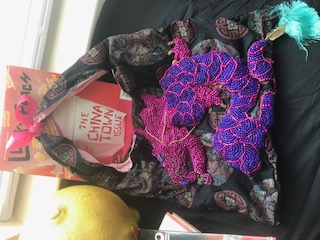 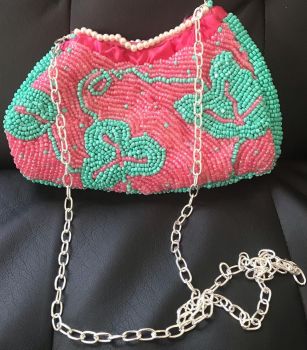 A hand-sewn and beaded handbag created by Timber Heard, the owner and designer of Talitha Kumi Jewelry & Handbags. 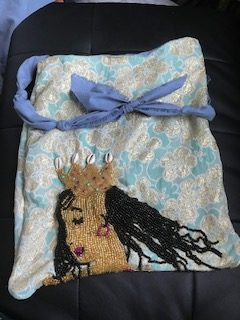 Timber Heard is no stranger to challenges, internal or external, but she does not let them stop her from putting her mind, heart and soul into her craft. The 31-year-old owner and designer of Talitha Kumi Jewelry & Handbags is setting her sights on becoming a handbag couturier and establishing her own atelier, a studio, in Oxford.

The brand takes its name from a passage in the Bible, Mark 5:41, where Jesus raises a little girl from the dead by saying to her, “Get up.”

Heard lives with schizoaffective disorder and is a big advocate for mental health and hopes to inspire others to “Get up,” because at one time she had to get herself up and push forward.

Born in Texas and adopted and raised in Mississippi, Heard learned to sew by hand from her adopted mother, a skill that was taught to the mother’s other children as well, and she carried that skill through the rest of her life.

“But I alone taught myself how to bead,” said Heard. As an anthropology major and self-proclaimed nerd, Heard has personally researched the significance of beading in Native American cultures and is interested in picking up different skill-sets from across the globe.

Heard pulls artistic influences from Nigerian, specifically Igbo, culture and their custom made designs that she experienced through Nigerian friends as well as French design houses.

During her stay with her adoptive family, a young Heard would watch E!News and catch fashion segments that would keep her attention for hours upon hours. The various fashions and designers inspired Heard and planted a seed for the future.

Later in life, when Heard was raised in foster care and began living in group homes, she relied on her sewing skills in her youth to keep her out of trouble and even make a small profit.

When the group home would make regular trips to Walmart, Heard would take the opportunity to buy more material to make her handbags.  She began selling her purses locally for $20 and would receive comments describing her products as so professionally and skillfully made, it was as if it came from a sewing machine.

Heard said her disorder allows her to use a great amount of focus to produce the level of detail and artistry she is known for and that anyone she trains will have to match her level.

Soon after graduating high school and gaining her associates degree, Heard moved to Oxford to attend the University of Mississippi where she experienced homelessness on and off for three years.

“It was the dead of winter and I was laying on a bench on the school campus,” Heard said. “The stars were out and pretty and I just said, ‘God are you real?’”

Homelessness coupled with the lack of adequate mental health services created a dark period in Heard’s life. She struggled with depression and suicide since the age of 10 and it got worse through college resulting in Heard making multiple attempts on her life.

After her final attempt, Heard realized that God was keeping her, so she sought out her purpose. Soon after she made some necessary life changes and reevaluations and then decided to make a living off of the skills she cultivated all her life.

Through the help of local entrepreneur and mentor Tammy Herod, Heard applied for The Big Bad Business Lab and was one of six to win the grant that would help her start her business. She also credits Herod, Yoknapatawpha Arts Council Executive Director Wayne Andrews and local entrepreneur Lee Ingram for helping launch her business.

Heard realized that God answers in his own way and it just takes time for blessings to come into realization.

Now, Heard designs handbags and jewelry pieces and creates custom orders for customers through her website, which she updates regularly with new, or restocked, items. Heard said she is blessed to be where she is now in life and in her business.

“Jesus did what he said he was going to do in my life and I want to help others get up as well,” said Heard.

Heard advises everyone who is going through their dark place or struggling with mental helath or suicide to keep faith and hold on.

“Don’t give up,” she said. “That’s what the enemy wants you to do and if you give up God can’t keep his hand on you. If you don’t do anything else today, just stay alive.”