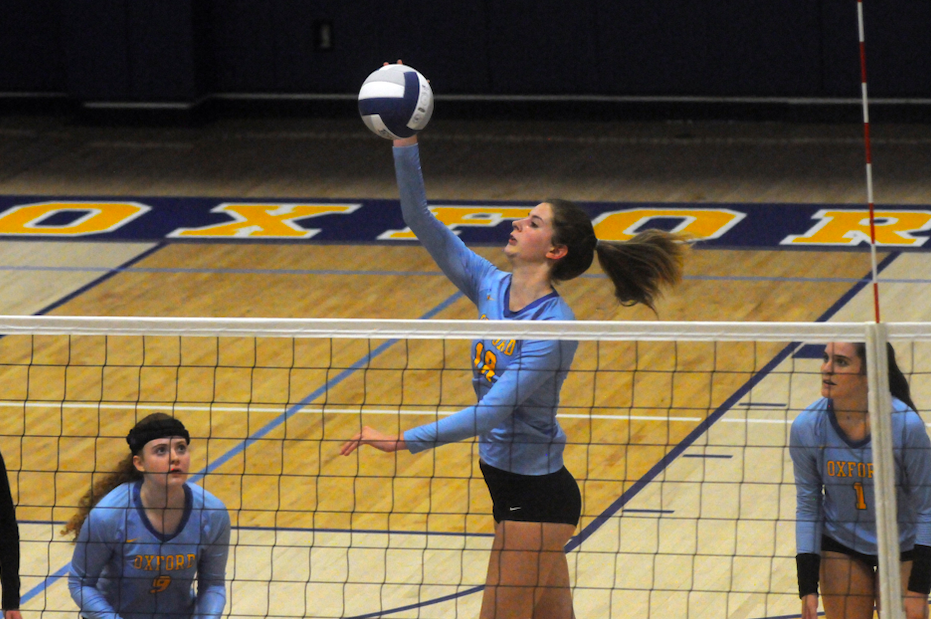 Oxford’s Torrey Tkach (18) attempts a kill during their match against Grenada at the Oxford High School gym on Thursday. The Chargers won 3-0 (25-5, 25-6, 25-3) to remain undefeated on the season. (Jake Thompson/Oxford Eagle)

The Oxford volleyball team’s perfect season stayed intact on Thursday and a playoff spot was clinched in the process.

As has become the theme for the Chargers this season they made quick work of yet another opponent, sweeping Grenada 3-0 (25-6, 25-5, 25-3) inside the Oxford High School Gym. With the win, Oxford (16-0, 4-0 Region 3-6A) secured a spot in next month’s Class 6A playoffs due to Grenada and Starkville already with three region losses.

Despite the success the Chargers are having, there are still things the team wants to fine tune. That was evident after their win at Lake Cormorant on Tuesday. While some teams might get lax midway through a season where they’ve yet to lose a match, the Chargers are finding ways to challenge themselves.

“After the Lake Cormorant game, several (players) texted me and said, ‘Hey, we have this we need to work on or, hey, we really have to focus on this. Hey, we really need to do this,'” said Oxford head coach Ashley Martin. “I think they’re trying to find something everyday to work on. We’ve been doing this thing where we’re writing goals down and everyday in practice: ‘What are your goals? What are you wanting to accomplish in practice? What are you wanting to do?’ I think that’s really helped.”

Thursday’s match did not present much of a threat or challenge to the Chargers, who rolled through each set with relative ease. The only time Grenada managed to get a point on the scoreboard was from a service error by the Chargers or a misplay of a ball.

Ainsley Tacke and Torrey Tkach led Oxford with six kills each while Brianna Lyons and Ava East each had four kills. Catherine Bianco recorded a team-high four digs to go with two kills and Lyons finished with three digs.

The playoffs begin in less than a month, but before the Chargers reach the postseason they have a checklist of items they want to improve on before the calendar turns to mid-October.

“There’s lots of things we’re working on and I think staying undefeated is probably one of them, but we’ve also talked about the possibility of what happens if we drop a game? What happens if we drop a set? How are we going to respond to that? What’s going to occur?” Martin said. “Being undefeated is great and wonderful, but what’s going to happen. How are we going handle that? Because that’s some adversity we haven’t been thrown (into) this season. So, those are some things that we’ve been talking about because they need to be talked about. They need to be addressed.”

Oxford is taking part in a two-day tournament co-hosted by DeSoto Central and Lewisburg, starting on Friday. The Chargers will play in five matches over the two days.