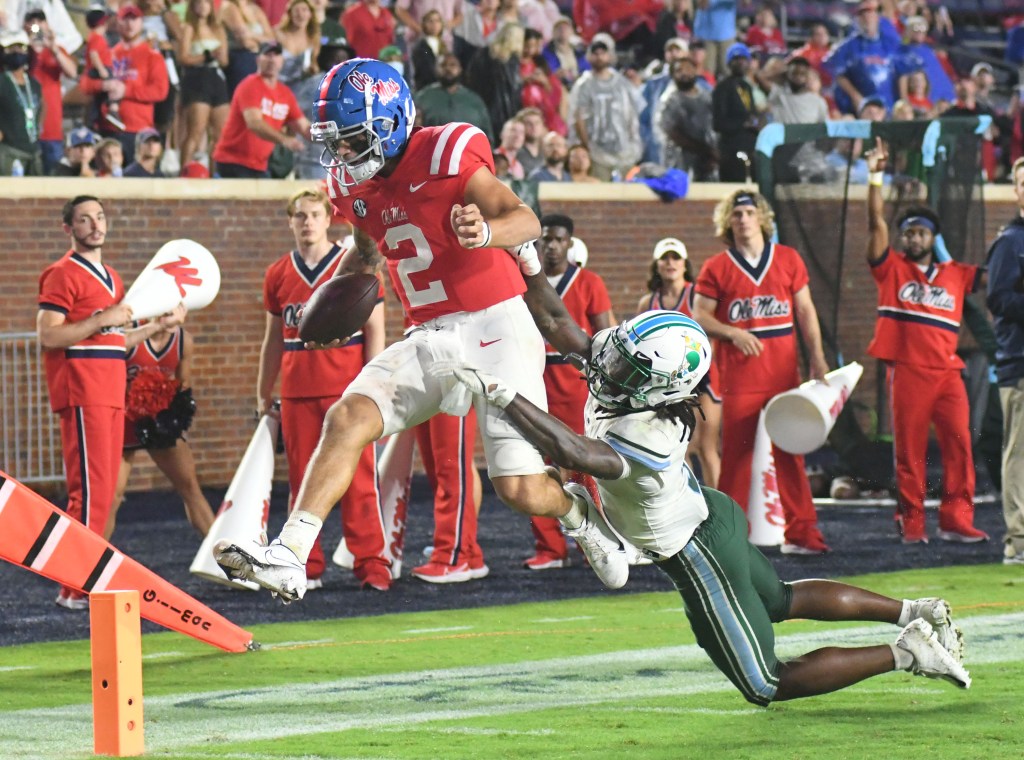 The Heisman campaign for Ole Miss quarterback Matt Corral might have been at a low volume through the first two weeks of the season, but on Saturday it was turned up to 11.

Corral put up video game numbers in the No. 17 Rebels 61-21 win over Tulane inside a rain-soaked Vaught-Hemingway Stadium. Despite the near two-hour lightning delay, Corral nearly took down a record that has stood since 1951 and held by a man named Showboat Boykin.

Responsible for a career-high seven touchdowns, Corral finished with 403 total yards of offense. The touchdown total tied Boykin’s mark set against Mississippi State. The junior also set a new mark as the first player to finish a game with at least three passing touchdowns and four rushing touchdowns in Southeastern Conference history.

Following his career night, all Corral could do was talk about all the things that did not go right for him on Saturday.

“I can name many mistakes that I made that game. It’s just you guys don’t see it because there’s plays being made,” Corral said. “There is bigger plays that could be made if I don’t make those mistakes. So, it’s just keep being focused on those little things. Every little detail matters and I think that’s what’s going to help us (into) next week.”

As for the rest of the offense, Ole Miss (3-0) finished with 707 total yards and nine touchdowns. Tulane (1-2) was not much of a threat on defense to the Rebels in the early going as the offense scored a touchdown on nine of their first 11 drives.  The 41 first downs was a new school record, breaking the previous record of 36 set against Chattanooga in 1971 and again against Memphis in 1980.

The Rebels had another balanced attack with 335 passing yards and 372 rushing yards.

Lost in all the Corral fireworks was the performance of running back Jerrion Ealy, who finished with 103 rushing yards on 15 carries. Henry Parrish, Jr. finished with 66 yards and a touchdown on nine carries while receiver Dontario Drummond had a rare rushing touchdown off an 11-yard run.

“For our guys to handle some adversity about starting warm-ups and stopping and all that and then to come out and play so well in the first half. … it’s pretty cool,” said Ole Miss head coach Lane Kiffin. “Proud of the guys. I wish we didn’t have the bye because we’re playing so well. But it is what is. We’ll just get better during that.”

Entering Saturday, Tulane’s potent offense was serving as possibly the first real test for the Rebel defense. The defense responded and continued to show signs of improvement, holding the Green Wave to 305 total yards off offense.

After scoring three touchdowns in the first half, the Rebel defense shutout Tulane the final two quarters.

“We did great on third down, which has not been the case since we’ve been here,” Kiffin said of his defense. “Played really well. Should’ve had another (interception) in our hands that would have stopped another touchdown drive. Still missed tackles in the back end.”

Ole Miss now enters its bye week and gets two weeks to prepare for their showdown in Tuscaloosa against No. 1 Alabama on Oct. 2. Kickoff time has not been announced yet.