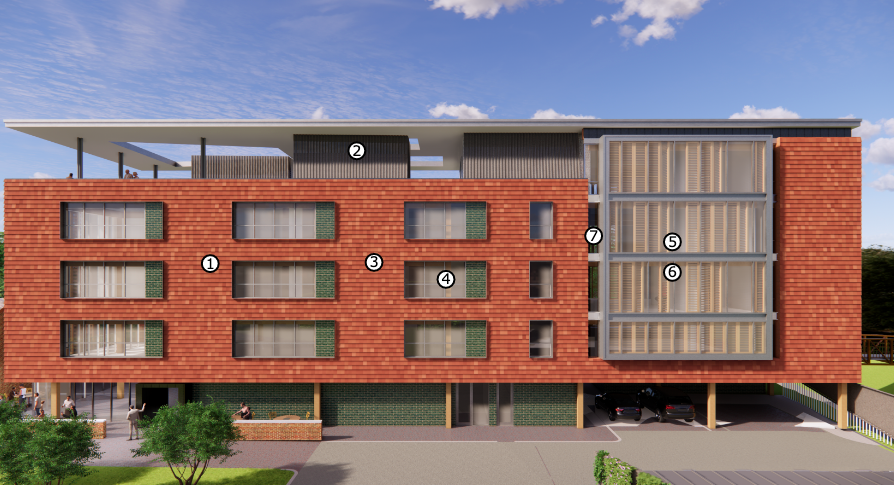 A rendering of the proposed five-story building that would have housed 10 residential units near the Old Depot Station. The Oxford Planning Commission denied two special exemption requests from the building's developer last week.

Two special exemptions were denied by the Oxford Planning Commission last week for a proposed new building along 100 Depot Street.

A five-story building was being planned by Roy Decker, who applied for the two special exemptions, which would include 10 residential units of six two-bedroom units and four three-bedroom units.

Decker applied for a special exemption from the step-back section and one from the Traditional Neighborhood Business zoning to have first-floor residential in a TNB – and two variances – structure height and parking.

The location presents a couple construction issues for the building, including North East Mississippi Electric Power Association’s high transmission powerline that bisects the middle of the property and includes a 50-foot easement that prohibits construction, reducing the useable space on the lot from 24,000-square-feet to 5,600-square feet.

The city’s planning staff recommended to the Commission to deny the special exception and variance requests due to the need for so many variances just to get the building up to city code and the lack of commercial space on the first floor since it is zoned TNB.

“I love that you want to do this landmark building, but four variances and two special exceptions on one site is a lot,” said Commissioner Judy Riddell. “It says to me that this is not the right thing for this site right now.”

The commission unanimously denied both requests during their meeting on Sept. 13.