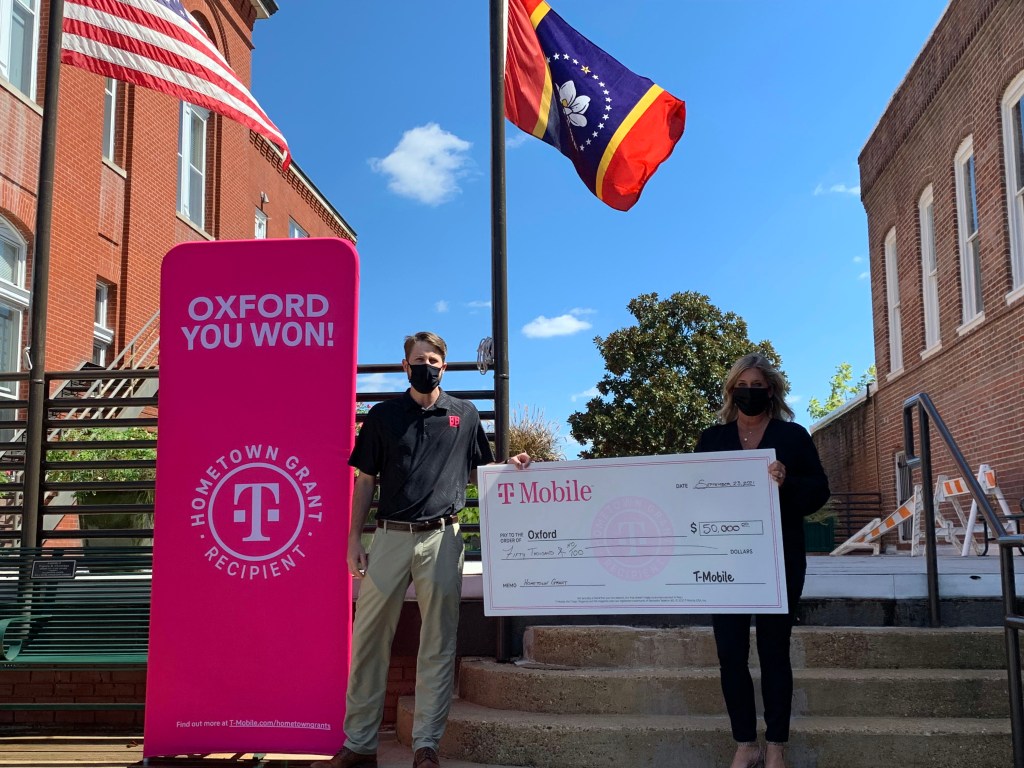 Oxford Mayor Robyn Tannehill, right, accepts a check for $50,000 from T-Mobile at the RSVP Plaza on Thursday. Oxford was one of 25 small towns selected by T-Mobile as a recipient of their Hometown Grant. The grant will go towards the new pocket park project that will be between City Hall and Square Books, Jr. (Jake Thompson)

The City of Oxford is planning to remodel the current RSVP Plaza into a pocket park and recently was awarded a grant to help with funding the project.

On Thursday, the city accepted a $50,000 grant from T-Mobile as part of the company’s Hometown Grants program. Oxford was one of 25 small towns awarded the grant by T-Mobile, which helps jump start vital community development projects.

Oxford’s project, which is turning the space between City Hall and Square Books, Jr. into an urban park for residents and visitors to gather.

“T-Mobile is in the business of connecting people and so are we,” said Oxford Mayor Robyn Tannehill. “This will be a great spot for people to connect. To have a cup of coffee. To watch the world go by. To wait while their kids shop in Square Books, Jr. or for husbands to sit while their wives walk around the Square. Whatever the reason, I think that it will be a great place for people to come and reflect.”

The city also received $250,000 out of a bond bill passed by state legislature that will go towards funding the park’s construction.

Currently, the 7,600 square-foot space is home to the city’s Parking and Code Enforcement offices. The building and concrete stage area will be demolished ahead of the park project starting.

According to Mark Levy, director of special projects for the city, the park is still in the early design stages and anticipates construction getting underway early next year with the park ready to be open by next fall.

The park area will mark the second type of pocket park to be constructed in the city. Last year, the pocket park located at the North Lamar Boulevard and Price Street intersection opened up to the public.