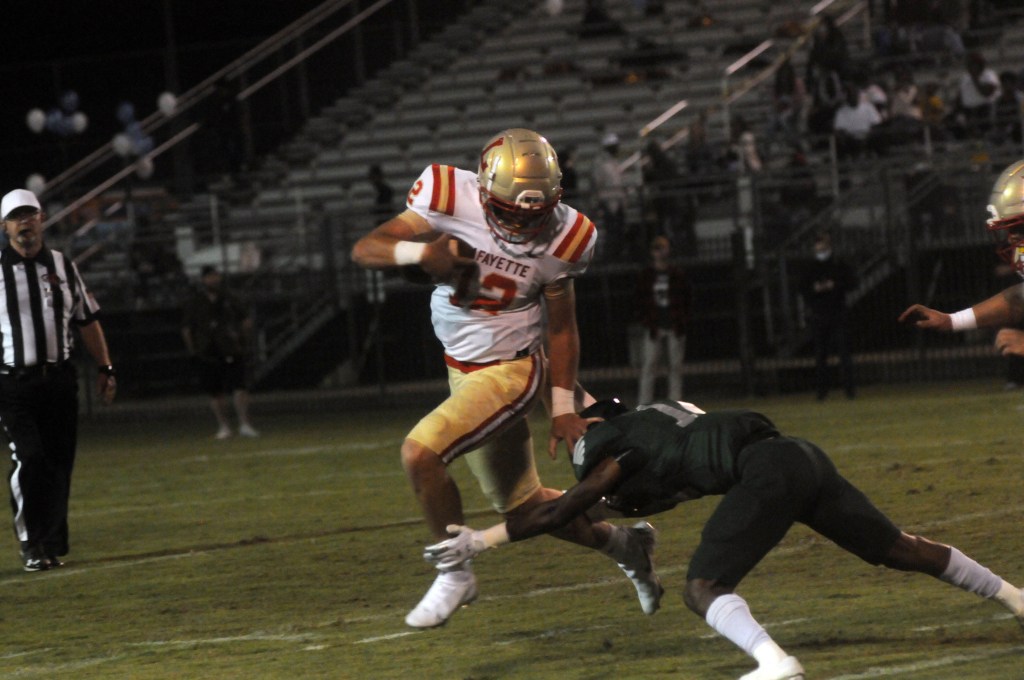 Lafayette’s Will Dabney (12) avoids a West Point defender during their game at Hamblin Stadium in West Point on Friday. The Commodores XXXXX (Jake Thompson/Oxford Eagle)

WEST POINT — Coming off their win over rival Oxford in last week’s Crosstown Classic, Lafayette seemed to have all the momentum heading into their region opener clash against West Point.

Funny thing about momentum is that it can fade away as quickly as it appears. The Commodores found that out in their 17-0 loss to West Point at Hamblin Stadium on Friday.

“You always hear it’s hard to do it two weeks in a row and that’s kind of what it looked like tonight,” said Lafayette head coach Michael Fair. “I don’t think we gave them our best shot and what we got to do is play as hard as we can and get another shot at them.”

As good as Lafayette (3-2, 0-1 Region 1-5A) looked in the final two and a half quarters a week ago, they looked just as bad to open the game against the Green Wave. A stagnant offense was not able to move the ball at all, hurting themselves in self-inflicted mistakes on top of it.

The Commodores had their best drive of the game come at the end of the third quarter when they got inside West Point’s 20-yard line. The promising drive was thwarted when Trikyus Woodall fumbled and the Green Wave (2-2, 1-0) recovered.

Beyond that one drive, Lafayette’s offense was lifeless most of the game, which was aided by the play of West Point’s defense.

“(West Point had) a lot to do with that and they have a good defense, like always,” Fair said. “I liked the plan we came over with, but we just failed to execute early. … We just came out flat and you can’t do that against a team like that. They’ll expose you and they did that tonight. They just whipped us.”

Running back Jay Reed rushed for only 12 yards before suffering an injury in the third quarter and not returning to the game. Woodall ran for 29 yards. Quarterback Charlie Fair threw for 69 yards.

West Point got the scoring started with a seven-yard run by quarterback Kahnen Daniels midway through the first quarter. The only other touchdown by the Green Wave was off a 69-yard run by Keyshawn Henley late in the second quarter.

Lafayette’s defense was tested in the second half when the Green Wave got inside the Commodore 10-yard line. The Green Wave were unable to find the end zone, settling for a 23-yard field goal.

Outside of Henley’s long run, the Commodores only gave up one other chunk play all game.

“Nickled and dimed us and that’s what they do,” Fair said of West Point’s offense. “They do a good job executing their game plan. … That’s who they are and that’s not like that surprised us. We know that’s who they are. Very few times I thought we failed to execute, defensively. I thought we played really hard and ran to the ball. We can’t keep putting our defense in the situation like we did tonight.”