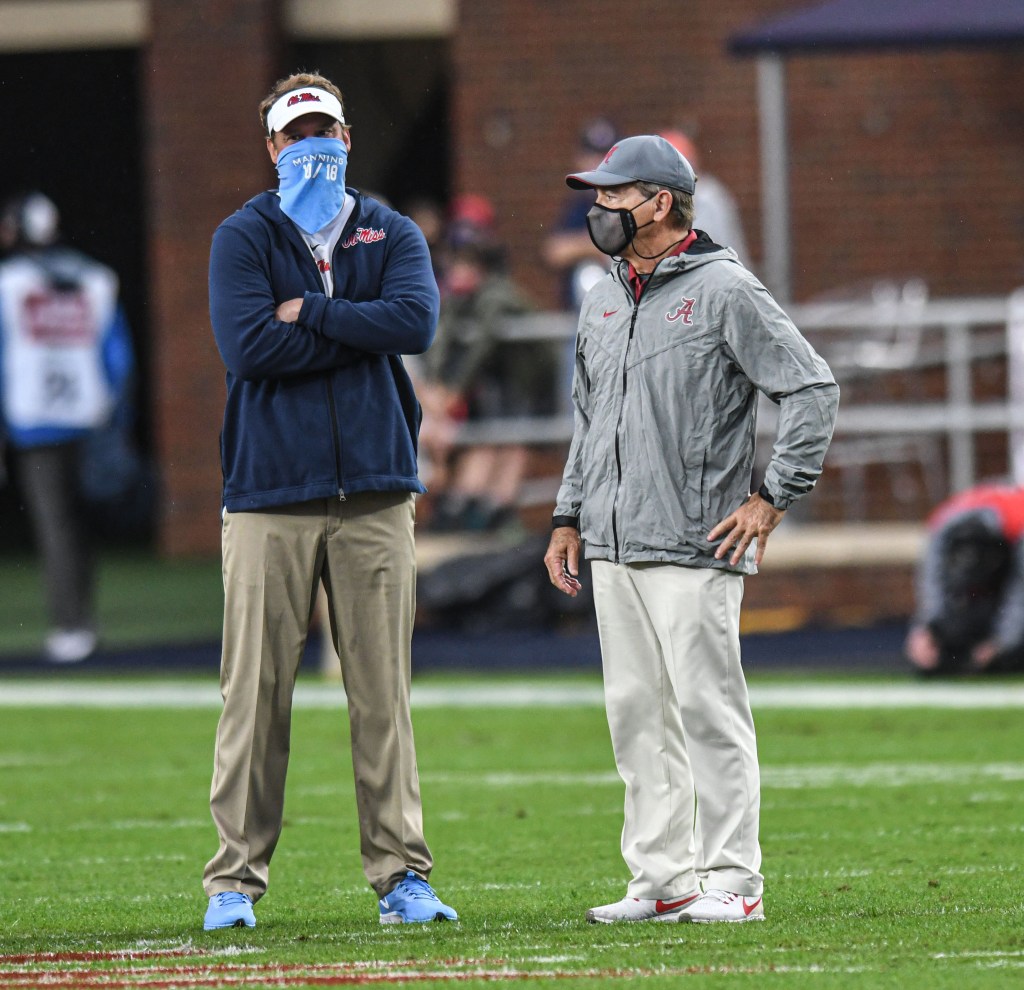 The week is here and all the talking is nearly over as No. 12 Ole Miss travels to No. 1 Alabama for one of the most anticipated rematches in recent memory.

For Lane Kiffin and Nick Saban, Saturday cannot come soon enough as balance of week of preparing for the biggest game of the young season while also fielding questions about each other and their respective teams.

As usual when this week rolls around, the subject comes up of another chance for one of Saban’s former assistant coaches to be the first to hand the longtime Crimson Tide coach a loss.

Last year, Kiffin presented possibly the biggest threat to ending the winless streak of apprentices trying to take down the teacher. The Rebels were keeping pace with the Crimson Tide, but eventually faded late in the second half.

This season is different. Ole Miss is once again a top 15 program after several years in the doldrums of the Southeastern Conference. The Rebel offense is one of the top in the country with a quarterback in Matt Corral who has suddenly jumped to the front of the line when it comes to Heisman favorites.

All of that is nice on paper, but this Saturday starts the true test of how the Rebels season will go and if Corral is a for real threat to hold up the Heisman Trophy in New York City come December.

Coming off their bye week, Kiffin and the Rebels returned to the practice field to continue preparation for Alabama. The second-year coach continued to compliment the Tide’s roster and talent.

“It’s good to be back at practice after the bye week, going out there on a normal Monday and continue to prepare for a great team, as we all know,” Kiffin said during his Monday press conference. “Like I said last week, I don’t see any holes in (Alabama). Like I referred to, with free agency, if they did have them at receiver or linebacker, they filled them.”

During a unique 2020 season with limited crowd capacities due to COVID-19 restrictions, Alabama traveled to Oxford. This year, full stadiums are back as the Rebels must venture into Bryant Denny Stadium for their first true hostile environment of the season.

Ole Miss (3-0) opened their season in Atlanta against Louisville, but that was in a neutral site where there were more Rebel fans than Cardinal fans. Saturday presents the first time Ole Miss will be in enemy territory and it happens to be against the top team in the country.

“So it will be very challenging, not just to play them, but over there,” Kiffin said. “If you think about it, we’ve never really played in front of crowd in two years because of COVID to go to a true road game. That brings challenges on its own, and so, we’ll have our hands full.”

The complimentary coach speak was not exclusive to Kiffin as Saban had his own thoughts about facing the Ole Miss offense. During their game last season, the Rebels put up 48 points and nearly 700 yards of total offense.

One thing the Rebels had success in was the ground game, rushing for 268 yards four touchdowns. The Crimson Tide (4-0) has struggled against the run this season, giving up 115 yards per game through their first four games.

“Ole Miss has an outstanding team,” Saban said on Monday. “I think they’ve got like 17 starters back from a team that won (five) games last year. Lane does an outstanding job with their offense. Their overall team is improved in every category – defense, special teams. They really are playing extremely well. This is one of the best offensive teams in the country, no doubt.”

Ole Miss and Alabama are set to kickoff at 2:30 p.m. on Saturday. The game will are on CBS.