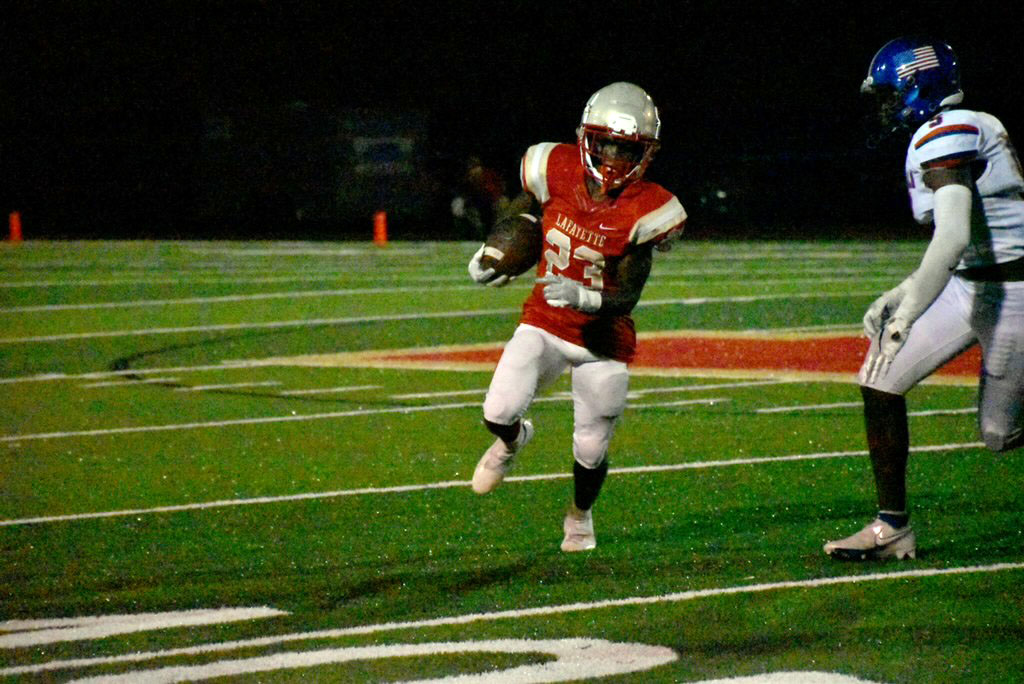 Lafayette’s Dee Gipson (23) runs past a Saltillo defender during their game at William L. Buford Stadium on Friday. The Commodores won 47-10. (Jared Redding)

It didn’t take long for the Lafayette Commodores to put the game away and have their fans focus on homecoming festivities.

The ‘Dores jumped out to a 28-0 lead in the first quarter and didn’t look back en route to a 47-10 win over the Saltillo Tigers in Region 1-5A play. Coming off a disappointing region opening loss at West Point, Friday’s homecoming matchup was a breath of fresh air.

“Any win is a big win,” LHS head coach Michael Fair said. “We worked hard to enjoy victories like this because this district is so tough. You can’t take any of these wins for granted. I was proud of the way we came out after last week’s performance. We executed early.”

Jay Reed led the offensive outburst with three scores on the ground while Trikyus Woodall made defensive and special teams play with a 77-yard punt return touchdown and an interception late in the first half.

“(Reed is a good back, we know that,” Fair said. “He gets better as the game goes along. We had opportunities to give it to him tonight…(Woodall) has been in our program for a long time. The Woodall name carries a lot of weight here at Lafayette. He’s the next great one. It seems like he makes more plays every week.”

Defensively, Lafayette had few issues with the air-raid offense early on before the backups came in to conclude Friday’s game.

“I don’t think we’ve faced an offense like that ever since I’ve been here at Lafayette, one that’s willing to do that all night long,” Fair said. “It’s a testament to our coaches. Our defensive staff had a great game plan tonight. We mixed things up, man, zone, pressure and stuff like that. Our guys kept them off balance.”

The dominance started on the very first play of the game. Kylan Egerson picked off Chance Johnson and took it 39 yards to the end zone, but a penalty forced his team to start at Saltillo’s 33-yard line. Six plays later, Jay Reed scored his first of two first half touchdowns from five yards out. Just like that, Lafayette had a 7-0 lead just over a minute into the contest.

After a barrage of penalties on both squads, Lafayette faced a 2nd-and-31 barely inside Tiger territory. That didn’t matter as Charlie Fair found Kylen Vaughn open down the middle for a 48-yard touchdown pass. Not long after, Reed scored his second rushing TD from 16 yards out and Lafayette had a 22-0 lead with 2:21 left in the opening quarter. After Saltillo moved the chains offensively for the first time, the Tigers punted and Trikyus Woodall made them pay. Woodall bobbled said punt, but took the ball 77 yards to the house and made it a 28-0 score at the end of the quarter.

Lafayette’s offense would eventually stall and Saltillo got their air-raid offense going. The Tigers finally got on the board first with a 28-yard field goal and used an onside kick on the ensuing kickoff to steal a possession. However, that was all for not as Jeremiah Tanner jumped the Saltillo route and scored a 48-yard pick-six with 4:43 left in the first half. Saltillo made their way inside the Lafayette red zone late in the half, but a Woodall interception preserved a 35-3 lead going into the locker room.

In the second half, Reed scored his third touchdown from 52 yards out while Dee Gipson added another score on the ground. Saltillo later had their first and only touchdown of the night, but it was far too late.

The Commodores will hit the road next Friday night, October 8 when they continue Region 1-5A play against the Columbus Falcons. Kickoff is set for 7 p.m.