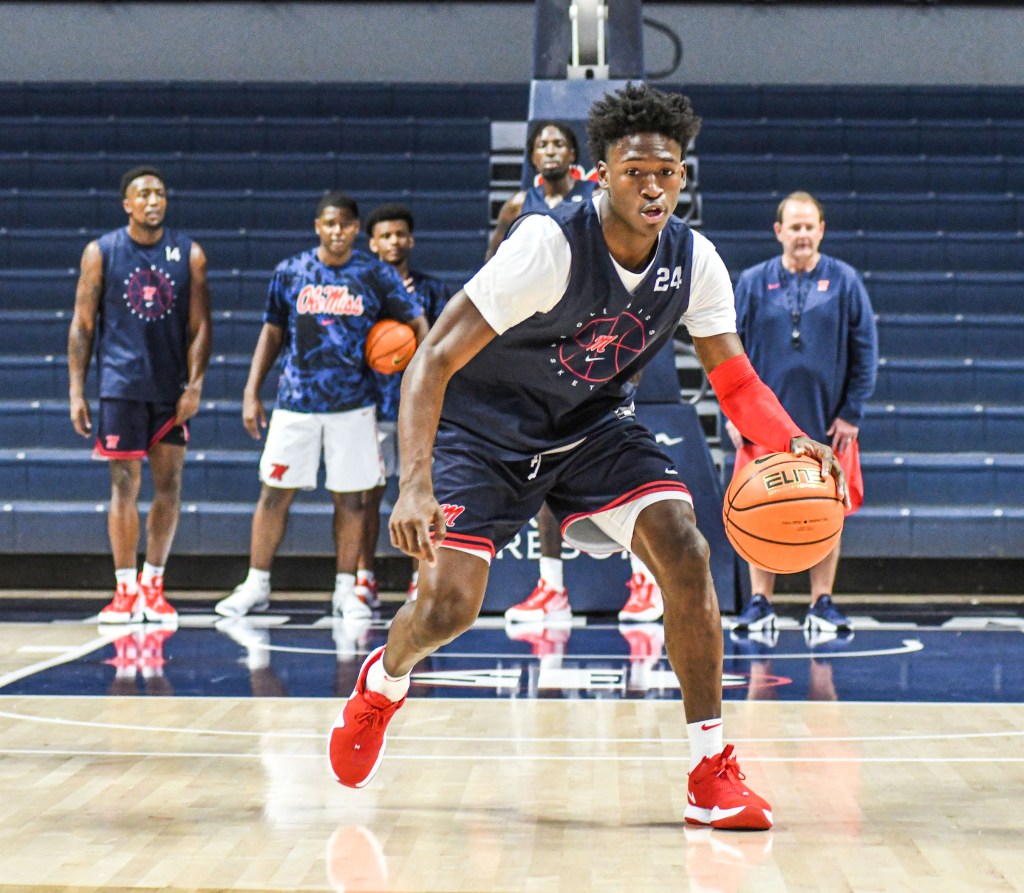 The Ole Miss men’s basketball head coach met with the media prior to the first official practice with his team for the 2021-22 season. With their exhibition game against Trevecca Nazarene University set for Nov. 5, the Rebels have a little over a month before the season gets in full swing.

“We have a ton of work ahead of us,” Davis said. “As soon as football starts, these weeks just start peeling off and that’s exactly been the case because September has just flown by.”

Coming off a disappointing loss to Louisiana Tech in the opening round of the NIT last March, the Rebels are looking to have a longer stay in the postseason and be a part of the NCAA Tournament and March Madness next Spring.

To do that, they must look to fill the holes left by Devontae Shuler and Romello White after graduating a season ago. Senior guard Jarkel Joiner is one person who is expected to take on a larger role and lead the offense. The Oxford native had a slow start to last season but came on during conference play, averaging 12 points and shooting nearly 40 percent from the floor in 28 games played.

Davis is high on the returning Joiner, who has two more season of eligibility left due to the COVID rule established spring of last year, and is already putting high expectations in place.

“It’s unbelievable how much improvement he’s made since this time last year,” Davis said of Joiner. “His assist-to-turnover is almost three-to-one in our practices. We keep every stat, but it’s almost three-to-one since June, and that’s what really good guards can do. … His body’s changed, and you can see it. He’s gained weight and now he’s consistently over 180 pounds. He’s developed into one of the better guards in all of the SEC.”

Another player Davis is high on after summer workouts is sophomore Matthew Murrell. The Memphis native joined Jarkel as one of only four Rebels play in all 28 games a season ago.

Murrell averaged just over four points per game but is another player that Davis has seen take a big step forward, but now wants to see all those pieces come together when it counts.

“There’s no better athlete than Matt in all of college basketball,” Davis said. “Run, jump, strength, speed, he’s got it all. Now we have to see those athletic plays show up in the everyday possessions. Defending, rebounding, running and spreading the floor. He can catch some of the toughest lobs and dunk them in, but how many plays do you get like that? He’s got to get all of those great physical attributes into day-to-day possessions, and I mean every possession. When Matt does that, then boom, he’ll just jump up and be one of the elite players.”

Along with returning players, Davis added some key pieces from the transfer portal. Four Rebels were on other teams last year, including sophomore Jaemyn Brakefield. The Jackson native returns to Mississippi after spending a season play for Mike Krzyzewski at Duke.

Another transfer is center Nysier Brooks who is coming from Miami. Brooks played in all 27 games for the Hurricanes a season ago, averaging 7.4 points, 5.8 rebounds and a block per game.

Top Mississippi prospect and the Rebels first McDonald’s All-American, Daeshun Ruffin is returning to the court after suffering an injury during a pickup game back in hometown of Jackson over the summer. Davis expects Ruffin to be ready by November and is back to physical contact in practices.

“(Ruffin) has gone full bore, he’s in all of our physical contact drills,” Davis said. “Now we’re wearing the chips that all of the NBA teams are wearing, so it does kind of manage guys, especially if they’re coming back from an injury. He’s been in really physical practices and he’s done well. His conditioning is not what it needs to be, but that’s what we expected after him being out.”

Ole Miss will open its season against New Orleans on Nov. 9.