RUNNING CHARGE: Oxford dominates Tupelo to stay undefeated in 2-6A 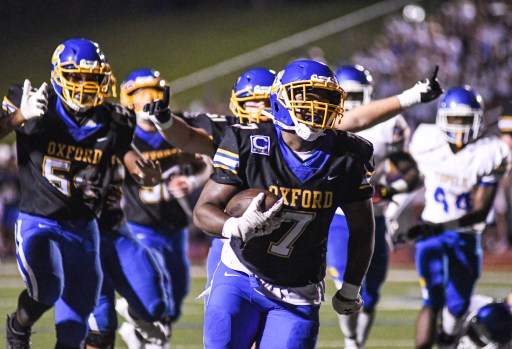 Oxford High’s Omar Howell (7) breaks free for a touchdown in the 2nd quarter against Tupelo at Bobby Holcomb Field in Oxford, Miss., on Friday, Oct. 1, 2021. Howell was among six Oxford players selected to the 2022 NEMFCA All-Star game. (©Bruce Newman) 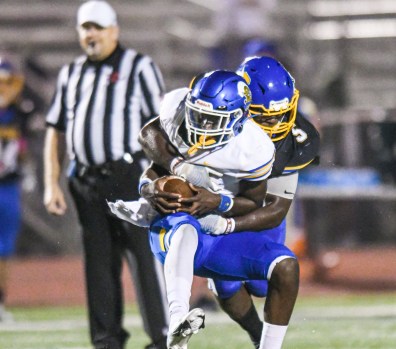 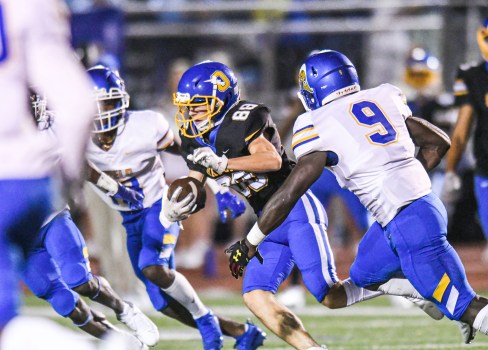 All the talk entering Friday’s pivotal Region 2-6A matchup between Oxford and Tupelo was mainly focused on the play of the Golden Wave’s defense, but after it the Chargers defense took center stage.

The Oxford defense stifled Tupelo in the Chargers 22-6 win at Bobby Holcomb Field.

“I think for sure it was our most complete game thus far, really in all three phases,” said Oxford head coach Chris Cutcliffe.

Nothing the Golden Wave’s offense did worked as Oxford (4-2, 2-0 2-6A) smothered them for four quarters. In the first half, the Chargers forced Tupelo to punt on their first three possessions and caused a turnover on downs on their fourth possession.

The Chargers defense came away with two takeaways, a fumble recovery and an interception on top of multiple sacks.

“I think we played good team defense,” Cutcliffe said. “We were solid in our assignments. (Tupelo) has some talented skill guys and we didn’t let them get loose.”

Tupelo’s defense was highly touted leading up to Friday’s game, but the Charger offense had its way with them all night. Oxford also benefited from some timely plays by quarterback Michael Harvey.

Harvey finished with 124 passing yards and a touchdown, but also threw three interceptions in the second half.

“I was proud of (Harvey). I thought he played well,” Cutcliffe said. “One of the interceptions was just kind of an aggressive call on third down, almost works out like a punt. Those are things we need to address and clean up and get better moving forward.”

After finding success last week against Murrah, Oxford continued to rely on its run game on Friday. The Chargers gouged Tupelo (5-1, 1-1) on the ground for nearly 200 yards and two touchdowns.

Omar Howell bounced off a couple would-be Tupelo tacklers to score on a 17-yard run in the second quarter.

After a slow start to the second half, Oxford returned to their success from the first two quarters and went back to its ground attack. Roman Gregory punched it in from two yards out on the first play of the fourth quarter for the winning margin.

“I think it started with the ability to run the football and offense is a lot easier to play when you can run the ball effectively,” Cutcliffe said. “I think that opened up our passing game, our play action game. We executed at a higher level than we have in a while.

Oxford concluded a two-game homestand and will now spend much of October away from home with a three-game road trip. The Chargers start the stretch at Germantown next Friday at 7 p.m.