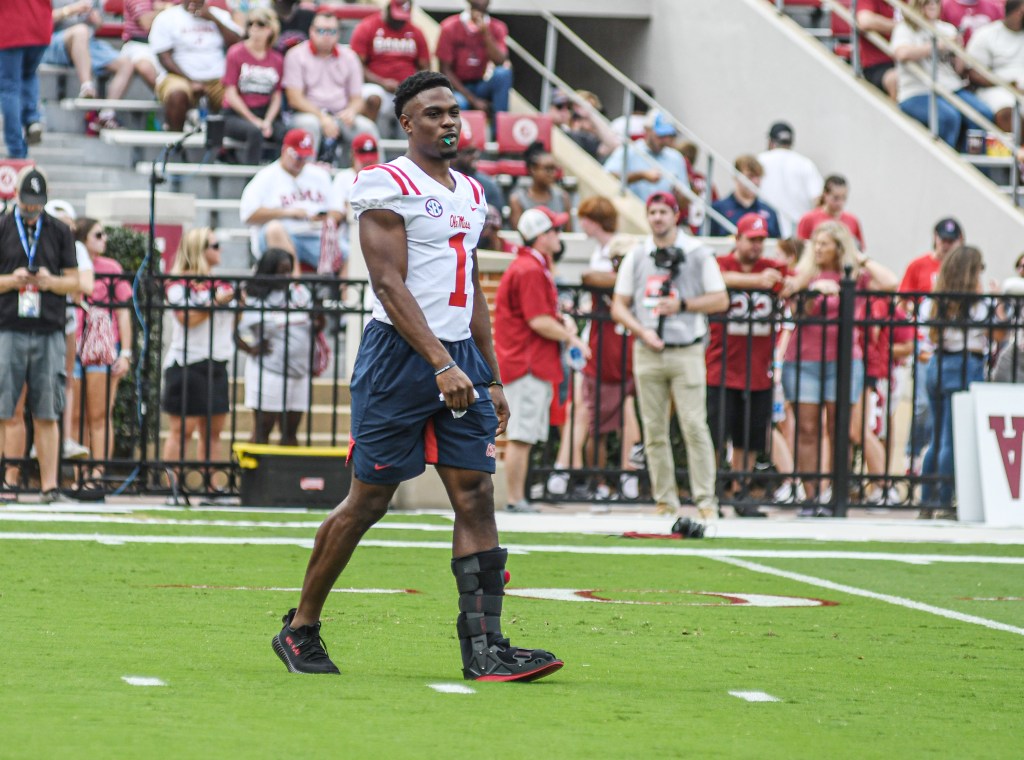 Ole Miss wide receiver Jonathan Mingo takes in pregame in a walking boot ahead of their game against Alabama at Bryant-Denny Stadium in Tuscaloosa, Ala. on Saturday. Mingo suffered a broken foot during practice last week and is out indefinitely. (©Bruce Newman)

TUSCALOOSA, Ala. — The Ole Miss offense missed Jonathan Mingo on Saturday in their loss to No. 1 Alabama and will continue to miss him for much of the rest of the season.

Pregame, Mingo could be seen walking around Bryant-Denny Stadium in a jersey, shorts and a walking boot on his left foot a day after it was reported he suffered a broken foot. Ole Miss head coach Lane Kiffin did not have much of an update on Mingo’s status or prognosis during his post game press conference.

“That was a late in the week thing,” Kiffin said of Mingo’s injury. “I feel down for the kid, he was in tears wanting to play in this game and has worked as hard as anybody. Felt bad for Matt (Corral) losing him. Found out Thursday he wasn’t going to play, so we’ll see.”

The loss of Mingo puts a dent in the offense as he was starting to become a reliable second target behind Dontario Drummond through the first three games. Mingo had 15 receptions for 290 yards, second only to Drummond’s 20 catches for 339 yards and four touchdowns.

Sophomore Jadon Jackson got the start out wide against Alabama in Mingo’s absence. Jackson finished with four catches for 30 yards.

How the depth chart shakes out for Arkansas next Saturday and moving forward will be interesting as replacing Mingo is now the mission in the receivers room.