Risk taking fails to pay off for No. 12 Ole Miss in loss at No. 1 Alabama 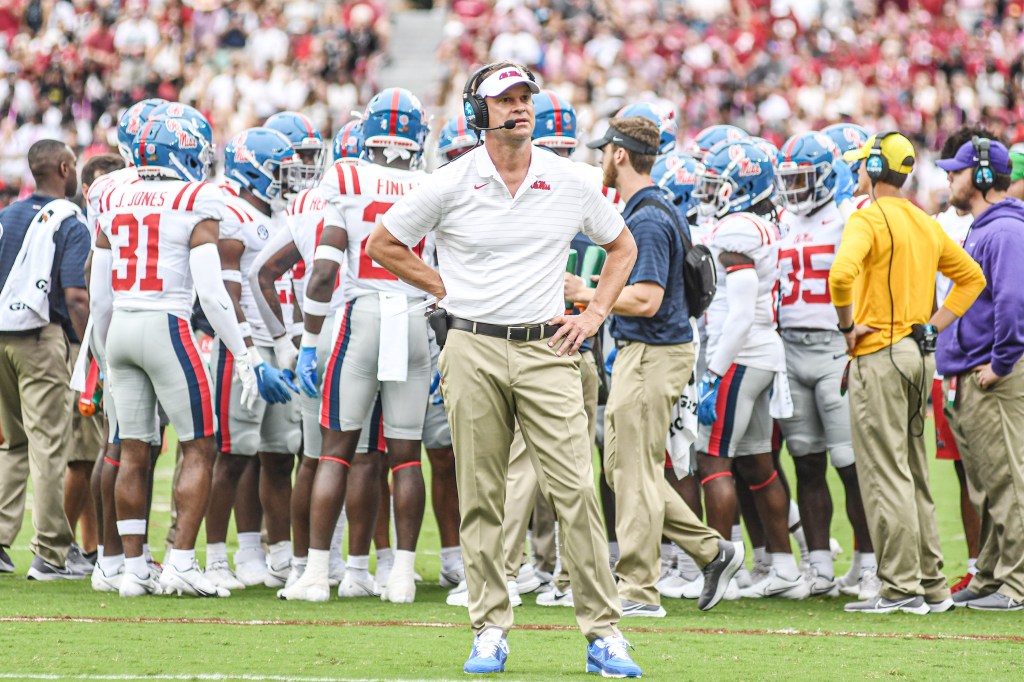 Head coach Lane Kiffin looks at the video board after Ole Miss failed to get a first down on a 4th down play against Alabama at Bryant-Denny Stadium in Tuscaloosa, Ala., on Saturday. The Rebels lost 42-14. (©Bruce Newman)

TUSCALOOSA, Ala. — Ole Miss came into Saturday’s top 15 matchup against No. 1 Alabama with the prospects of starting conference play off in a big way and setting up a potentially special season.

Unfortunately for the No. 12 Rebels, that did not happen as failed risks on fourth down and a high-powered offense halted led to the Crimson Tide coming away with the 42-21 win at Bryant-Denny Stadium.

Ole Miss (3-1, 0-1 Southeastern Conference) came out with an opening drive that ate up just over six minutes on the clock, but resulted in zero points and a potential turning point for Alabama. Jerrion Ealy was stopped at the Crimson Tide six yard-line on 4 & 1, giving the Tide the ball and 94 yards to go on their opening possession.

The Rebel defense was unable to slow down Alabama quarterback Bryce Young and the offense, who cashed in on the risky gamble by Lane Kiffin.

The risk taking did not stop for Kiffin on the first drive. The Rebels attempted to convert on fourth down five times, succeeding twice — both on the opening drive. The other three failed attempts gave Alabama (5-0, 2-0) short fields and they scored touchdowns on two of them.

By the time halftime came it was a 35-point Crimson Tide lead.

“I’m sure (I) got killed going for it on fourth down, but that’s analytics,” Kiffin said. “We believe in our players and it don’t work all the time. When it doesn’t work and you follow the book, it doesn’t look good. But also it’s why it’s analytics and not just doing whatever you want to do. Because you can easily get a punt blocked, you can give up a punt return for a net of nothing and be exactly the same.”

In the second half, the story was a little different with the Rebel defense keeping Young and the Alabama offense in check and holding them to two touchdowns. Young was sacked three times and threw an interception, which was picked off by Keidron Smith in the endzone in the third quarter.

For the Rebel offense it was a game where they struggled to have anything remotely resembling the success they experienced in the first three games. The Alabama defense swarmed constantly, getting penetration against the offensive line and finding themselves in the backfield constantly to blow up plays.

In the showdown between Heisman Trophy front runners, Matt Corral did not have a poor performance like the ones against Arkansas and LSU a season ago. The Rebel quarterback completed 21-of-29 passes for 213 yards and a touchdown. Corral also rushed for a touchdown.

“It was us just trying to catch a rhythm and then go for the shot play,” Corral said. “Every time we got our rhythm it was either a holding (penalty) or it was something negative towards us and we couldn’t (get a rhythm) because (the Alabama defense) was getting their rest. Our job was to wear them out and then take a shot deep. We didn’t get to that as much as we wanted to.”

Corral’s numbers were similar to Young’s, who finished with 241 yards and two touchdowns to go with the turnover.

The ground game for Ole Miss was nonexistent despite finding success late in the game. The Rebels rushed for 78 yards and two touchdowns. Henry Parrish, Jr. led the team with 47 yards on 11 carries while Snoop Connor scored the other rushing touchdown.

Ole Miss returns home where they will host Arkansas (4-1, 1-1) next Saturday. The Razorbacks entered the day ranked No. 8 but were shutout by Georgia in a 37-0 rout on the road.