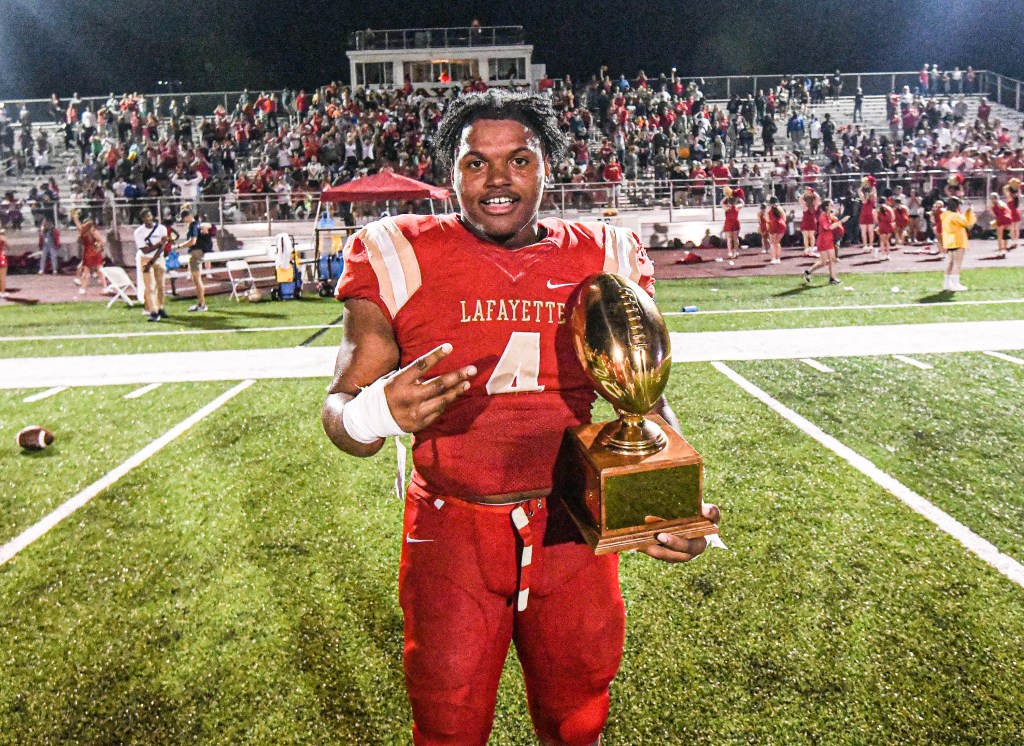 Lafayette's Mario Wilbourn holds the Crosstown Classic trophy at William L. Buford Stadium after the Commodores defeated the Chargers on Sept. 17. Wilbourn is one of five Lafayette and Oxford players selected to this year's annual all-star football games. (©Bruce Newman)

The rosters for both the Mississippi/Alabama and Bernard Blackwell North/South All-Star football games were announced on Wednesday with Lafayette and Oxford players and coaches included on them.

The rosters were presented as part of a press conference at the Mississippi High School Activities Association (MHSAA) headquarters with the coaching staffs for the games present.

Representing Lafayette in the Mississippi/Alabama game is linebacker Mario Wilbourn. Defensive lineman DJ Burgess was selected for the North team in the Bernard Blackwell game.

Through six games, Burgess has a team-high in tackles with 49 and sacks with nine. Wilbourn is second with 47 tackles and has recorded a sack.

“It means a lot,” said Lafayette head coach Michael Fair of Wilbourn and Burgess’ all-star selections. “We’ve been fortunate the last several years to have some all-stars and and some guys that’s played at the next level and (Burgess and Wilbourn) fit right in there with any of the great ones that we’ve had. Mario and DJ Burgess, they’re two of the better ones out there. What they’ve meant to this school, the community and this football team has been tremendous.”

For Oxford, offensively lineman Stratton Smith was named to the Mississippi/Alabama roster while head coach Chris Cutcliffe was named to the coaching staff as the scout coach. Linebacker and punter Ben Goubeaux and linebacker Keegan Wilfawn were named to the North team.

Through five games, Goubeaux has recorded 45 tackles and a sack while Wilfawn has 33 tackles.

“We are very proud to have Stratton Smith, Keegan Wilfawn, and Ben Goubeaux representing us in All Star games,” Cutcliffe said. “They are without a doubt outstanding players, but even more so outstanding young men.”