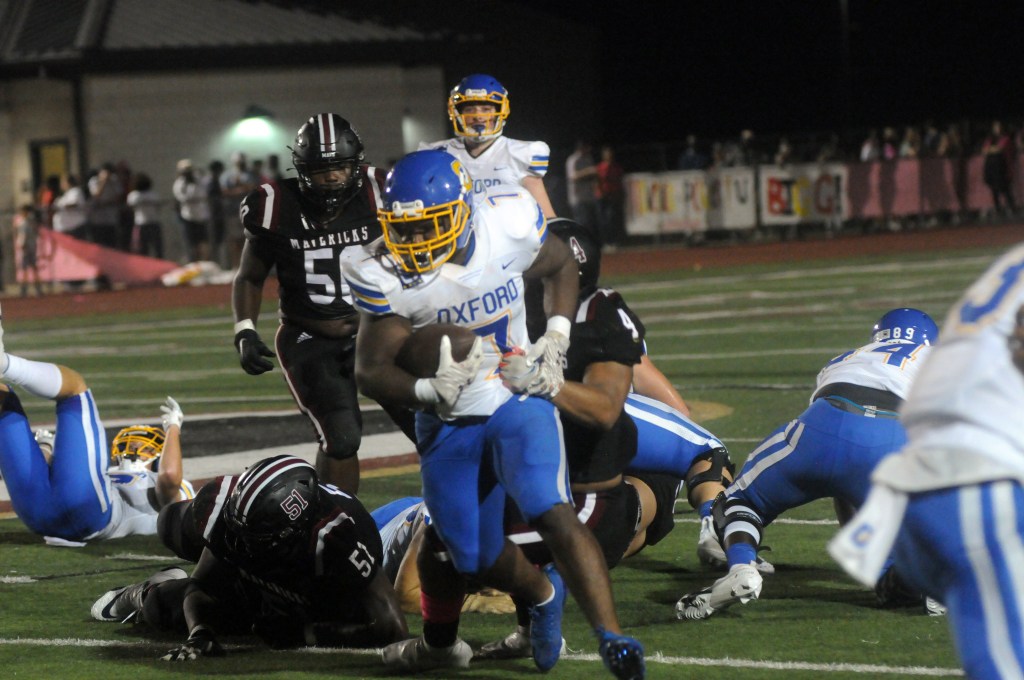 MADISON — Oxford’s football team may just want to start spotting teams points prior to the game because they seem to thrive rallying from behind.

The patented comeback was in full effect on Friday as Oxford rallied for the 37-28 victory over Germantown at Germantown High School. The Chargers were down 21 points, which marks the largest comeback in program history.

Last year’s 20-point deficit at Southaven was previously the largest comeback prior to Friday.

“Our players deserve a lot of credit because they don’t back down in the face of adversity,” said Oxford head coach Chris Cutcliffe. “They do a tremendous job of playing closer together in tough circumstances early.”

Turnovers plagued Oxford (5-2, 3-0 Region 2-6A) in the first half with two special teams turnovers on a kickoff return and a punt return along with a fumble by quarterback Micheal Harvey.

Germantown took advantage of those miscues, along with some untimely Charger penalties on defense, for the 21-0 lead midway through the second quarter.

The Chargers were able to stay on the field to put together a sustainable drive on offense and found some life when Harvey hit a pop pass to Cashe Shows for the 18-yard score with 2:59 remaining in the half.

Cutcliffe called upon some creativity in the final seconds of the first half, which seemingly sparked the second-half surge. Harvey looked to be set up for the kneel to end the half, but then Roman Gregory took it 85 yards for the surprise score as the clock expired to make it only a seven-point deficit entering halftime.

“That was a huge play,” Cutcliffe said. “Roman made a big time play and that’s something we kind of had in our back pocket if the right situation ever came up and it did.”

In the second half, the Chargers continued where they left off for 34 unanswered points before Germantown stopped the bleeding with a touchdown in the fourth quarter. After trailing by 21 points, Oxford outscored the Mavericks 37-7.

Along with Shows’ touchdown reception, Jack Harper also hauled in a touchdown off a 16-yard catch.

Germantown (3-4, 1-2) got two rushing touchdowns from Branson Robinson and a four-yard quarterback keeper by Drew McClucsky

Oxford stays on the road next week, traveling to Clinton on Friday. Kickoff is set for 7 p.m.