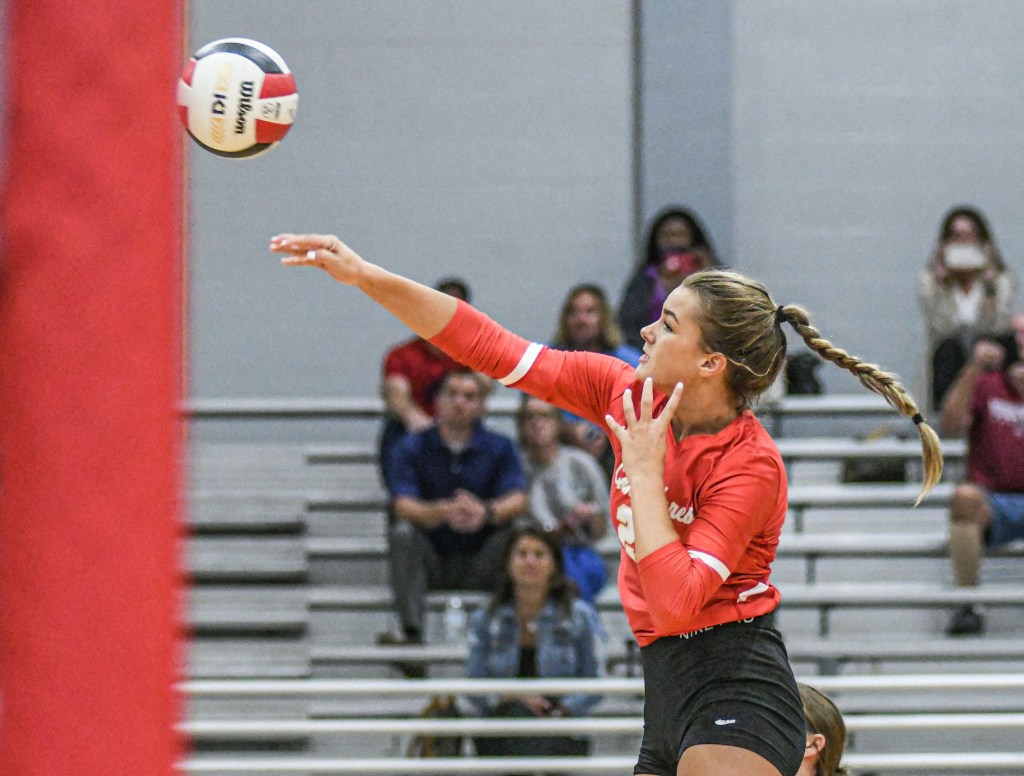 Lafayette’s Kailey Gooch returns a volley during their match against Ridgeland at Lafayette High School on Thursday. The Commodores won 3-0 (25-11, 25-14, 25-13) to advance to the Class 5A North Half championship (Bruce Newman)

The Lafayette volleyball team is a win away from playing for something they have not yet achieved — a state championship.

Despite having to not rely on too much effort in their first round sweep of Holmes County Center on Tuesday, the Titans managed to make Lafayette’s second round match slightly more competitive.

Each set started with Ridgeland jumping to a small lead with the Commodores putting a run together mid set to earn the win. In the third set, the Titans held a 6-3 lead and looked primed to potentially force a fourth set. Instead, the Commodores responded and closed out the match with a 22-7 run.

“I have a lot of confidence in my team and I think even when we struggle I know that if we play our game to our maximum ability I know that we’ll come out on top,” said Lafayette head coach Zoe Storck. “It was good to see them fight, rally. Some teams, that doesn’t happen so it was good to see that from my that even when we’re down they know in the back of their heads they can come back and win.”

With the first two rounds behind them it now sets up yet another showdown with Region 1-5A foe Lake Cormorant with a berth to the state championship game in Clinton on Oct. 23 at stake.

This season, Lafayette has re-written the narrative in their history with Lake Cormorant. The Commodores swept the Gators with a 3-2 win at home on Sept. 9 and a 3-0 win at Lake Cormorant on Oct. 6 to clinch the region title. Lafayette also defeated Lake Cormorant 2-0 in a tournament on Sept. 11.

Having the newfound string of success against the Gators gives Storck and her team a high level of confidence heading into Tuesday’s semifinal match.

“We’ll definitely focus on what we’re walking into versus that (Lake Cormorant) offense on Tuesday,” Storck said. “Good thing is we’ve seen it. We know what to prepare for. … I think it gives us confidence. I just think we know where that ability is for us, but still a lot of hard volleyball left to play.”

Lafayette will host Lake Cormorant at the Lafayette High School gym on Tuesday at 6 p.m.